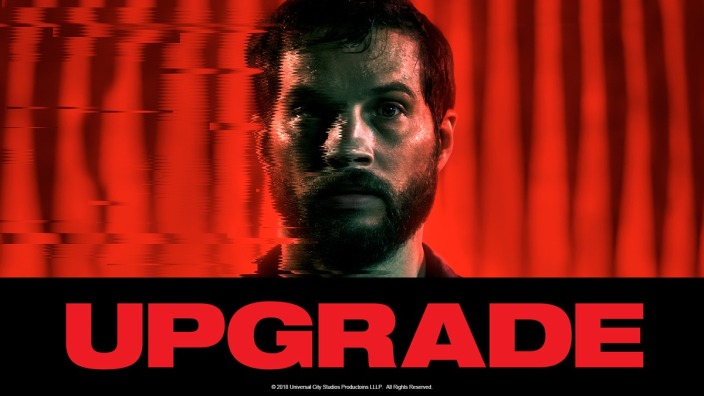 Leigh Whannell creates a Sci-Fi, Action, Thriller for the Ages.

With The Invisible Man upon us, I think it’s important to shine a light on Director, Leigh Whannell’s directorial debut: Upgrade. A sci-fi, action, thriller blended together in one perfect combo, ‘Upgrade’ more then packs a punch on story, action, and atmosphere; it delivers on all fronts.

By the look of it, you wouldn’t expect much going into Whannell’s ‘Upgrade’. A $5 million dollar budget, a no-name director, and a star that everyone confuses for Tom Hardy, ‘Upgrade’ had a lot going against it. Despite the odds, Upgrade succeeds on many fronts but first and foremost, the story.

Starting out as a simple ‘day in the life’ tale of mechanic Grey Trace and his wife Asha Trace. To save you from spoilers, I’m going to have to stop right there if you really want to have your mind blown in the third act. But trust me on this, after a horrific accident mames Grey and kills Asha, Grey goes through the process of transitioning to life as a quadriplegic.

After this, Grey is implanted with a new piece of technology known as STEM, which gives him the ability to walk, run, fight, play basketball, fight really well, go to the park, fight extremely fierce and brutally execute his enemies: I think you get my point. It’s all good stuff here and the film constantly builds on its original concept with absolutely blistering results. There is a fake-out at the end of Act 3 that really got underneath my skin, but the reveal following that, actually justifying the previous move was something I fell in love with. It didn’t deviate into cliche territory either, the originality is all there and honestly, I’m here for it.

One thing I wanna talk about right off the bat (if you couldn’t tell already) is the action. The action in this film really REALLY stands out. Whannell has crafted action that works within the context of the story and characters. STEM is a program that is designed to think 50 steps ahead of his competition and counter it at every chance it gets.

This makes the action quite inspired, seeing Logan Marshall-Green having to pull off this fight choreo while looking like someone else is controlling his body is really something to be marveled. While there isn’t a lot of action, the scenes that utilize it do it to the best of their capabilities and I really appreciate that. It’s so refreshing to see a film made on such a low budget have tight, fast, fierce and well-done action.

Another positive that really left an impression on me was the production design. My god, did the environments and world look really, really awesome. I really felt what it was like to live in this (not?) distant future with self-driving cars and cyborgs with guns inside of their arms that can be loaded on the inside of their bicep as if you would load buckshot into a 12 gauge. The design of the cars, the weapons and the places our characters inhabited were characters of their own. Every location had a distinct look and vibe. This stylization can make or break any film for me, but thankfully Upgrade had me fall in love.

Unfortunately, the two main issues I have with this movie are right up in front and there’s really nothing you can do to circumvent them if you’re trying to tell this kind of story. To begin, the pacing for about the first 30 minutes is slow, then after that, it is a non-stop ride with brief moments to breathe. Once Whannell got me to understand the context of the protagonist and his plight, I was invested, up until that point, I did feel a little bored at times. However, the issue with the pacing pales in comparison to the issue with the characters.

Jesus where do I start, the actors in this film are all doing fine. Nothing Oscar-worthy to speak of here, but nothing that’s gonna get nominated for a Razzie either. There is one stand out scene by Marshall-Green that really pulls at your heart, but other then that nothing to write home about. I think part of this issue has to do with the characters. Although the dialogue is sharp and quick, there is no development for anyone’s character besides Grey and quite honestly, STEM. Did I mention that STEM is fully able to communicate with Grey? No? Well, it’s great and I love every bit of it.

Grey and STEM’s back and forth really builds their relationship throughout the film, it’s just unfortunate that no other characters in this movie seem to have that kind of depth or relationship to one another. Eventually, this leads to something I REALLY don’t want to spoil. Either way, Grey and STEM are really the only characters that get their due.

At the end of the day, Upgrade is a fantastic film. It has a lot of great ideas, themes, and a perfect world to play with them all. On top of that, there is breathtaking, brutal action and a great original story to boot. Personally, I don’t think this film gets enough credit, and with Whannell’s newest release upon us, I feel it’s best to look back and see how we got here.

Thanks so much, reading, if you like this review, feel free to check out our review of Sonic the Hedgehog! Don’t forget to like, share and stay tuned with us for all things nerdy!

MY HERO ACADEMIA: HEROES RISING GOES BEYOND PLUS ULTRA! (REVIEW) Next post