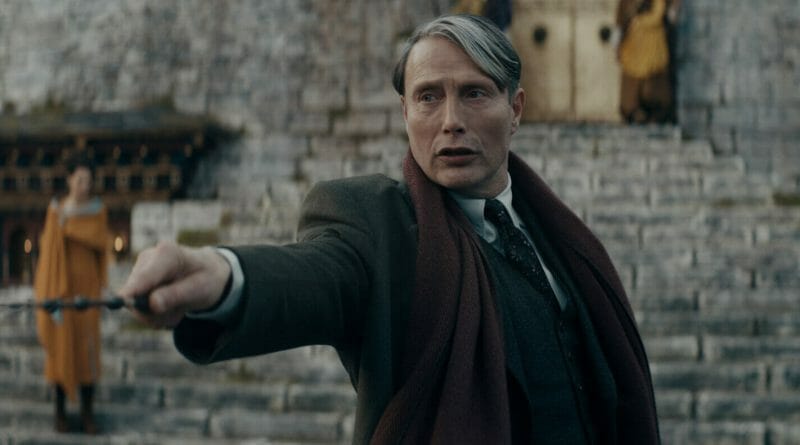 
Fantastic Beasts: The Secrets of Dumbledore is an improvement from the sequel and manages to capture the magic from the original.

‘Fantastic Beasts: The Secrets of Dumbledore’ is actually a better movie than its sequel. It’s no secret that the sequel to this series was a complicated mess of a movie that had even the most die-hard Harry Potter fans scratching their heads. Thankfully, that is not the case here. Director David Yates captures the magic he is known for with his past works in the Harry Potter universe with this new installment.

Now before I talk more about the movie let me just address the elephant in the room. Is Mads Mikkelsen better as Gellert Grindlewald than Johnny Depp? The answer is yes. While I do think the reason behind Johnny Depp’s recast was unfair, Mads Mikkelsen does give a much better performance as Grindlewald. By stripping away the theatrics, Mads Mikkelsen made Grindelwald a more sinister; more dynamic performance as the main antagonist in this film. He also has great chemistry with Jude Law’s Dumbledore which is important given their romantic past. He is menacing when he needs to be as well as calculating. I just wish he was Grendalwald from the beginning so this series would feel more complete.

The acting in this movie is top-notch. The stand-out is Jude Law as Albus Dumbledore. He gives a layered performance of the beloved character. He has to fight Grindelwald with strategy. It feels like a chess game between the both of them, using people to win over the other. You can feel the pain he feels when he talks about his past toxic relationship with Grindelwald. Another stand-out would be Dan Fogler who plays Jacob Kowalski. He brings a lot of heart into this movie. His wonderment at all the magic around him is endearing to watch.

They never really make up a reason why he is needed for Dumbledore’s plan but I smiled whenever he was on screen so I can’t complain. Newcomer Jessica Williams as Eulalie Hicks was a refreshing addition to the cast as well. Her performance was full of energy. The rest of the cast was also great. Eddie Redmayne as Newt Scamander is still our main character and he has a lot more to do here in this film than in the previous, overall being better utilized.

The VFX in this movie is amazing as always. The mythical creatures in this movie look life-like. The details in just their fur and scales show how much detail was put into this. The designs for these creatures are very creative. The magic was enchanting to look at. The Wizarding World of Harry Potter movies always delivers when it comes to its visuals with magic. This latest installment in the Fantastic Beasts series is no different. The fight scenes were engaging to watch. The spells are creative and visually engaging. George Richmond does an outstanding job as the film’s cinematographer.

Steve Kloves wrote seven of the eight Harry Potter films but Steve Kloves was not as involved with the Fantastic Beasts films. Serving as an executive producer instead of a writer. After J.K. Rowling’s subpar writing of ‘Fantastic Beasts: Crimes of Grindelwald,’ the story needed some revitalizing.

Thankfully, Steve Kloves came back as the screenwriter for this film which helped in the long run. I had such low expectations from the previous film that getting a cohesive and well-written story this time around meant a lot to me as a Harry Potter fan. James Newton Howard (Peter Pan, The Dark Knight, Space Jam) composed the film’s score and delivers a soundtrack that is just as magical as the film’s effects. It really sets the fantastical tone of the film.

Now that’s not to say Fantastic Beasts: The Secrets of Dumbledore does not have its problems. I wish the love and relationship between Grindelwald and Dumbledore were shown more rather than told. They interact twice and then watch the others’ reflections longingly. Yes, they both have good chemistry together but for a film that’s centered around Dumbledore’s romance with Grindelwald, you’d think they’d want to spend time letting the audience bask in the emotions of that love so the collapse is that much more meaningful and impactful.

This could have been a satisfying yet complex representation of an LGBTQ+ relationship that I feel could have been explored better. The next movie sets up that we will finally get the battle between the two that is supposed to be the greatest battle in the history of the wizarding world. I hope they focus on that. Newt Scamander and his crew have a finished story so I hope they are not back for the next movie. As much as I like those characters, they take away from the more interesting plot threads of Albus Dumbledore and Geralt Grindelwald.

Overall, I think this is a good comeback to the Fantastic Beasts Series. ‘Fantastic Beast: The Secrets of Dumbledore’ is an improvement from the previous film that utilizes its characters in an entertaining way. This universe has such a magical world with great characters that when it’s written right, is a good time. It is very dialogue-heavy at times so I can see the casual Harry Potter fan tuning out of the film but to the more seasoned fans of this series, I think they will really enjoy this latest installment of the series. I would definitely recommend checking this out!

Fantastic Beasts: The Secrets of Dumbledore is now playing in theaters.