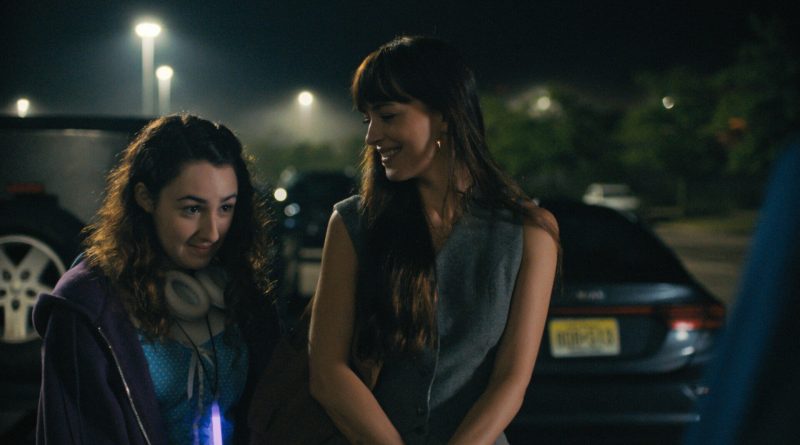 Going into this Rom-Com, my biggest gripe with it was the title. I had no desire to see a film called Cha Cha Real Smooth. If we’re talking party songs, I cannot place “Cha Cha Slide” in the Top 10… hell, Top 20 even. If they named this film “Yeah!” after the Usher smash-hit or maybe “The Way U Are” by Timbaland I’d dive into this movie so fast. But I can’t beef with the title, especially when the film turns out to be quite the charmer; Naturalistic performances that have a tasteful hallmark-y sprinkle to them, intelligent writing that subverts, and a hot dog stand called “Meat Sticks”.

At the typewriter, in the director’s chair, and in front of the camera you will find Cooper Raiff, a newcomer who made his feature debut, Shithouse, back in 2020. Raiff’s work on this film had the feel of a wide-eyed newcomer that’s brimming with creativity. His writing is tender, his direction is intimate, and his performance is absolutely arresting. The recognition of filmmaking “triple threats” is often exclusively afforded to the deeply established.

That’s not to diminish the accomplishments of Maggie Gyllenhaal and Bill Hader in the industry but it’s not uncommon for newcomers to backpack every aspect of the filmmaking process to get their name out. Raiff boasts this immensely intimate lens throughout the film that produces these alluring closeups and camera moments. It makes every moment feel candid without an overly shaky cam. Especially inside the party scenes, Raiff has the ability to capture what feels like sincere moments of fun and dancing. With Cha Cha Real Smooth, Raiff has unveiled a remarkable accomplishment.

What impressed me about this rom-com was its honesty towards love. It’s too often that modern romance stories will often seek to tell a heartwarming, yet narratively inflated tale of two individuals falling in love. There’s nothing wrong with these narrative guilty pleasures, that’s what makes the Rom-Com such a comforting viewing experience. With Cha Cha Real Smooth, the gratifying “will they/won’t they” don’t serve a predetermined fate for our protagonists. The back and forth is affected by real consequences and real moments of growth. And in the end, we are smacked with heartbreak but at the expense of a rewarding arc conclusion.

A cliche love story took the backseat as an enriching chronicle of maturity takes the wheel. Raiff plays Andrew who, even from a young age, has always chased girls that were too old for him. In a tender opening sequence, an early teenage Andrew excitedly tells his mother he’s fallen in love with a 20-something woman at a party. When he is politely rejected, Andrew experiences heartbreak. From the beginning, we see Andrew has been chasing this expected maturity that comes with relationships and he thinks he’s found it with Domino, played by Dakota Johnson.

After a few romantic moments together, Andrew gets entangled in the lives of Domino and her daughter Lola. Lola is splendidly portrayed by newcomer Vanessa Burghardt. Portrayals of our friends on the spectrum throughout filmic history have oftentimes been unrealistic or downright offensive. But in this new age of emerging representation, Burghardt is a shining light in this film. She traverses emotional weight with this naturalistic wit and innocence. Along with Burghardt’s, the performances and chemistry between actors are unreal.

Instead of our prime focus being on our two lovers, we are met with side stories that allow for other performers to shine. Not only that but they hold actual narrative weight. Andrew and Domino are constantly learning and constantly growing and that wouldn’t be possible without Leslie Mann’s “Andrew’s Mom” (IMDB credit), Evan Assante’s David, Raul Castillo’s Joseph, etc.

In a world where films like CODA have the ability to take the top Academy Award, I see a bright future for Cha Cha Real Smooth. In the same way, as its title song has, Cooper Raiff has created a crowd-pleasing romance that’s artistically inclined as much as it is gratifying. I am not admitting the Cha Cha Slide is artistically inclined, don’t misquote me. I am saying I cannot recommend this AppleTV+ release enough, it’s worth your eye-time.