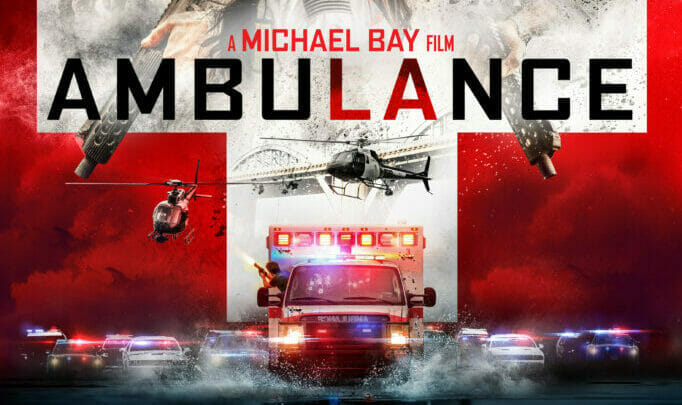 ‘Ambulance’ Review: BAYHEM TO THE FULLEST


Wholly injected with super adrenaline, Ambulance brings all of Michael Bay’s mayhem in a predictable fashion…spoilers ahead!

Michael Bay, Yahya Abdul-Mateen II, and Jake Gyllenhaal teamed up for ‘Ambulance’. An action-thriller film injected with super adrenaline and all the Bayhem to deliver jaw-dropping sequences. It is Michael Bay at his absolute best. Michael Bay pulls no punches and goes all out, all while delivering all the cliche Michael Bay story beats, but it’s an absolute treat to watch as all of the madness unfolds.

Based on Laurits Munch-Petersen’s 2005 Danish thriller of the same name, and script written by Chris Fedak. The events of the film unfold within a single day. Following military veteran Will Sharp (Yahya Abdul-Mateen II) a man in need of money in order to get the proper treatment for his sick wife Amy Sharp (Moses Ingram); as their medical insurance doesn’t cover the surgery needed to save her life.

Desperate to save the love of his life, Will Sharp lies to his wife and reaches out for help from his adoptive brother Danny Sharp (Jake Gyllenhaal). Will just wants a loan, but Danny offers him a huge share of money if Will helps him with pulling one of the biggest heists in LA History. Will agrees to help Danny with this bank heist but things take a turn for the worst when Will accidentally shoots a hostage.

With the arrival of the Special Investigation Section (SIS) of the LAPD, and a now injured hostage, Officer Zach (Jackson White). Danny and Will hijack an ambulance with EMT Cam Thompson (Eiza Gonzalez) on board. For the remainder of the film, Danny and Will try to find an exit strategy, while Zach is in the back on the brink of death with Cam operating on him and trying to keep him alive. Right from the start of the film and up until the film ends, everything in ‘Ambulance’ is wholly predictable.

For ‘Ambulance’ to work, the audience will just have to settle with the mindless madness that unfolds on the big screen. Audience members can see the ending of this film coming from a mile away. As Danny loses his control and becomes greedy, with constant threatening and belittling, absolute madness ensues.

The cops try to stop them and call in the snipers and the ambulance comes to a halting end. Danny threatens to kill all of them, however, he ends up getting shot by a sniper, ultimately saving Zach and leaving Will severely injured. Every story beat in ‘Ambulance’ has been done in many other heists films before.

However, what makes this film work is the sheer madness Michael Bay brings in with his style of directing. With the slow-motion gunshots, the thrilling car chases, and cars constantly getting rammed or run over, topped with a whole lot of explosions, it is once again Michael Bay being Michael Bay. Bay still delivers some astonishing wide and gorgeous-looking drone shots to leave a lasting impression.

‘Ambulance’ is one of those movies that doesn’t take itself seriously and delivers nonstop action, that certain audience members crave for. Jake Gyllenhaal is still one of the most underrated actors in Hollywood and for the role of Danny Sharp, he channels all of this crazy energy that most fans probably wouldn’t have expected from him. Eiza Gonzalez does her best with what she is given, and that’s all we can ever really say about any role Eiza tackles. Yahya Abdul-Mateen II delivers and fully encapsulates the role of a veteran trying to do something right in a system that’s failed him.

The film has its fair share of flaws and runs longer than it should have. The sound mixing, special effects, and stunt work are the film’s biggest strengths alongside its leading actors; and the film plays well into all of that. By the end of it, however, audience members may feel a bit exhausted from it. Negatives aside, this is still one of Michael Bay’s best works in quite some time.