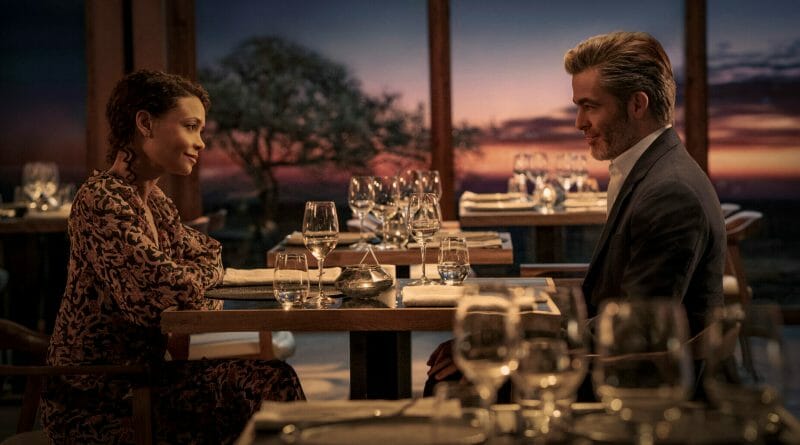 
All The Old Knives Grade A script in the hands of a cast of dramatic heavy hitters filling their perspective spaces with performances that make it clear why they are the go-to for these spy or dramatic projects.

In a world that is seemingly dominated by tentpole cinematic universes, massively expensive set pieces, and nostalgia-inducing reboots, prequels, or requels, it’s easy to get lost and forget that a good story in the hands of a great cast and director can still shine. All the Old Knives is just that.

Directed by Janus Metz, with the screenplay by Olen Steinhauer, All The Old Knives Grade A script in the hands of a cast of dramatic heavy hitters consisting of Chris Pine, Thandiwe Newton, Laurence Fishburne, and Jonathan Pryce filling their perspective spaces, however briefly (Fishburne and Pryce might have a combined 25 mins of screen time) with performances that make it clear why they are the go-to for these spy or dramatic projects.

All The Old Knives spins the tale of Henry Pelham, a veteran CIA agent, who is given the task of rooting out a potential mole whose treasonous actions led to the death of 120 hostages and their captors which haunts all Involved, 8 years later. One of the most important aspects of screenwriting, something I teach my students, is the importance of the first 10 pages. It’s all most producers, studios and contests tend to read.

The first 10 have to immediately grab your reader or viewer, never letting them go or giving them a chance to. This is especially important for projects that are heavy on dialogue and light on the action that is usually associated with many recent spy/thriller offerings. Olen Steinhauer has mastered this, with his usual slow-burn style closely resembling the novels that made him very popular. A burn that leads you into several spy movie tropes we have come to know, love, and be annoyed by only for those to get turned on their heads, making you question the answers you assumed would happen mid-way through.

All The Old Knives is both contained in locations but epic in ramifications forcing the actors to make clear distinctions between pre-terrorist attack personas and 8 years later, all the while giving the audience red herrings that make this so much fun to watch. Fishburne and Pryce do what they do and do it well. Thandiwe Newton does a fantastic job as Celia Harrison, whose job is to seemingly be the human embodiment of the aforementioned Red Herring.

Dutiful spy, lover and potential villain, Newton’s performance sucked the air out of the room, often dominating all in her presence and pushing Chris Pine into a range I didn’t really think he was capable of. Chris Pines’ performance and wig in a series of expositional flashbacks, were strangely uneven and stale in the beginning and throughout parts of the movie. It was jarring enough to make me think I missed something at the beginning of the movie and had to start it all over.

However, Chris Pine began to shine opposite Newton culminating in what is easily the best performance of his career. Directed superbly by Janus Metz Pedersen, this “Bond Lite” plot premise, without all the swag and cool toys, shines brightly as a testament that a spy thriller doesn’t need to have car chases, explosions, and Mission Impossible level CGI, to be good or in this case, great.

All the Old Knives releases in select theaters and Prime Video on April 8th.