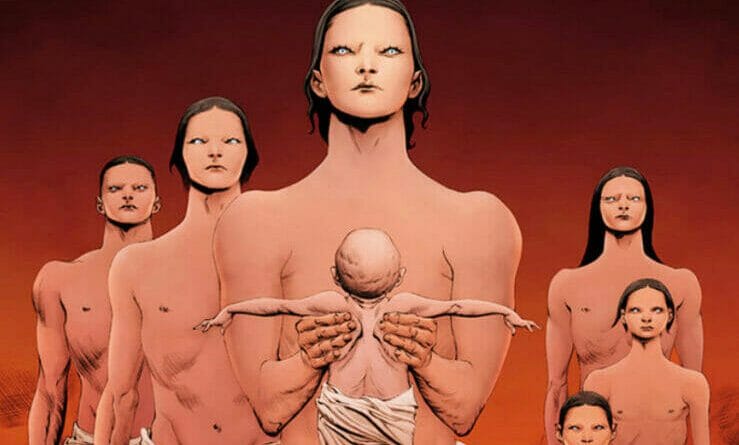 
Seven Sons is an Image Comics release written by Jae Lee and illustrated by Robert Windom, with colors by Kelvin Mao. From the outset, you can tell Jae Lee has done his homework in ensuring his religious knowledge is informed and poignant. This comic run will tell the story of something religions have talked about for a thousand years—the second coming of Jesus—just with a little twist.

The comic begins in New Canaan, Nevada, (formerly Las Vegas). If you’re a player of the Fallout games, you would know that New Canaan is a city in Utah mostly inhabited by Mormons. Whether this is a callback to that fact or will play into the story is yet to be known; however, Utah is directly named at one point in the story. One million people are waiting in a new stadium for the birthday of the second son of God.

An unnamed man awakes in a backstreet alley in the darkness. He is pale, has long hair, and appears very glazed over. As he stumbles through the New Canaan streets, he appears homeless and is treated as such with either assistance or violence, which is a pointed look at how society actually treats its homeless population. We then spend most of the remaining issue within several flashbacks.

These flashbacks inform us about the current state of affairs. In 1977, the prophet, Nicolaus, predicted seven identical sons would be born to seven virgin mothers on each of the seven continents. And he was correct. The seven sons, known as the Jesi (I assume plural of Jesus), are then paraded around Earth as rockstars as the New Church of the Seven, complete with action figures and merchandise littered across television.

Now, after successful assassination attempts over the last 21 years from a terrorist group known as Allah’s Watchmen, only one of the seven lives: Lord Pergi. This son has been lauded as the true son of God. That is, I assume until they realize the man from the alleyway has also risen. This comic is an interesting take on the Second Coming of Christ predicted in Christian and Islamic religions. Jae Lee has created a world not dissimilar to ours where, instead of actors or musicians, we see religious figures turned into celebrities, and money is thrown into the wind for new stadiums and merchandise.

I liked this aspect of social commentary along with the violent reactions of some against the so-called sons of God. Art is such a perfect piece to emulate life and Seven Sons does just that. The artwork by Windom was unique. Each of the backdrops and settings was so delicately detailed that you felt the griminess of the streets and the extreme pulsating neon advertisement signs. One of the most disturbing aspects is the caricatures of the Jesi.

Their faces produce an almost uncanny valley effect and—although I know it’s purposeful to distinguish them from regular ungodly humans—I wonder if this will be addressed. I particularly enjoyed the jagged panels as they emulate the erratic nature of people’s emotions. The cover also showcases the grisly image of a newborn child heralded by his brothers, which is unnerving and serves as a great entry point into the world. Like I said earlier, a fascinating beginning to a unique tale.