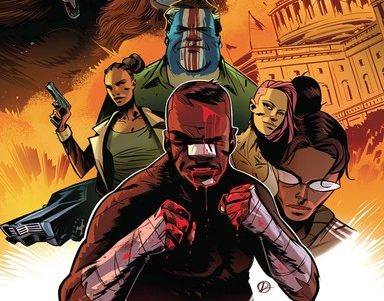 I’ve been holding onto this review for quite a while. I wanted to read this story over a couple of times before I actually sat down to review and give my two cents. I want to keep this as spoiler-free as possible because I really want comic book fans to really check this comic book out. But just a forewarning. You might come across some spoilers. You’ve been warned.

Written by Eisner-nominee Chuck Brown (Bitter Root) with artwork by Italian artist Prenzy, On The Stump through and through is a really violent and bloody comic book and I personally loved it for those exact reasons! It has this real Fight Club vibe to it and as a fan of Fight Club and hand to hand combat in general, that really drew me to this comic book and it made it a real pleasure to read a couple of times. And the artwork by Prenzy just elevates the hyper-stylized, ultra-violent piece of work that this comic is presented to be.

In the world of On The Stump, elections are decided by hand to hand combat in arenas called Stumps. As you start reading you are immediately immersed in a bloody fight between the Senator of South Carolina, Jack Hammer and the Senator of California, Sweet Smell Shaw. In a brutal battle to decide whether or not a bill to deregulate gene splicing will pass. The fight is brutal, violent, bloody and amazingly stylized throughout.

But On The Stump is not just about political elections being decided by hand to hand combat, there’s so much more. Like political corruption and abuse of the press, political figures trying to take away the press’ freedom of speech because they are receiving bad press and they want to nip it in the bud before it gets too out of control. Despite these political figures having a crappy reputation as it is. And that comes in the form of a character named Thunder Bearer. I won’t give too much away, as I mentioned above. I really want my readers to go out and support this book. Buy it and read it.

There’s another layer of this story that’s touched but not expanded on just yet, and that justice. We are introduced to an FBI Agent by the name of Anna Bell Lister. Who seeks out Jack Hammer in order to team up to bring down Thunder Bearer. As I also mentioned above, there are some political figures willing to do anything to make sure situations are handled before they get out of hand and Thunder Bearer is not afraid to get his hands dirty.

That being said, I really want our readers to go check out this book and support it. Great action, exceptional artwork, great pacing and of course all the blood and violence you want in a comic book. It’s a great read and I’m more than sure that Chuck Brown will continue to deliver as the series goes on.

On The Stump #1 is available now at our local comic book shop.

On The Stump #1 Review

If you enjoy hyper-violence, hyper-stylized artwork in a story about political corruption in a Fight Club setting than this series is for you!

Osvaldo MaderaFebruary 19, 2020If you enjoy hyper-violence, hyper-stylized artwork in a story about political corruption in a Fight Club setting than this series is for you!9.0110
Your RatingUser Rating: 0 ( 0 Votes )
Share

WOLVERINE #1 - The Best there is Unleashed! (REVIEW) Next post