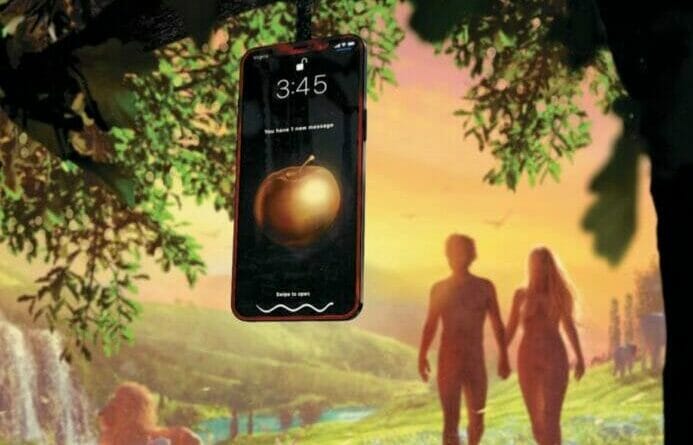 
AWA Upshot’s NewThink. Be afraid, dear reader, as the victim in this tale is you.

NewThink is AWA Upshot’s newest addition helmed by international best-selling and award-winning writer, Gregg Hurwitz. The anthology series aims to examine the cultural and political landscapes of modern society. Issue 1 focuses on our daily involvement with screens with art by Mike Deodato Jr.  Immediately, you get Black Mirror vibes but this doesn’t evolve into a blood bath or random crazy scenarios involving Prime Ministers and pigs, it takes us exactly to where we are. The horrific endgame of this science fiction tale lies in reality. Told using simple narration captions to sequentially retell events, NewThink 1 is a quick read. But make no mistake, reading this is jarring.

NewThink Issue 1 jumps into the world of computers and phones, and how they have become a part of our lives; a dark reflection of technology in current society. Cleverly naming the machine-based alien race “Skreens”, Hurwitz describes how they planned a takeover. They infiltrated human society, also known as natives, decades ago and evolved in order to make slaves out of humans. Starting as work things, developing ritual objects (printers and keyboards), moving into living spaces, with humans then moving away from working in fields and spending their entire lives with a screen nearby.

The most poignant page for me was the one with a baby in a crib. The scene is a backdrop for the narration detailing the fact the slaves gauge their worth by likes online rather than those right in front of them. Sadly, this is not science fiction. Instagram and other socials try to take away the like or dislike counter but it still exists, it is the currency of our online selves. But, the ironic thing is, even as I read it, I was self-aware of the slavery I have fallen into.

I read it on a screen, I’m writing this on a screen, and you are too. It’s one of those things that make you want to step back, touch the grass, throw your phone in the ocean and never look at it again, but the skreens wouldn’t want that. It is so hard, society has evolved much like Hurwitz describes: the screens hurt our eyes so we invent blue light glasses, our necks hurt from craning so we go to massage parlors. We aren’t curbing our habits away, we are creating habits to curb the technology.

The art is, as I have come to expect from Deodato, absolutely spectacular. A phone dangles in the Garden of Eden as Adam and Eve head to pick the Forbidden Fruit, which is such a masterful metaphor on the cover by Rahzzah. Human emotion, or lack thereof, is evident with clean line work. Deodato also uses a varying degree of thickness of gutters and inset panels, showcasing the passage of time or the importance of events. Detail and lighting are added by the colorist Lee Loughridge, in a vivid way showcasing the significance of the skreens in the comic’s world and ours.

In all honesty, this is a must-read for people of today. The horrors of a malignant alien invasion aren’t in our movies or our minds, it’s on our workstations and in our pockets. But it raises a question that will just be pushed aside once the next notification arrives: how do we fix it? Each story in the 5-issue anthology will consist of unique characters and independent storylines that highlight social commentary. Each issue will be released monthly with a different artist, solidifying as an anthology more so—something I think is pretty clever.