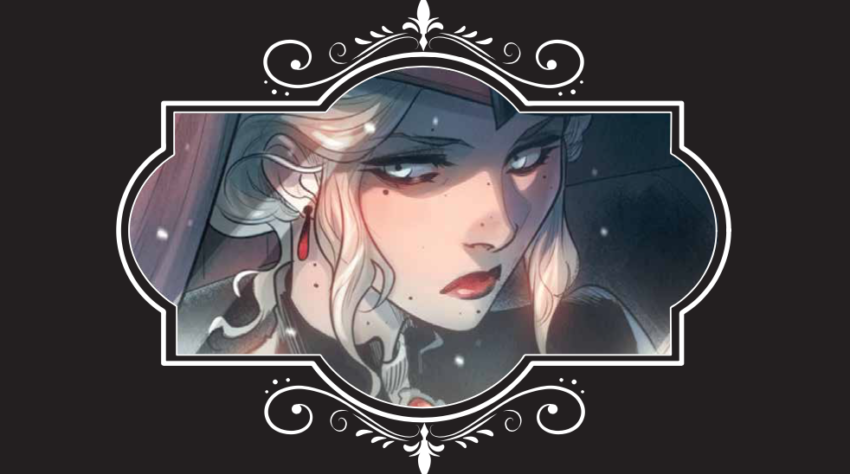 Mirka Andolfo’s new goth-inspired Victorian monster series Mercy has finally arrived and with much anticipation. Mercy explores the topics of otherness, damnation, and redemption. The issue begins with a horrific mining incident that leaves nearly everyone involved dead with the exception of Lady Swanson, who is now a widowed single mother of three.

Unfortunately for Lady Swanson, she is looked at as a killer and the one responsible for the deaths that occurred during the mining incident. While this issue only shows the end of the incident and the aftermath of that incident, we don’t really know what happened in that mine other than that these individuals were attacked by something or someone and eventually killed.

This first issue of Mercy is not just a world of death, monsters and the supernatural. That extra layer of emotional storytelling comes in the form of Rory. A young girl who’s in the care of her “uncle” but is essentially alone in the world because she has no parents. Of course, we get that with Lady Swanson but it really resonates tenfold with Rory’s character. I really found myself holding back a few tears after her encounter with her “uncle”.

Clearly shes afraid of him as she mentions to Betsy and her brother but once we see that encounter first hand, she really undersold it. All credit goes to Mirka of course and her writing in those specific moments; and the way she illustrates this encounter really drives the point home. I found myself really feeling for Rory and what she’s been dealing with despite only catching a glimpse of it.

There’s one specific line that he says to Rory as he’s disciplining her and I couldn’t help to say to myself “you f**** piece of s***!”, that’s just good writing and that’s all it really boils down to.

But being able to convey such emotion with an X amount of panels and illustrations just speaks volumes about Mirka’s talents as a writer and as an illustrator. I don’t often get too emotional or rather find myself holding back any sense of emotion while reading a comic book but this specific moment in this issue really got to me and I loved it. Despite how bad I felt for poor little Rory.

The big mystery with Rory is her mother. Who she clearly holds near and dear despite not ever meeting her. She knows about her and has been told that she is a very beautiful blonde woman who looks like an angel. But she has never met her. Backtracking a bit back to the beginning of the issue, she mentions that this new angel statue that everyone has gathered around looks like her mother.

Now insert Lady Hellaine, not much is known about this mystery woman but she’s definitely more than meets the eye. She is heavily shrouded in mystery. She is serious and comes off very intimidating but alluring part of her mystique is that she resembles someone who’s been hinted at throughout the entirety of this first issue and that’s Rory’s mother.

That’s not saying that she IS Rory’s mother but I personally think the possibility is there. There’s just an uncanny resemblance. Beautiful face, blonde hair, the face of an angel. Add in the one transition panel where Mirka wants you to believe that Hellaine is Rory’s mother. You’re going to have readers like me harping on this specific plot point and I cannot wait to see it all unravel.

Like who is Lady Hellaine? What does she want? Why did she do that one thing to that poor boy after asking that somewhat sentimental question? What’s her deal you know? I have so many questions!

I wanted to keep spoilers at a bare minimum because I really want comic book readers to go out and purchase this book and read it. I think Image Comics has another hit on their hands and Mirk Andolfo has truly displayed that she is indeed a triple threat.

She truly knows how to fully immerse you into the world of the story that she is telling and her artwork adds all the extra nuances you need to bring forth something so interesting and compelling. To the point where you would rather stay in this world to see what’s coming next, instead of having to switch back to reality to wait another month to revisit this world again. I couldn’t have asked for a better debut issue. It truly exceeded my expectations.