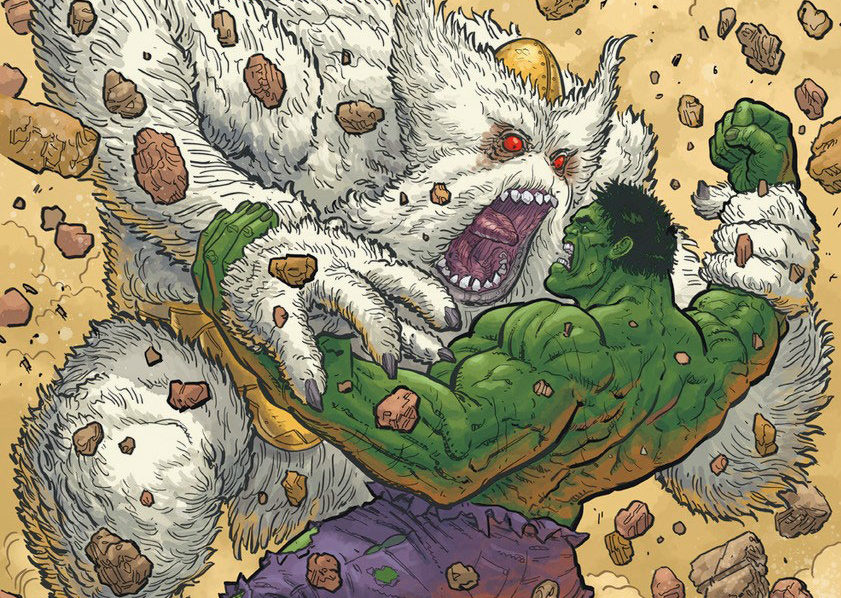 HULK AND XEMNU DUKE IT OUT ON STEVE SKROCE’S IMMORTAL HULK #750 COVER!

Since launching THE IMMORTAL HULK back in 2018, the mastermind creative team of Al Ewing and Joe Bennett have brought Marvel’s iconic character to shocking and thought-provoking new heights. Issue after issue of this action-packed series has both delighted and stunned readers, making it one of today’s most critically acclaimed books. And the frightful fun is just getting started.

IMMORTAL HULK #33, the Hulk’s landmark 750th issue, will be an extra-sized special full of the mind-blowing storytelling that fans have grown to expect from this hit series. Featuring a sequence drawn by superstar artist Nick Pitarra (The Manhattan Projects), THE IMMORTAL HULK by Al Ewing and Joe Bennett will continue to redefine Bruce Banner’s journey as he trades blows with Xemnu and the Hulk’s longstanding feud with Roxxon Energy comes to a head.

Check out the explosive variant cover by Steve Skroce and colorist Dave Stewart above and behold a first look at the interior action from Bennett, inker Ruy Jose, and colorist Paul Mounts with these two double-page spreads that connect to form one massive scene!

READ: RED HULK TO MAKE HIS MCU DEBUT IN SHE-HULK