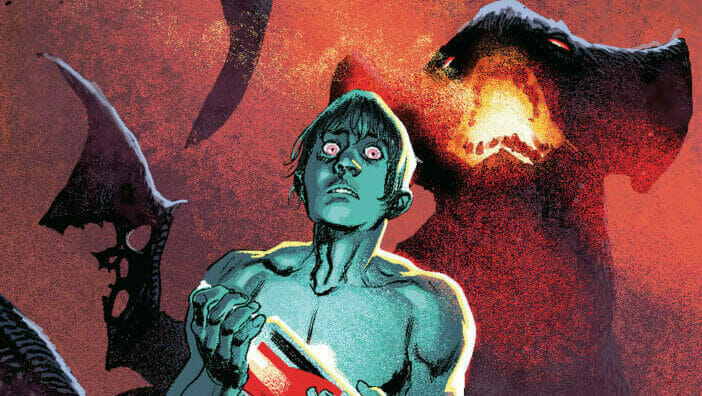 
This House of Slaughter addition adds a deliciously horrific atmosphere that is hindered by its slow pacing.

This issue of House of Slaughter continues as Edwin’s search for a legendary monster goes horribly amiss. Adrift on Lake Michigan, can Edwin survive with only the torn pages of his journal as makeshift S.O.S. notes? And what memories of his past cases will surface as he clings to life? Edwin Slaughter is on the boat feeling comfortable about his future demise on the lake to his monster Hades, amazement. He says he doubts anything will manifest for another week so the campers will be fine.

The House of Slaughter can send someone more competent after him. This unsettles Hades because most humans would not fear the anxiety of their job before their death. This gives him an idea. I like how Hades’s personality differs from Edwin’s here. He figures out that Monstrum is different from humans. They have no depth. No capacity for emotion. Monsters feed on fear so they have no type of bias. They will track their prey, scare it, and devour it until more prey comes. In the lake, prey would not be guaranteed for this monster though. He notices that they are trapped in a slow current so something large must be the source.

So it would need a lot of nutrients without very much prey. He then starts to dump all the food on the boat in the water. He asks if Hermes is scared because if he is the monster will find them more appetizing. Edwin doesn’t fear death so he can’t be the main course. He’s not tasty enough. He dumps the water supply as well. He says while he doesn’t fear death he thinks starvation would be,” remarkably unpleasant”.  He thinks maybe this emotion might entice the monster to eat him.

He very impressively figures out that the monster they are hunting must feed off situational emotion. How maybe monsters should be classified on the phobias they like to consume from their prey. We then get shown a flashback that is a little confusing but visually creative. It shows a young boy of four with his mother at a public pool. The monster emerges, grabs the boy, and pulls him under. He was going to devour the boy until the mother jumped in to save her child. The monster should have killed them as well as eaten them both but it hesitates.

They both are drowning but still, the monster makes no move. They both get pulled out of the water. We then see them both home. The mother collapses with her boy standing over her. The boy is Edwin. He is alarmed when he can’t remember what happened after. I am confused about why the mother collapsed, assumed to be dead, or why the monster let them go free if their only instinct is to consume. I will admit the cliffhanger does make me want to check out the next issue

The art in this issue by Letizia Cadonici is the highlight for me. The art is unique looking when it comes to its characters. The art also helps set up the creepy atmosphere this issue is trying to portray perfectly. The use of colors in this issue is neat as well. The backstory was all read and portrayed through Edwin’s illustrations. They use harsh colors in dark scenes that really make the panel stand out. The settings are simple but colored nicely so you are never confused about what is happening. I also liked their creature designs; Monsters are a big thing in this story so unique creature design is important for this horror genre type of series.

As for the writing by James Tynion IV, I think he did a good enough job. I’m not going to lie, it’s a little slow-paced. Maybe this new character introduced just doesn’t grab my attention yet. But I feel like he’s lacking a little bit in the personality department. He’s smart and I am intrigued by the cliffhanger to learn more about his past. As of right now though Edwin doesn’t have the charisma or the skills seen to make him stand out.

Hopefully this changes in later issues. I caught myself liking his monster/ paintbrush Hades more than I did Edwin himself which is a problem. I do like world-building in this issue. We learn more about how the monsters hunt. What they are after to gain their next meal. How they might be more complex than people thought with preferences on what they want to consume. The cliffhanger itself did capture my interest again so I will be checking the next issue out of House of Slaughter.

House of Slaughter #8 is available now.