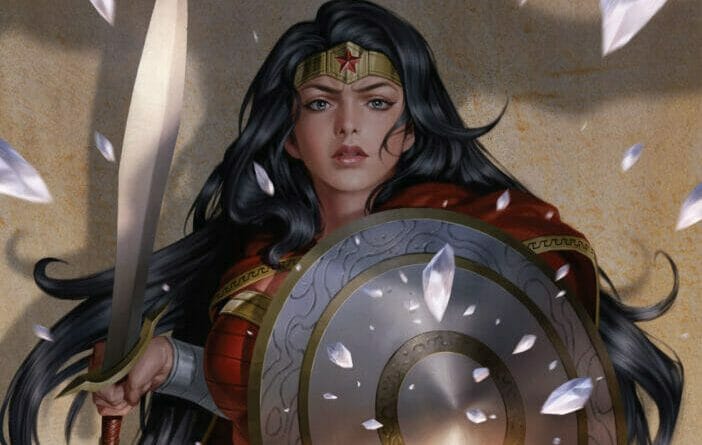 DC Comics is a little light this week with their releases but there are some interesting titles you may want to pick up. As mentioned above, DC vs Vampires takes a big bite of the spotlight this week with its sixth issue. Wonder Woman gets a sensational special issue with Sensational Wonder Woman Special #1, and the War for Earth-3 continues with its second issue. As per, let us know which issue you are looking forward to the most this week.

After the shocking revelation at the end of last issue, will the new Aquamen partnership be over before it even begins?! With more Atlantean sleepers awaking, the team races to discover what Orm’s role is in the situation…and how long has he been involved?!

Batman Beyond: The White Knight (Book One)

A lot can change in 10 years, especially in Gotham! Batman, a.k.a. Bruce Wayne, may be behind bars, but the real criminals are still out there. Gotham Motors CEO Derek Powers has seized control of the Wayne family’s assets and is using them to transform the GTO and the city they’ve sworn to protect. Crime is down, but at what cost?

A new Batman has emerged in Powers’s city, and only Bruce is fully aware of the dangers to come. It’s time to destroy the mantle for good, but he’ll need one of his forgotten sons’ help to do so. Enter Jason Todd…the first Robin?!

In this thrilling sequel to the blockbuster comic book hits Batman: White Knight and Batman: Curse of the White Knight, writer/artist Sean Murphy invites the audience to go beyond the Gotham they know to discover an engrossing new take on the city and its heroes. Welcome to Neo-Gotham and the world of Beyond the White Knight!

With the power out across Gotham, Batman must haul the not-particularly-cooperative villain responsible, E.M.P., across miles of chaotic city streets, filled with terrified people and opportunistic criminals! Blackgate Prison can nullify E.M.P.’s destructive electrical powers, if Batman can survive long enough to get them there-but what happens if there are two people loose in Gotham with those powers? What then? The mega-talented Jock (Batman: The Black Mirror, The Batman Who Laughs) writes and draws the blockbuster story of Batman’s worst night!

Batman gets the upper hand on the vampires who have infiltrated the Justice League…but the Vampire King finally reveals himself, and it will be the most jaw-dropping moment of 2022! The shocking, bestselling series reaches its blood-drenched halfway point!

Wonder Woman stars in three sensational stories that will push her to her limits. Will the Amazon Princess come out on top after battling the likes of Circe, Blue Snowman, and the Threnn of Doom? Join us in this celebration of all things Wonder Woman for International Women’s Day!

When Deathstroke assassinates Ra’s al Ghul, Talia al Ghul demands revenge and sends her League of Shadows to kill Deathstroke and Deathstroke Inc.! Batman and Robin must team up to track down Deathstroke and bring him to justice…but do they? Expect over-the-top fights, action, mystery, and betrayal as this crossover event creates a major impact on the DCU! The action continues in April with Batman #122!

By popular demand, the Swamp Thing has returned and is extending his roots into Season Two! The climactic battle between Levi and his brother Jacob led to events that left the Swamp Thing broken up—literally. Now, with Levi fractured and on the edge of oblivion, an unlikely ally has entered the fray to piece him back together again: Tefe Holland, daughter of the original Swamp Thing.

The War for Earth-3 comes to a close as the Crime Syndicate, Teen Titans, the Flash, and Suicide Squad all battle in one final conflict that decides who lives, who dies, who makes it back home, and who’s left stranded on Earth-3.

With the Justice Squad’s plan to take over the alternate Earth and claim it as their own, the heroes of the Teen Titans and conscripted members of Rick Flag’s Suicide Squad must finally work together…but have they waited too long to stop Amanda Waller?