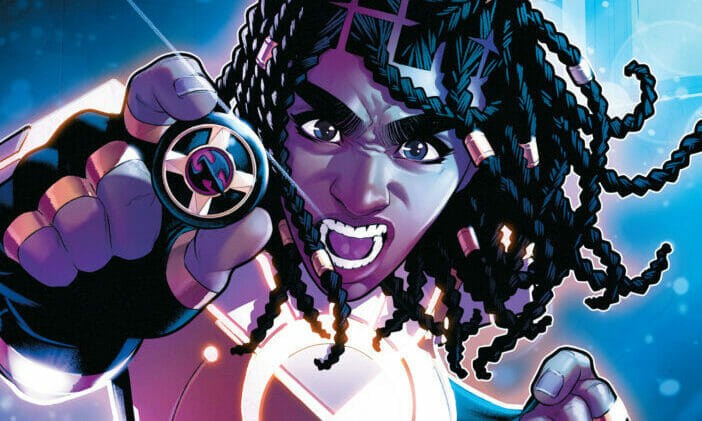 DC Comics is coming in hot this week with the highly-anticipated first issue of The Sandman Universe: Nightmare Country, Naomi Season Two #2, and Flashpoint Beyond. We got previews for every single issue releasing this coming week, check them out below and let us know which issue you are looking forward to the most.

The Batgirls and Tutor face off again, but this time at the creepy, abandoned Arkham Asylum! Can the Batgirls stop Tutor from using his art to put all of Gotham in a mind-controlled trance? Let’s hope the Batgirls found a way to avoid being put under his control…again! Meanwhile, Babs’s hands are tied—literally—when she comes face to face with Spellbinder.

Harvey Dent enacts his plans for Gotham! He’ll overthrow The Batman and assume his rightful place as its guardian. As Batman works to stop his friend Harvey, he finds himself vastly outnumbered by the forces at Harvey’s disposal. He’ll need to turn to some unlikely allies if he’s going to turn the tide in his favor to protect his city and save his friend!

After barely escaping with one of her nine lives, Selina arrives at a crossroads. She can either continue on the path of a criminal or take a chance at being a hero like Batman. There’s just one thing she has to do: make a vow to never kill The Joker. But what could lead her to break that sacred promise years later? Find out in the penultimate issue of this critically acclaimed maxiseries!

Batman and Zatanna are at the mercy of the DCU’s newest magic! Ace the Bat-Hound and the Super-Pets versus Gotham’s worst villains! A new Birds of Prey led by Lady Shiva and Katana? And a team-up between Batman and the Question!

After sacrificing everything to help The Flash put the universe back together and save Bruce Wayne’s life, Thomas Wayne wakes up in a world he thought was no more. Forced to don the cowl once again, Batman prowls the streets of Gotham City searching for answers to how this world still exists, but what he starts to uncover will send him hurtling around the globe. The hunt for the Clockwork Killer starts here!

FINAL SHOWDOWN WITH THE NEXT JOKER! Peacekeeper Red, a.k.a. Jason Todd, and the Next Batman take on the Next Joker, but will their combined abilities be enough? Meanwhile, Hunter Panic and Harley Quinn try to keep Tobias Whale alive against a whole army of Jokerized robots! Plus, Nightwing becomes something…new?

NOVA LUX
As the dust settles after the battle with the Anti-Guardian, John Stewart, Jo Mullein, and the rest of the Corps pick up the pieces and adjust to their new status quo. The day might be saved, but there’s still plenty of work to be done. Everything you know about Green Lanterns is about to change!

The campaign of terror continues as a mysterious serial killer brutally murders New York City Police Commissioner Becket, in the process exposing ugly truths about how Becket ran his department. Batman finds himself caught between a police department hit squad that wants to execute the killer and a populace that’s beginning to see them as more of a folk hero than Batman himself.

Naomi’s friend and mentor Dee is missing, and she’s determined to figure out what happened to him. But in her search for the missing Thanagarian warrior, Naomi uncovers shocking truths that will forever change her life. As if it hasn’t already changed enough! Guest-starring Hawkgirl of the Justice League! Soon to be a CW television show from Ava DuVernay!

The inmates who volunteered for the Blaze program are discovering fascinating things about their newfound powers—and about the best ways to torment their Suicide Squad watchdogs. Are they discovering anything about their core mission of stopping the cannibalistic metahuman who’s terrorizing the planet and who, uh…might have just defeated Superman…? Well, slightly less so. But they’re all going to be dead in three months. Or a lot less. Let them have fun, eh?

Henry Bendix’s plans are now clear. Gamorra’s president won’t stop until he has total control. He’s now sold his strategy to other dangerous regimes. Only Superman and his allies stand in the way of Bendix’s dark vision for the world…a world where superheroes are put in their place, discredited, and even destroyed. A world where heroes are replaced by agents of those ruthless enough to have seized power. The Rising has begun!

Sometimes, nightmares walk the Earth. Every night when you sleep, the Lord of Dreams chooses the path you’ll follow…into a sylvan Elysium, or down the hallways of your darkest fears. And sometimes, if it is Dream’s will, those nightmares escape those halls and go out into the world. But it is not a choice he makes lightly.

Today the Corinthian walks the Earth again. The most feared of all Dream’s nightmares, his ravenous mouths have made him a legend among serial killers. Letting the Corinthian out among mortals is the most dangerous thing Dream could possibly do. But he has no choice—because there is another nightmare walking the Earth, one that must be hunted…and this monster is one that Dream, lord of all nightmares, did not make.

Trial of the Amazons part five!

Tensions rise as the tribes compete with one another to determine the future of the Amazons. But a lot more than just glory is on the line—immortality is too! Little do they know, someone is pulling everyone’s strings from behind Doom’s Doorway. Who could it be? Find out in this jam-packed issue!