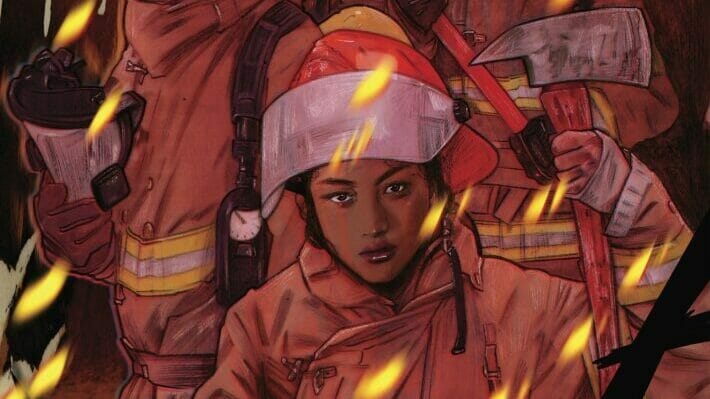 During their sentence at a women’s prison, four fearless inmates have taken up the intense job of firefighting under their captain, Ruby. When opportunity strikes during an intense forest fire, this crew of badass women make a decision to seize it, together. Will this crew of daring female firefighters walk away with ruby-lined pockets or burn up in flames?

“I hope [readers] gain an appreciation for the real people that spend time in this real-life Dark Space. Inmate firefighters are out there doing incredible work helping keep wildfires at bay as best they can, and I didn’t have any idea that was the case until Scott brought this story to me,” artist Hayden Sherman told Newsarama. “I’ve learned a lot about it all since then and I hope readers will be moved to learn more as well. And to any wildfire firefighters who may read it, I hope I’ll have done a worthy job of depicting your day-to-day!”

The five-part series features an all-female cast and is set six weeks into the historic Arroyo fire in California, as it’s being fought by a crew of women inmates from a local prison. The newest recruit, who’s serving time for white-collar crime, convinces the rest of the squad to raid a former associate’s nearby abandoned mansion for cash and pawnable items. Each character is then faced with a moral dilemma: stay the course or risk everything.

Dark Spaces: Wildfire will be published monthly from July through November, with the first issue available in multiple cover variants for retailers and fans to enjoy, featuring artwork by Hayden Sherman, Andrea Sorrentino, Liana Kangas, and Tula Lotay.