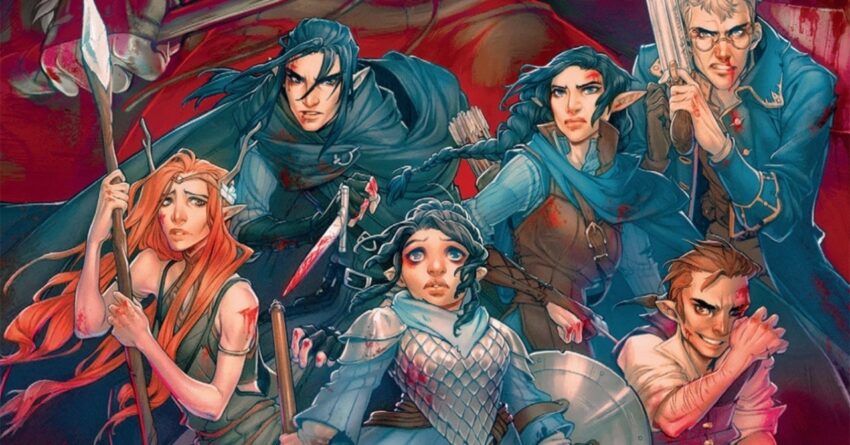 For every good adventurer, there is a great adventuring party behind them. In this ultimate issue of Critical Role Vox Machina Origins II, the legendary party finally comes together for the first time.

In this final issue of the 6-part saga, Vox Machina has finally gathered the spell components to save Grog from being possessed by the lich Drath Mephrun, along with a new party member in Percival “Percy” Fredrickstein von Musel Klossowski de Rolo III. Despite these new additions, they are running out of time, with Drath taking more control of Grog with every passing second. Will their efforts be enough or is it already too late?

Now that all seven of the mainstays in Critical Role Vox Machina have come together, this issue allows readers to finally see the full-fledged group in action. The dynamics between each character are quickly established, thanks to both Judy Houser’s script and Olivia Samson’s script. Percy meshes well with his new companions and even gets to share a witty line or two. The comedy on all fronts remains well-crafted, with every character being able to get a laugh out of me, particularly Scanlan and Grog.

That is not to say the comic is all laughs. It is also filled with ramping tension, keeping you on the edge of your seat regardless of whether or not one is aware of the original source material. Accompanied by foreboding visuals in both outdoor and indoor settings, you can feel time running out just as much as Vox Machina can, making it all the more engaging, especially when their final task arrives. You root for them through all of the difficulties they face, and come out satisfied with the results.

On top of wrapping up this series run on a satisfying note, it also does a good job of setting up the next adventure for our heroes. Vox Machina Origins Series III is confirmed at the end of the issue, and enough details are given to leave readers wanting more. The group has officially come together, and one cannot help but look forward to what their first adventure as a team will be.

Vox Machina Origins Series II #6 ends this current arc on a high note, creating a tension-filled finale with the perfect amount of levity in order to show how powerful the group can actually be. Time will tell what kind of antics Vox Machina will get into next, but readers can rest easy knowing that more stories about the beginnings of the group will come into fruition soon.

For more reviews of comics and future Critical Role projects, make sure to keep it locked here at The Nerdy Basement. Feel free to consider supporting us on Patreon as well. It’s a simple way of supporting us so we can keep on providing you with your Nerdy News!

Ending on a satisfying note, Vox Machina Origins Series II #6 finally shows how powerful the group can be when brought together and properly foreshadows what is to come.

Aaron AcevedoJune 10, 2020Ending on a satisfying note, Vox Machina Origins Series II #6 finally shows how powerful the group can be when brought together and properly foreshadows what is to come.9.0110
Your RatingUser Rating: 0 ( 0 Votes )
Share

From “Their Dark Designs” to “The Joker War,” Jorge Jiménez’s Character Designs Showcase the Cast of Batman with New Faces and Old Friends Next post