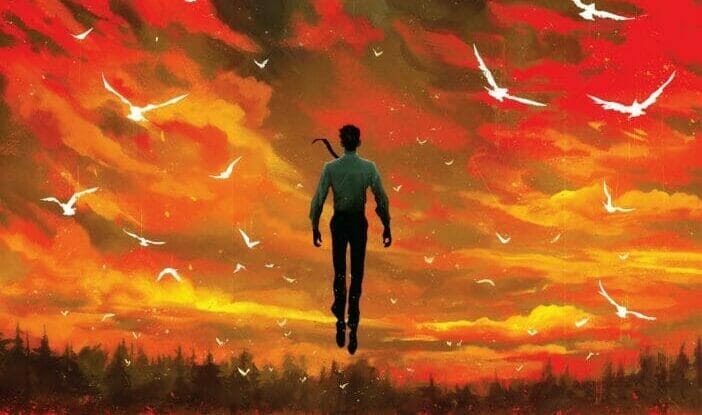 
A solid first issue with beautiful imagery and an intriguing mystery

Behold, Behemoth, written by Tate Brombal with art by Nick Robles. My favorite part of reading this first issue was Nick Robles’s illustrations. His use of color in his background/scenery is amazing. The lighting in every scene is beautifully done. It really portrayed the dream-like atmosphere that the protagonist was going through. He uses the color red for dystopian /apocalyptic visions the main character is having which makes a panel really stand out. I also enjoyed his attention to detail. His character designs are also unique. They are all very expressive and you can see the emotion during dramatic moments.

In this first issue, we meet Greyson, who is attending his brother’s funeral after his sudden and mysterious death. We get to see a flashback of him and his brother Liam as children. His older brother always played the role of Greyson’s protector from their violent household. This gives the readers insight into how this death would affect our main character and sheds a sympathetic light on him. This flashback gets interrupted by a vision of a destitute world.

Each scene is portrayed by Nick Robles predominantly in a variety of black and red. Greyson snaps back to reality only to find everybody has left but his official police liaison, Kavita. Seeing, that he’s under a lot of stress, she advises him that he should take it easy but he refuses.

We learn while on the phone with his pharmacy, walking to his next case’s house that he’s on medication. How recently he’s been experiencing migraines, nightmares, and loss of time. I really like the characterization of Greyson. He’s a gentle type of man who has a hard past and thinks he’s having psychotic episodes because he loses time throughout the comic. When he shows up to the family he’s checking on because he’s a social worker, a man with a cross painted on his head lets him in. He and all his children oddly wear these crosses, another mystery about the world surrounding these characters. I hope the world-building in this series expands in the future because there are oddities to some of these characters.

Greyson tells him someone has filed an inquiry against his family and how his kids have reportedly been missing a lot of school. We get introduced to a girl named Wren. A little girl who is getting abused in this home, sporting a huge black eye on her face. This sends Greyson into a rage all turned to the only culprit, her father. The father himself makes a pitiful excuse that she fell off her bike to no avail. Enraged, he walks back to the father, his consciousness flickering to that red dystopia showing a figure with glowing eyes.

The thing raises his arm to strike but suddenly Greyson wakes up in the bath. I understand why he would be alarmed from losing time because he had such violent thoughts earlier so to suddenly wake up in his home must be jarring. He is interrupted when his coworker Kavita, knocks on his door because she needs him for a new case which is at the home he was at moments ago.

She tells him that the whole family is dead except for one little girl named Wren. Who seems to be the main character in future issues. There are a lot of mysteries surrounding this character. He tries to comfort her by telling her a story about how his older brother would always protect him when things were scary. They both share a history of abuse as children so he feels like he can help her. She goes to reach for his hand but once they touch the room is red again. She breaks away screaming, trying to get away from him. Rightfully shocked at the reaction, he backs away. Horrified with himself he runs to the bathroom in a panic. Creepy images flash through his mind as he hyperventilates. He then wakes up back in his bathtub with a weird glowing marking on his back. Another instance of loss of time is triggered by the girl.

He shows up at the police station thinking he’s hurt, people. He thinks it might be from the drugs he’s been taking but when he gets there the police station collapses in on itself and a bloody Wren walks out crying. The issue ends with a cliffhanger that will leave the audience wanting more. House of Slaughters’s Tate Bombal is the writer of this issue, this being his first original series. So far I can say that I’m really intrigued by where this comic series is going.

I do want to know more about our main character as the series goes on because of his psychological state as of now there is a lot of mystery surrounding him. The same goes for Wren. She seems to trigger Greyson’s visions as well as have a power of her own. There is a mystery in this whole issue but it’s only the first of many so they’re still setting the mood and world-building. As of right now, I’m very interested to see where it goes and will definitely keep my eye on it as more issues get released.