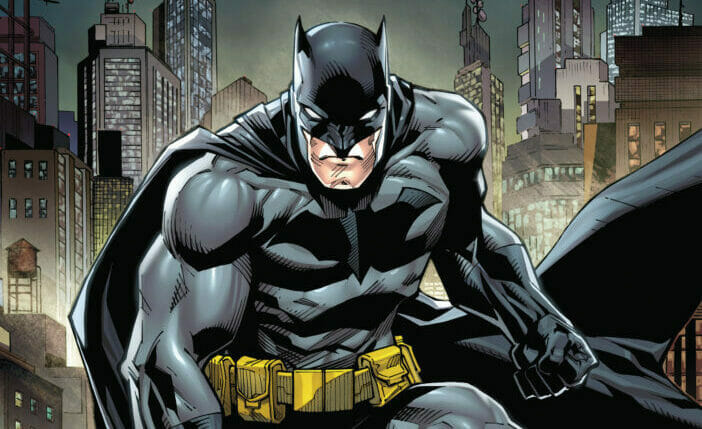 After finishing his Abyss saga with Batman #118-#121, writer Joshua Williamson is underway with the latest DC Comics event, Shadow War. Having been set up in both the Deathstroke Inc & Robin comic titles respectively, Williamson started with a bang. Shadow War Alpha #1, the first issue in the Shadow War event, featured the assassination of Ra’s Al Ghul & the wounding of his daughter, Talia, at the hands of Deathstroke, or so we thought…

Having been later revealed that this “Deathstroke” is an imposter, Batman, Robin (Damian Wayne), and the newly formed Demon’s Shadow (Talia Al Ghul’s new group of supervillains) all want a word with the infamous assassin but are yet to discover it is an imposter. So, let’s see what Batman’s next moves are going to be after Ra’s death.

We pick up with the Deathstroke impersonator standing over a destroyed city saying to himself that the people must pay for what they did to you, referring to the wreckages. This is important to note as it lays the foundations for who exactly this imposter may be (continue reading below for more).

The panel’s then cut to Batman and Director Cameron Chase (Director of the Department of Extranormal Operations) investigating the scene where Ra’s Al Ghul had been assassinated. Batman ponders on why “Deathstroke” was able to slip by unnoticed when he had numerous eyes-in-the-sky watching over Ra’s press conference. But what he doesn’t know is the culprit had dug a tunnel into the center of Washington DC (where the conference had taken place).

Batman notes that it would take a large tool to be able to accomplish this and they would have heard the culprit digging through, but he also notes that Deathstroke is one of the greatest assassins in the world and claims that “Deathstroke” didn’t then kill Talia Al Ghul, after her father, for a reason. But as Director Chase goes to ask why he would keep Talia alive, but in Batman fashion, he performs his disappearing act and he’s long gone from the scene.

We now pick up with where we left the real Deathstroke and his Secret Society back in Shadow War Alpha #1 where the whole Deathstroke Inc complex in Zandia is being invaded by the Demon’s Shadow & the League of Shadows ninjas. Deathstroke, Respawn, Prometheus & Deadline all attempt to fight off the ninjas with no time to explain that Deathstroke is being framed as they all struggle to deal with the ensemble of enemies.

Supervillain Angel Breaker, a member of the Demon’s Shadow, makes her way onto the scene and without hesitation, decapitates Deadline swiftly before ordering Detonator, another member of the team, to blow up the Deathstroke Inc building. Just before the building is blown up, Deathstroke and his clone son Respawn escape just in time by jumping out the window leading to them both needing to hide as they begin their journey on the run from Talia and her army.

As the two vanish into the scenery, we then pick up with Rose Wilson aka Ravager, daughter of Deathstroke drinking in a bar in Zandia after her confrontation with her father back in Deathstroke Inc #7. She is swiftly interrupted by Damian Wayne as he forces himself into the bar to convince Rose to help him hunt down her father to answer for his crimes, and before he even explains himself, Rose says yes to teaming up.

Finally, we travel to The Demon Palace (home of Ra’s & Talia Al Ghul) in Nepal as Batman infiltrates the palace, takes out a bunch of ninjas, and confronts Talia to accuse her of being the mastermind behind the death of her father to take control of his empire. She quickly shuts this down however by explaining that she knew of Deathstroke’s antics (as seen in Deathstroke Inc) but never expected him to act so swiftly as she angrily states she will never underestimate him again.

In a shift of tone, Talia asks Batman about where their son Damian is and is frustrated to find out that he has gone after Deathstroke alone but before she can angrily attack Batman, she falls to her knees, still healing from the gunshot wounds she suffered in Shadow War Alpha #1.

In a touching and heartfelt moment, Talia and Batman share a loving scene as Batman explains no matter what happens, he never wants to see Talia hurt with her reassuring him that he would be the only man she’d let in to see that. They then share a kiss and embrace each other as the issue comes to an end.

BACK UP STORY – SECRET MEETINGS

Years ago… There is a hit out on Robin and Gordon & Batman are discussing this. Could be whilst Gordon also questions Batman’s decision of putting a child out there by his side wearing all bright colors. Batman reassures Gordon that Robin can take care of himself as we then see Robin in the firing line of a sniper, acting as bait, as Batman swoops in to confront the assassin.

The assassin is revealed to be Deathstroke, but it’s the two’s first meeting as Batman doesn’t recognize the assassin. They instantly begin to fight as Deathstroke recognizes Batman’s elite training in an awesome nine-panel grid page as they’re battling one another.

They both knock each other down through a glass ceiling as Batman questions who Deathstroke is working for and why he is doing this, but Deathstroke remarks that the money’s good so he didn’t bother asking who it was, all he knew was that that mystery man had a “creepy voice” and wouldn’t stop laughing as the story comes to a close…

Williamson continues to deliver an intriguing plotline with Shadow War but this time with a slower-paced issue. With Shadow War Alpha #1 starting with a bang to get the ball rolling, Batman #122 offers a lot less action and a lot more dialogue, not necessarily a bad thing but the script spent a lot of time bouncing between characters’ set-ups.

Though not entirely criticism, it would have made more sense than a Batman issue would spend a large amount of the time portraying the Shadow War event from Batman’s eyes. Williamson’s script is straightforward and easily followed which involves some mystery behind the identity of the Deathstroke imposter.

Theory time… I believe the impersonator could be Geo-Force, an Outsiders member, and part of the Markovian Royal Family. His recent history with Talia Al Ghul, the tragedy of Markovia, and his sister Terra being subject to abuse by Deathstroke could all add up to his reasoning behind the imposter’s actions. The mystery is intriguing and I for one can’t wait to find out.

Howard Porter returns to translate Williamson’s work onto the page, as he has done for most of Deathstroke Inc, and does a great job yet again. If there’s one thing Porter can do superbly, it’s a dynamic action scene. The introduction of Angel Breaker is a standout for this issue with Porter’s pencils giving fans a brutal but delightful panel of blood splattering action.

Tomeu Morey continues his run on colors for the Batman title and does a brilliant job as always. Though numbing his pallet more than usual, it sets the tone for the gloominess hovering over the murder mystery but isn’t afraid to pop when it needs to. As mentioned with the Angel breaker panel, his reds channel the rage and violence within the pencils and allow audiences to feel the impact of the fight.

The backup felt slightly random and not too engaging, though a short story, it gets straight to the point with no time wasted. Fans are already tired of a Batman vs Deathstroke battle and Joker burnout but it appears as though the two are mixing into one for this new short story which will be interesting to see how people react to this.

Williamson’s script is yet again no-nonsense straightforward dialogue, the art by Trevor Hairsine is good & Rain Beredo’s colors are a highlight, particularly the way he makes Deathstroke’s classic costume pop on panel.

Batman #122 was a good read that ties into the Shadow War event. Though at a much slower pace than usual, it does set up everything to kick off for the issues to come. The art is great and the mystery behind the killer is fascinating but I’d strongly advise reading Shadow War Alpha #1 before diving into this.

Batman #122 is now available on digital and at your local comic book store!