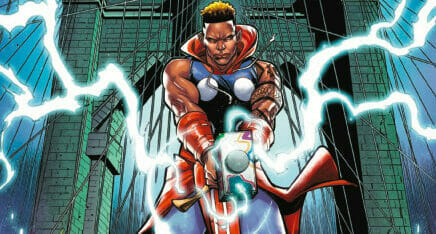 What If…? Miles Morales Became Thor


Miles Morales is Spider-Man, in some cases. Yet, What If Brooklyn’s hero became Asgard’s prince? What If Miles Morales was Thor instead?

Welcome back to this spectacular storyline! If you have not already, please check out my reviews for What If Miles Morales Became Captain America, Wolverine, and The Hulk. All three are fun and/or emotional stories that bring us to the fourth and current issue, What If Miles Morales Became Thor? Here, Miles will deal with his destiny and a Loki. Take your best guess as to who this world’s God of Mischief is. Join me in exploring the most fun you will have in this series. Let’s ponder the question, What If…?

As our young hero gets ready, he is spitting some bars. Afterward, he greets the streets of Asgard. The fact that Asgard resembles Miles’s hometown is a stunning visual. I cannot get enough of this nation’s look. As the stroll continues, Miles is conversing with two birds. The three talk about his big night, the commencement. Miles does not care for it. One of the birds even tried reciting Spider-Man’s iconic line. Yet, Miles shuts them up. Shortly thereafter, Miles meets up with his friends. Starling is Sif, Ganke Lee is Volstagg, and Fandral. I believe the last Warriors Three-member is Judge. The roommate of both Miles and Ganke in the main universe.

Anyway, the friends talk about Miles’s celebration. Miles is still unhappy about the potential of becoming his father’s heir. Sif condemns her friend and Uncle Loki appears. As he speaks to the warriors, Aaron aka Loki throws a nod at his Earth-616 counterpart. “I wouldn’t be much of a God of Mischief if I couldn’t prowl my way into a room”, said Uncle Loki. That was clever. Miles is invited by his father’s “brother” to go to another realm. Miles accepts the offer as the pair make their way to the Bifrost.

Far away, Odin or King Jefferson Davis is with Queen Rio Morales aka Freyja. Jefferson expresses his fear of his brother as he sees the Bifrost activate. A guard interrupts the two, informing Jefferson that his vault was broken into. We know who did that. Later, Miles and Aaron make it to Jotunheim. Miles is freezing his butt off as Aaron makes himself a fancy winter coat.

Miles again speaks of his unwillingness to accept this role. He is then attacked by some frost giants. This distraction allows Aaron to take the skull of his father, Laufey. Doubt continues to cloud Miles as he is fighting the monsters. With some wisdom from Aaron, Miles fights back and wins. The pair then make their return to Asgard with Laufey’s skull.

Odin’s Jubilee has begun. Much like some other attendees, Miles and Aaron are presenting the skull as a trophy/gift to the all-father. Jefferson is disappointed, knowing what is about to happen next. Aaron uses the Caskets of Ancient Winters to resurrect his father. This is similar to Thor: Ragnarok (2017). The Warriors Three evacuate the area as Miles fights the King of Frost Giants.

As this progresses, Aaron and Jefferson talk about their relationship. The latter accurately believed the backstabbing. However, Jefferson shows his disgust for his son by not believing in him. This stemmed from trusting Aaron. Suddenly, Miles breaks free from his shackles and defeats Laufey. Sometime after, Aaron is arrested for his crimes.

Before his sentence, Aaron is being condemned by Miles. Aaron then does the same, proclaiming that Miles will never be able to lead. Miles feels alone as both his father and uncle have turned on him. Sif comforts the prince for weeks to a month after. Then, the pair are interrupted by the three prior variants of Miles. They inform him that Uncle Loki has escaped and is causing problems for the earth. Great to see that these four and the original Miles will pair up!

Yehudi Mercado does a really good job with the writing! Seeing Miles doubt his worth was one thing. Next, seeing that doubt being shown by his family is another. It is almost sad if you think about it. Jefferson abandoned his son for hanging out with his uncle. Yet, did not truly know about his evil ways. While his uncle hates Miles because he won’t do what it takes to lead. This is all too relatable. In a way, a fate worse than death. Essentially, the story was a combination of Thor (2011) and the previously mentioned third film.

Before the sadness, the uplifting feeling also brought life to this issue. From the bars at the start to the musical references. It was a cool read! Yet, there are some issues. Even though some of the dialogue is fun to read, there are times when it is weak. For example, “By Odin’s fade, I command you, shield this lost son of Freyja from your might as your grace flows through him!” That alone was cringe. As for the art, Luigi Zagaria and Chris Sotomayor did a fantastic job! First off, Miles’s design never misses! The nice fade with the lightning bolt detail and blonde feature on the top.

Next, his hoodie resembles Thor’s regular costume. Then, the bottom potion pays homage to Miles’s Puerto Rican roots. Finally, the sneakers with the Mjölnir stimulate flying! So badass! I need a pair! Speaking of, the hammer’s design was simple and creative. It kind of reminded me of Party Thor in the What If…? (2021-) series. The overall urban look of Asgard is great! The graffiti detailing Thor’s adventure, the shoes on the wires, the Bifrost being the Brooklyn Bridge, and my favorite detail. On the first page of Miles’s introduction Rio is standing. She looks similar to the statue of liberty.

The headdress, the light next to her, and her role scream this sick easter egg! Also, I loved Uncle Loki’s design. The drip was awesome, especially for him. Fitting for the villain. Now, we have the cover. Done by Paco Medina and Rachelle Rosenberg. The pair do a great job of showing what to expect. Great illustrations and a strong hero, despite what he faces in the issue. These are the best use of photos I have seen in any recent comics! Nice way to show black culture in a positive light.

Want to discuss things further? Hit us up on Twitter, Facebook, or Instagram. And for more film, gaming, anime, TV news, trailers, and updates, keep it locked here at The Nerdy Basement. While you’re here, please consider supporting us on Patreon! It’s an easy way of supporting us so we can keep providing you with your Nerdy News!