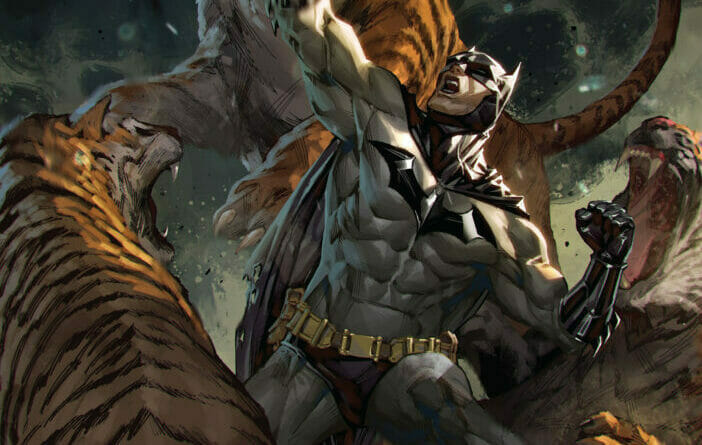 
Batman: Killing Time Chapter 4: That Should Do It

Batman: Killing Time #4 marks the two-thirds mark for this Batman comic run by Tom King and David Marquez. The opening pages of this issue are the strongest by far. They set up the overall arc and tone for issue #4 but I felt as the story went on, my care began to dwindle. As always, the story is broken up by time stamps, and these range between three hours in the future and 3000 years in the past. There are three distinct stories, with a small one sprinkled in at the end.

Firstly, we open up to Batman fighting tigers. Catwoman has set him up and despite the Wayne Foundation providing money to charitable rescue foundations, Batman is now literally punching the big cats his riches strive to save. While doing so, the mysterious Help character comes to his aid and by the end of the issue, they are joining forces and jump onto the Batbike to ride off into the wind. Quite comical, to be fair, but also a bit forced.

Secondly, The Riddler is being questioned by a foul-mouthed government agent named Nuri Espinoza. The beginning of this sequence is quite hilarious as she is dropping f-bombs like nobody’s business and even gives Edward Nygma a few bloody slaps around the head. I enjoyed this point as Nygma seems to have been outsmarted (a flashback shows Espinoza buying the diner’s employees’ time to ambush Riddler) but it is quickly thwarted by Selina Kyle creeping from the kitchen to easily dispose of the armed threat.

Thirdly, the past. Similarly, with the previous issues, we are privy to events in Ancient Greece both 2500 and 3000 years ago. The tale of a mother who killed her own son while seemingly possessed and the play inspired by it. A large chunk of this issue shows the play performed in a Greek amphitheater and, excuse my uncultured hide, but it’s a bit forced and boring. Don’t @ me! I am only saying this because there is yet to be a single payoff for this Ancient Greek storyline. Although the mysterious magical object seems to have ties with it, any answer or single thread has not been released.

The fourth story is that of Penguin. Still injured from his first issue beat down and seeking revenge, he hires one of the only people in Gotham who would decide with a coin flip. While his face was hidden, I am quietly looking forward to seeing Harvey Dent show his two faces in the next issue. I do love this little inset about Penguin not being as powerful as he thinks he is and doing all he can to fight back.

Although I have been loving this run so far and I think I still will once it’s finished, I felt that Batman: Killing Time #4 has been its weakest point. It started strong, with some potentially interesting characters and a splash of humor, but fell flat as the combination of storylines seemed somewhat like filler. Having The Riddler and Catwoman so easily escape multiple government agents with the flick of her whip felt cheap despite also showing the talent of Selina Kyle.

The overdrawn Ancient Greek play littered with Shakespearean-type language felt more like a high school assessment than a Batman comic (and I love English literature!). And The Help joining forces with Batman as a “your enemy is my enemy” situation was too easy for my liking. The artwork was impressive as always. Small details input where you wouldn’t normally see them in a superhero comic, i.e. the facial features and expressions of characters.

When Riddler is struck, you can almost hear the slap and blood spatter oozing from the page. The Caped Crusader hammering on his Batbike is a powerful full-page spread, as is when a full-grown tiger is launching itself at him. I have particularly enjoyed the art style of Killing Time and am yet to be disappointed. Despite its misgivings, this issue will probably provide some answers in hindsight. A shortfall from the previous three issues but nothing that won’t excite and entertain any Dark Knight fan. Brilliant artwork, a touch of mystery, and a whole lot of fan-favorite cameos.