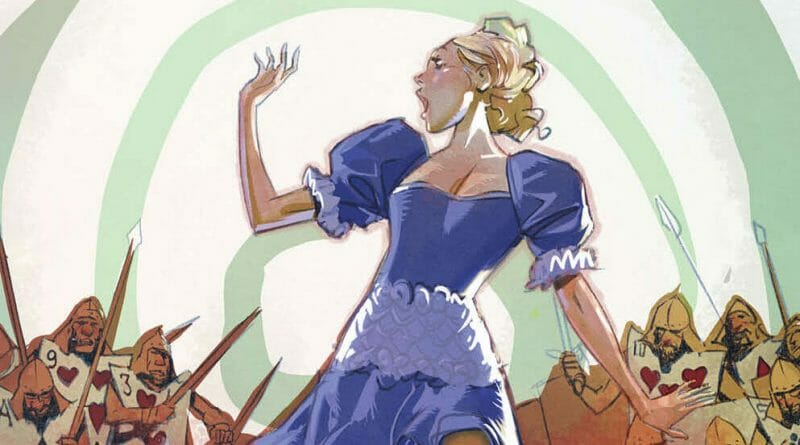 Alice Ever After #5: We’re All Mad (BOOM! Studios Review)


Alice Ever After simultaneously draws out and rushes its finale…how does this affect the series overall?

Alice Ever After #5 is the final issue in Dan Panosian and Giorgio Spalletta’s reimagined sequel of the classic tale, Alice in Wonderland. Once again, that cover!! If you have read my other reviews, you will know that I have adored this BOOM! Studios series but all good things must come to an end. The story kicks off with the Lutwidge family discussing Alice’s required treatment at the Sacred Heart hospital. All but Edith, Alice’s sister, are for the operation so Edith sets out to save Alice from the experimental lobotomy.

Meanwhile, in the Sacred Heart hospital, it’s all systems go as they begin to ready Alice for the treatment. Mistress Hulda has received an enormous wad of cash from Alice’s father and, despite a brief fling of charitable thought, decides to keep it all for herself. The twin guards attempt to grab Alice but she has fashioned a shiv from a pen and attacked them. Stabbing one in the leg and, as we later find out, the other on the eye. Personally, I would have liked to have seen that vicious act of brutality rather than it being off-screen.

Eventually, Edith arrived at the hospital only to find out she is too late—Alice is in recovery. In the final panels, Alice is in a garden when Edith calls to her. Alice seems glazed over and faded but it’s not just from the surgery. The story ends how I always thought it would, with Alice choosing to escape her newfound reality and live indefinitely in Wonderland. The End?

Endings are difficult; tying up loose ends, providing adequate characterization, and still creating an intriguing payoff for the readers with a twist or two. Although I loved this series, I felt the finale was drawn out and rushed all at once. We spent 3 or 4 pages repeating the inane conversation at the Lutwidge household and then skimming over potentially powerful action or terrifying surgery scenes.

I’m not a comic artist but I would have spent time on the operating table having Alice flick between reality and Wonderland as she tried to deal with her situation—really driving home the hideousness of the doctors and poor Alice. Alice Ever After was a great series overall. I absolutely loved the reimagining and, although it wasn’t exactly what I anticipated, it was still a fantastic story that touched upon mental health, addiction, family values, and capitalism. I would have loved to have more time in Wonderland but perhaps we will if Panosian and Spalletta reach back into this world. This issue for me was a 3/5 but the series overall was a 4/5.

Alice Ever After #5 is out now.