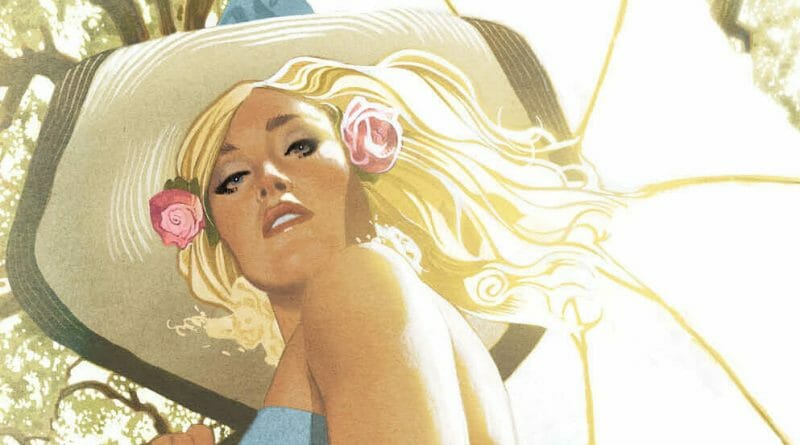 Alice Ever After #2 (BOOM! Studios Review)

Alice Ever After #2 is the most recent edition in the reimagined sequel by BOOM! Studios. Dan Panosian and Giorgio Spalletta continue their fantastic work at creating an alternate look at Alice’s life after Wonderland has disappeared. After admitting herself to the Sacred Heart Hospital, Alice is adjusting to life inside of the asylum. Without going into too much spoiler territory, it seems that not all is as it seems inside the establishment. The issue opens with a Wonderland dinner and dance party with all of the favorites but it slowly transitions from the dream-like first sequence when the Cheshire Cat creepily transforms into a man.

Here is where the reader, and Alice, meet a host of characters who are fairly familiar if you are a fan of the Alice in Wonderland story. Each person along the way directly replaces someone within Wonderland—she battles off an odd and potentially harassing altercation with two twin security guards who resemble Tweedle-Dee and Tweedle-Dum; The Headmistress is reminiscent of the Queen of Hearts and even the inmates or doctors look like the Walrus, Mad Hatter or the White Rabbit. Despite being obvious and on the nose, it is woven into the tale impressively.

I liked looking for little hints towards Wonderland and what we know as the traditional storyline. A croquet set, hearts, or a bucktoothed inmate who is perpetually late. But all of these Easter Eggs are only nice little extras within an intriguing mysterious storyline that is unveiling. Something is happening in the Sacred Heart Hospital. The Headmistress wants money and research grants for a skeptical surgery trial, but the question is where that money will come from. What are the medications for? What new surgery is occurring? Will Alice be next on the chopping block?

Writer Dan Panosian has done an exceptional job at keeping the reader questioning whether what Alice is seeing is real or not. It gives me Moon Knight vibes (even though these were written simultaneously). The adult themes of drug use, mental health, and potential sexual assault provide this comic series with an extra nuance of originality, and cement home the fact Alice is dealing with withdrawals and PTSD after an out-of-world experience.

The artwork by Giorgio Spalletta is cartoonish while also retaining a sense of realism, and this complements the story. Utilizing caricatures familiar to the audience in an alternate setting is fantastically unsettling and evokes similar feelings to the surreal nature of Alice’s experiences. A full-page spread using an upshot solidifies the imposing nature of the Tweedle-Dee and Tweedle-Dum characters, adding a tense ending to the issue. Panosian and Spalletta have successfully built on the first issue by adding a second layer to the story and creating a memorable and somewhat comical cast of characters. Alice Ever After is one of my most anticipated comic runs at the moment. Well done, BOOM! Studios.

Alice Ever After #2 is available at your local comic book shop now.