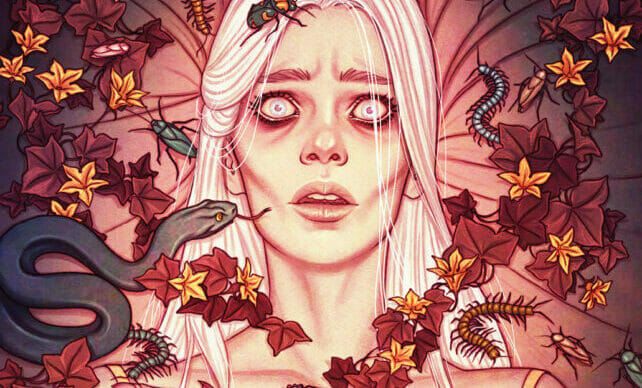 Sleeping Beauty Is Awoken In A Post-Apocalyptic Nightmare in Boom! Studios’ Briar #1

BOOM! Studios have announced an all-new comic book series BRIAR, a four-issue limited series from Eisner Award-nominated writer, producer, and director Christopher Cantwell (Regarding the Matter of Oswald’s Body, Iron Man, Halt and Catch Fire), rising artist Germán García (Ka-Zar: Lord of the Savage Land), and colorist Matheus Lopes (Supergirl: Woman of Tomorrow) that reimagines the classic fairy tale as an epic dark fantasy adventure. What if Sleeping Beauty never got her happily ever after… and instead had to save herself? Set in a brutal fantasy world that time forgot, this isn’t a fairy tale you know!

Christopher Cantwell is the current writer of the ongoing Iron Man series for Marvel Entertainment. His other comic book credits include The United States of Captain America and Doctor Doom for Marvel Entertainment, Regarding the Matter of Oswald’s Body, and Angel for BOOM! Studios, The Blue Flame for Vault Comics, and She Could Fly and Everything from Dark Horse’s Berger Books.

Chris is also a co-creator, executive producer, and showrunner of AMC’s Halt and Catch Fire and additionally served as an executive producer on the first season of the upcoming TV adaptation of Brian K. Vaughan and Cliff Chiang’s Paper Girls, coming soon to Amazon Prime.

“I’ve never gotten a chance to tell a high fantasy story of any kind, but I’ve always wanted to, ever since I discovered old Robert E. Howard stories. One thing that kept me hesitant was finding a proper way in—something new and different that also celebrates all the sword & sorcery fun seen in the best of the genre,” said Cantwell.

“In tandem, as I grow older, the world around us seems less and less stable with so many things falling into crisis. These two things came together in my head in the form of BRIAR… here’s someone that remembers the world one way, during a time of sheltered innocence, but has now overslept… and found herself in a place of complete entropic disarray. The question is, how will she even survive? And what happens when the plans for the entire rest of your life turn out to be completely meaningless and absurd? Where do you turn to in order to conjure up your own new meaning and purpose?”

“I’m delighted to be telling this story with Christopher. I love a good fantasy tale where I’m not constricted by boring details like reality, especially when we’ve got a main character with very intense but relatable motivations to fuel her through this strange new land. Can’t wait for you all to step into the world of BRIAR!” said García.

“We are thrilled to be working with Christopher again, and with Germán and Matheus for the very first time, on this brand new fantasy epic born out of the legend of Briar Rose, the Sleeping Beauty,” said Eric Harburn, Executive Editor, BOOM! Studios. “Unlike any fairy tale you’ve read before, BRIAR is the story of a heroine who takes survival into her own hands, even if it means getting them a bit bloody. My advice – don’t sleep on it!”

BRIAR #1 will be available for sale in September 2022.