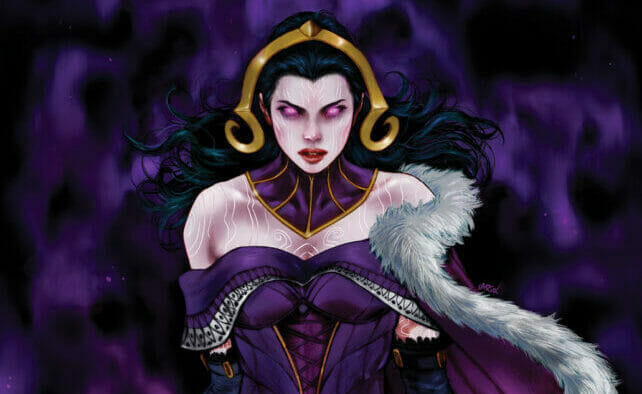 
BOOM! Studios have revealed the main and variant covers for MAGIC: THE HIDDEN PLANESWALKER #4, the latest issue in the four-issue comic book series from comic book and screenwriter Mairghread Scott (Transformers, Guardians of the Galaxy), artists Fabiana Mascolo (Firefly: Brand New ‘Verse) and Jacques Salomon (Magic: Master of Metal), colorist Francesco Segala (All-New Firefly) with Gloria Martinelli, and letterer Ed Dukeshire, about the deadly Liliana Vess and the hidden planeswalker she discovers who will change the fate of the entire multiverse forever, available in July 2022.

In the stunning climax, Isona Maive, the recently released Hidden Planeswalker, plans a reckless mission in the most dangerous corner of the multiverse—hoping to save her home plane, even if it imperils the rest of the multiverse. With Liliana’s pupil at the mercy of Tezzeret’s poisonous and misleading whispers, will Liliana have the strength to be a hero, even if it makes her feel like a villain?

MAGIC: THE HIDDEN PLANESWALKER #4 will be available for sale on July 27, 2022, exclusively at local comic book shops (use comicshoplocator.com to find the nearest one) or at the BOOM! Studios webstore. Digital copies can be purchased from content providers, including ComiXology, iBooks, Google Play, and Kindle.