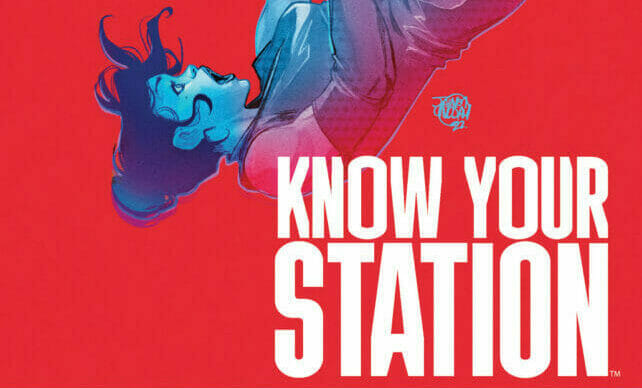 Know Your Station #1 Sells Out Ahead of Release, Heads Back For Second Printing

BOOM! Studios revealed today that KNOW YOUR STATION #1, the first issue in a five-issue limited series from the highly acclaimed writer Sarah Gailey (Eat the Rich, Magic for Liars), with star artist Liana Kangas (TRVE KVLT), colorist Rebecca Nalty, and letterer Cardinal Rae, that takes a stab at the ultra-wealthy, their dreams of escaping the very planet they’ve put in peril, and the consequences of a future that might not be so far away, has sold out at the distributor level before release!

“The mystery of KNOW YOUR STATION is only just beginning!” said Filip Sablik, President, Publishing & Sales, BOOM! Studios. “The twists and turns in this space station who-done-it expertly crafted by Gailey, Kangas, Nalty, and Rae is sure to captivate even more readers!”

Death is the great leveler, even for the 1%… the wealthiest people in the solar system abandoned the Earth for a private sanctuary in space, leaving everyone else to die amidst cataclysmic climate change. But the ultra-wealthy won’t be safe for long…A murderer is on the loose, specifically targeting the super-rich! Soon, Elise, an employee of the Avulsion Corporation, is wrapped up in a deadly investigation, with each issue of this outrageously macabre series featuring a new, diabolically different kill!

KNOW YOUR STATION #1 FIRST PRINTING will be available for sale December 7, 2022 exclusively at local comic book shops (use comicshoplocator.com to find the nearest one) or at the BOOM! Studios webstore. Digital copies can be purchased from content providers, including comiXology, iBooks, Google Play, and Kindle.