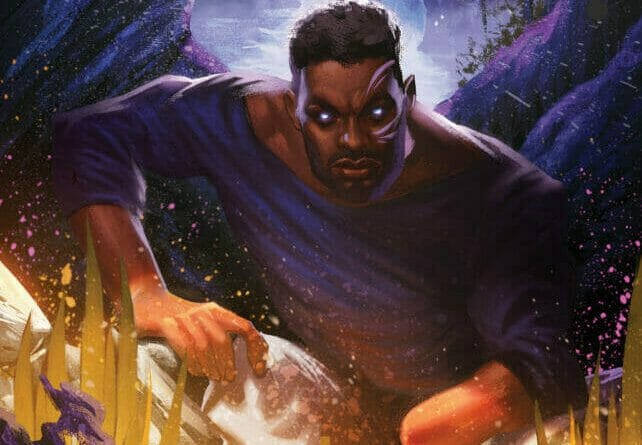 BOOM! Studios has revealed the official variant cover by fan-favorite artist Jenny Frison (Wonder Woman) for the launch of a brand new story within the bestselling horror series, HOUSE OF SLAUGHTER. Set in the world of the Eisner Award-winning phenomenal hit series SOMETHING IS KILLING THE CHILDREN, from the minds of award-winning writer James Tynion IV (The Department of Truth, The Nice House on the Lake) and co-creator Werther Dell’Edera (Razorblades), written by Tate Brombal (Behold, Behemoth), illustrated by highly acclaimed artist Antonio Fuso (Stargazer), colored by Miquel Muerto, and lettered by AndWorld Design.

HOUSE OF SLAUGHTER #11 sees the return of the fan-favorite ex-hunter Jace Boucher as he embarks on a brand new mission to keep not only himself but his young charges alive in the face of a looming danger. Available in January 2023.

No longer the monster hunter he once was and unaware of Aaron’s fate, Jace’s new mission is to protect the orphans under his care. But one of these children may be in even worse danger than Jace knows, as a strange pair of eyes watches him from the woodland shadows… Can Jace lay down his overwhelming rage and guilt long enough to save them all from the terrifying threats that surround them?

HOUSE OF SLAUGHTER #11 features main cover art by famed illustrators Mateus Manhanini (Wakanda) and co-creator Werther Dell’Edera with Miquel Muerto, as well as variant cover art by acclaimed artist Danny Luckert (Shock Shop), and more. HOUSE OF SLAUGHTER #11 will be available for sale on January 18, 2023 exclusively at local comic book shops (use comicshoplocator.com to find the nearest one) or at the BOOM! Studios webstore. Digital copies can be purchased from content providers, including comiXology, iBooks, Google Play, and Kindle.