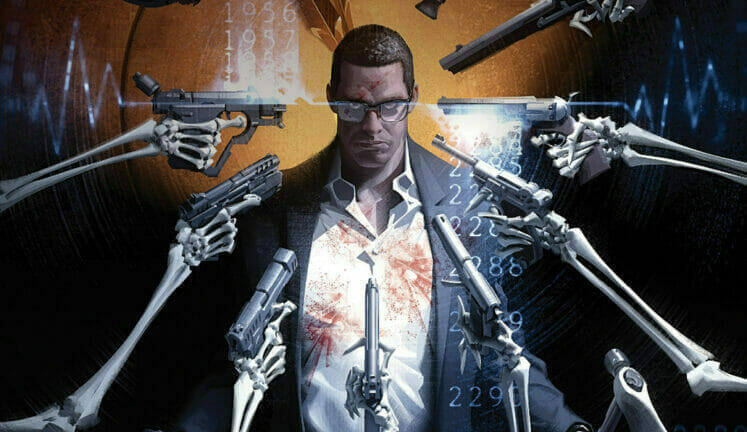 
Revenge, Time Travel, and Perennial Enemies in A VICIOUS CIRCLE #1

BOOM! Studios has revealed today the first look at A VICIOUS CIRCLE #1, the first issue in a prestige 3-issue original series from the director and creator of “Project Power”, and one of the screenwriters behind the upcoming Batman sequel, Mattson Tomlin, with Lee Bermejo, the iconic artist behind the smash hits “Batman: Damned” and “Joker”, and letterer Becca Carey (Buffy the Vampire Slayer) about two men cursed who roam across time and space in an unending cycle of violence and revenge; the new limited series is set to hit comic book shelves this month!

In A Vicious Circle, readers will follow Shawn Thacker, a trained assassin from the future who seeks revenge on the only other man with his affliction—each life they take forces them both to involuntarily travel between vastly different past and future eras. Spanning from 22nd century Tokyo to 1950s New Orleans to the Cretaceous Era and beyond, the two mortal rivals are locked in a battle of wills that spans millions of years, all to alter the course of history.

With each time period, legendary artist Lee Bermejo adjusts his artistic style to pay homage to luminary comics artists and historical master painters, presented in a prestige, oversized format! Lee Bermejo will be flexing his artistic muscles in this limited series and the first look at the interiors that follow below are a testament to Bermejo’s artistic prowess which will make this series a must-read for fans of Tomlin and Bermejo alike.

Take a look at the main cover and variant covers of the upcoming series below and take a look at some of Bermejo’s stunning interior pages before this must-read title releases next Wednesday, December 14th!

Print copies of A VICIOUS CIRCLE #1 will be available for sale on December 14, 2022 exclusively at local comic book shops (use comicshoplocator.com to find the nearest one) or at the BOOM! Studios webstore. Digital copies can be purchased from content providers, including comiXology, iBooks, Google Play, and Kindle.