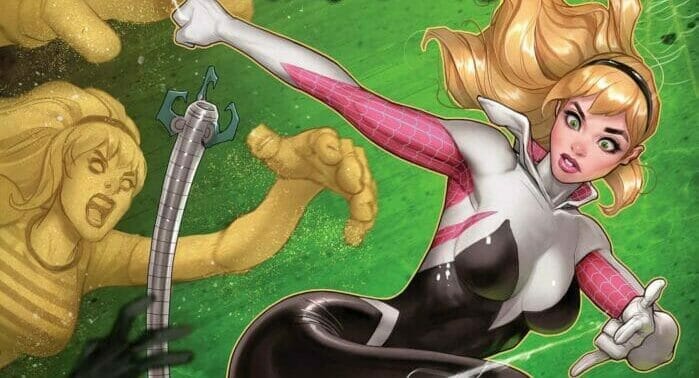 
This March, Ghost-Spider swings back into action in SPIDER-GWEN: SHADOW CLONES by Emily Kim and Kei Zama

Spider-Gwen aka Ghost-Spider is back in an all-new five-issue limited series, Marvel Comics has announced. Fresh off SPIDER-GWEN: GWENVERSE, which introduced exciting heroic versions, yes versions, of Ghost-Spider/Spider-Gwen from throughout the Marvel multiverse, see Earth-65 Gwen Stacy headlining this all-new limited series. But this time around, instead of meeting new allies, she’ll be confronted by dangerous new foes!

Written by Emily Kim (Silk, Tiger Division) and drawn by Kei Zama (Edge of Spider-Verse, Marvel’s Voices: Identity), SPIDER-GWEN: SHADOW CLONES will turn Ghost-Spider’s life upside down as she’s targeted by clones of herself based on Spidey’s greatest villains! Over the course of five daring issues, readers will see the debuts of a host of new Gwen-villains, all once again designed by visionary illustrator Peach Momoko!

“I was a little nervous taking on Spider-Gwen because she’s such an iconic hero,” Kim said. “But the rich story premise and fantastic team has made the process a blast. I’ve quickly fallen in love with Gwen and her unique voice and am excited for people to see how she handles a crazy slew of Gwen clones.”

“There’s a lot of fun things about drawing Gwen Stacy and Ghost-Spider,” Zama added. “I’m especially excited to draw bold battle scenes of Ghost-Spider and come up with ways to create exciting compositions. It’s also really fun to draw the expressions of Gwen Stacy. I’m really glad to draw these new villains designed by Peach Momoko. I didn’t expect to collaborate with her in this way.”

Hailing from an alternate reality where Gwen was bitten by a radioactive spider and gained spider-like powers, Ghost-Spider has been embraced by comic fans since she debuted in 2014. Over the years, readers have watched Ghost-Spider rise as one of Marvel’s brightest heroes but now they and Gwen alike will witness her at her most twisted!

Ghost-Spider comes face-to-face with some of the deadliest Spider-Man villains, including Doc Ock, Sandman, Vulture, and more! But wait… Why do they all look like…Gwen?! Follow Gwen down a dark path as she must find and stop whoever is cloning her into infamous Marvel villains!

Check out David Nakayama’s cover of the debut issue and stay tuned in the coming weeks for the reveal of Peach Momoko’s Gwen designs as well as Greg Land’s series of homage variant covers!