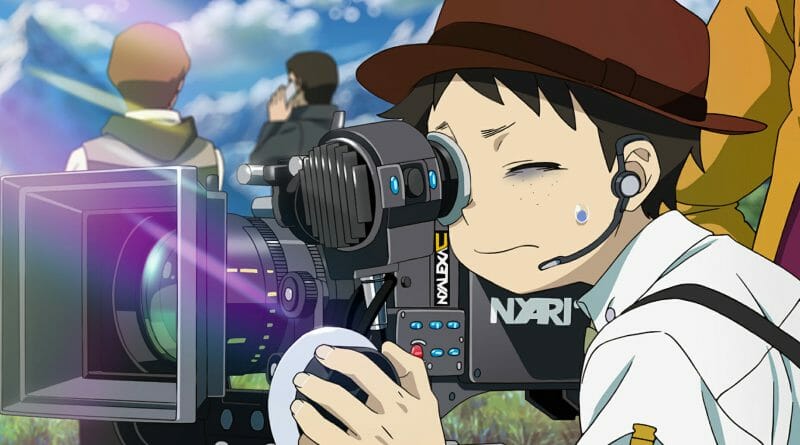 ‘POMPO THE CINEPHILE’ Review: A Love Letter To The Art of Storytelling and Filmmaking


‘Pompo The Cinephile’ is nothing short of fulfilling and relatability

We’ve all wanted to be creative in some way, shape, or form. We have dreams, we have aspirations, and we’d love to chase those dreams and make them a reality by any means necessary. Whether that’s giving up your social life, romantic relationships, daily life, habits, and routines, to even a full-blown change of scenery, it goes without saying that the journey on the road to success is nothing short of risky and full of sacrifices.

Risk and sacrifice, along with dedication and self-belief are the key components to making your dreams a reality. Something that those who have failed or quit along the way ultimately come to realize was something that lacked. It’s not just on them but also on those around them, the people closest to them. That inner circle who makes you, you. You become what you are surrounded by and ‘Pompo The Cinephile’ couldn’t ring truer to that statement.

‘Pompo The Cinephile’ follows Gene Fini a film producer and aspiring director, and assistant of Joelle Davidovich “Pompo” Pomponett, a prodigy film producer who turns any film she touches into a massive hit. We also follow Natalie Woodward an aspiring actress and Pompo’s biggest star Mystia, the lead star in almost all of Pompo’s films.

Looking to gain insight on how to create his own film, Gene stumbles upon a script written by Pompo. Blown away by the masterpiece she has written, Pompo tasks Gene to direct the film, thus propelling him on the creative journey to make his directorial debut.

What ensues is a love letter to the art of storytelling and the art of filmmaking while highlighting the often task that is being a creator and someone who wants to be in the creative field. Pompo gives the viewer an inside look at the struggles of a couple of aspiring creatives and how they handle being given the opportunity of a lifetime, the dream they’ve both have been working so hard for; while also highlighting the heavy burden that is imposter syndrome.

While also finding and cementing your purpose in life. ‘Pompo The Cinephile’ is nothing short of fulfilling and relatability. From seeing Natalie struggle with landing an acting gig to seeing Pompo and Mystia accomplish everything they set their minds to, to even watching Gene struggle, overcome, persevere, and burn out, to still end up getting the job done. The film shed’s such a bright light on how overwhelming this field can be and how burnout affects your health drastically.

But also shows that creating anything in life, in this film specifically, creating a film, is a team effort. That everyone from the film’s crew, to the producer, director, actors, assistants, friends, and family, all play an integral part in the creative process no matter how deeply they are involved in the project. Bringing it back to the old saying I mentioned above, you are who you surround yourself with.

We watch a group of creatives become more than just creatives, they become friends and ultimately build a sense of family within themselves. Continuously inspiring each other throughout this journey. We also see how the personal stories behind the inner film’s creative team, also inspire the outside world aka the film’s audience. It is a beautiful story, it’s relatable and inspiring and you can’t help but cheer and root for the characters for the entirety of the film.

Outside of the film’s stellar animation and the story is the film’s editing. Something that can make or break a film as it is crucial to how the audience engages with the film as you transition from scene to scene. Using a more artsy and over-the-top animation style to encapsulate what an editor goes through as they are editing any sort of project is one of the film’s strongest suits.

The film also uses the editing table as a metaphor for cutting out all of your bad habits and other desires as a way to highlight the sacrifices people make to become successful, something that is also prominent in Gene’s film. But also as a way of trimming the layers of your surroundings in order to find yourself within the mess that has been created. We as humans often lose ourselves trying to achieve and pursue our dreams that we often forget the reason we started this journey in the first place.

By the time the film ends, we as the audience and the film’s characters all realize that pursuing your dreams, while risky, is worth every sacrifice you make. Achieving said dream will make it all worthwhile and you ultimately appreciate the journey and those hard times you had to endure because you wouldn’t have gotten to where you are now if it wasn’t for those trials and tribulations.

‘Pompo The Cinephile’ is a love letter to the art of storytelling and the art of filmmaking. If you’re someone who aspires to pursue a career in filmmaking you will be enamored with this story and find it super relatable. The characters are engaging, likable, and worth rooting for. The animation is fun and captivating, providing visually pleasing aesthetics and still frames that will make you truly appreciate all of the work that goes on behind the scenes. It is a journey of passion, perseverance, and achievement and it has skyrocketed its way to my top ten lists of anime feature films that I’ve personally enjoyed and consumed throughout the years.