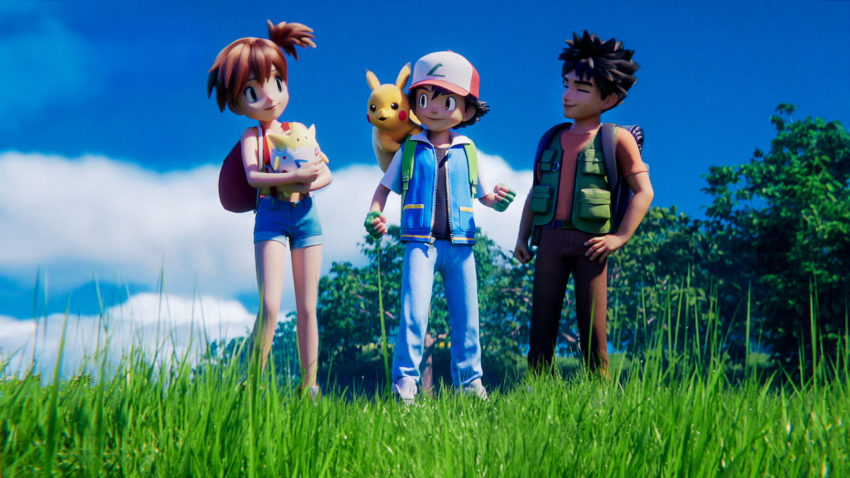 POKEMON: MEWTWO STRIKES BACK EVOLUTION BRINGS BACK NOSTALGIA IN THE BEST WAY EVER! – (REVIEW)

Pokemon: Mewtwo Strikes Back Evolution is not a scene by scene remake of the original film, but the film faithfully remakes the original with new scenes, expansion of the story, new dialog and a complete visual upgrade that is sure to please old and new Pokemon fans alike.

Just like the original, Pokemon: Mewtwo Strikes Back Evolution follows the story of Mewtwo’s successful creation in Dr. Fuji’s lab. Mewtwo is cloned from a fossilized piece of Mew’s DNA. Finding himself far superior to all humankind and Pokemon alike, Mewtwo is on a quest of self-discovery and purpose. While also wanting to bring the world down to its knees so he and his clone army of Pokemon can rule the world.

The best thing about this film is the visual upgrade. Using Netflix’s new staple of animation style (3DCG), Mewtwo Strikes Back Evolution successfully manages to take you a nostalgia trip beyond your wildest dreams. The film is not reinventing itself or reinventing animated features in any way, but the visual style is much more appealing to the world of Pokemon than it has been for other Netflix Original Anime.

The different perspectives of cinematography also elevate this feature film. More specifically when the Pokemon’s special attacks are used and when the film showcases any scenic scenes.

The film also does a much better job than the original at explaining Mewtwo’s motives, which is something I personally had a gripe with when I rewatched Pokemon: The First Movie. Other than that specific part of the story we aren’t getting new. The film is still a remake, almost in verbatim.

I remember growing up as a kid playing and watching Pokemon and wondering how the world of Pokemon would look like in real life and this is for sure the closest we will ever get to it (sorry, Detective Pikachu).

However, I do have minor nitpicks when it comes to the film’s animation. Some of the Pokemon aren’t rightfully textured like Charizard for example. He’s essentially a lizard/dragon hybrid Pokemon but his skin is almost too smooth and that was a bit bothersome to me.

In the same breath, other Pokemon like Pikachu are perfectly textured and rightfully proportioned in their animation. Another cool aspect of the film’s animation was seeing the accurate size ratio between humans and Pokemon.

One out of the many that come to mind is Slowpoke. Slowpoke is always depicted as a very small Pokemon in the anime and video games but is depicted in this film in a size that I would’ve ideally pictured it. Especially when this Pokemon evolves into Slowking.

I also want to mention one of my biggest gripes in the film. I don’t feel like many folks will agree with me but Mewtwo’s cloning lab was way too dark. I understand an argument can be made because the lights are out but some scenes were still too dark and just didn’t blend well with the 3DCG animation.

For what it’s worth, Pokemon: Mewtwo Strikes Back Evolution is a really good nostalgia trip. I personally don’t want to see every single Pokemon film ever made, remade with this new 3DCG but I would like to see newer Pokemon projects use this animation style in the future. It’s one thing I really loved about this film.

I would like to see other Legendary Pokemon like Lugia, Suicune, Entei, Raikou, Ho-Oh, Yveltal and many others. As well as other Pokemon from Generation II and onwards. I think Netflix and Pokemon can cook something up that’s fresh and super original to cater to both new and old Pokemon fans while bringing this sort of realistic feel to the anime.

Something many Pokemon players both old and new have wanted to see. While we do the first-ever live-action Pokemon film in Detective Pikachu, I think Pokemon: Mewtwo Strikes Back Evolution while solely animated, does a much better job at bringing a sense of realism to the world of Pokemon.

A near-perfect remake of the original film, Pokemon: Mewtwo Strikes Back Evolution shines bright as a good nostalgia trip down memory lane. With its highlight being the new visual design that brings forth a sense of realism and a refreshing feel to an all-time classic.

Osvaldo MaderaFebruary 28, 2020A near-perfect remake of the original film, Pokemon: Mewtwo Strikes Back Evolution shines bright as a good nostalgia trip down memory lane. With its highlight being the new visual design that brings forth a sense of realism and a refreshing feel to an all-time classic. 8.0110
Your RatingUser Rating: 0 ( 0 Votes )
Share