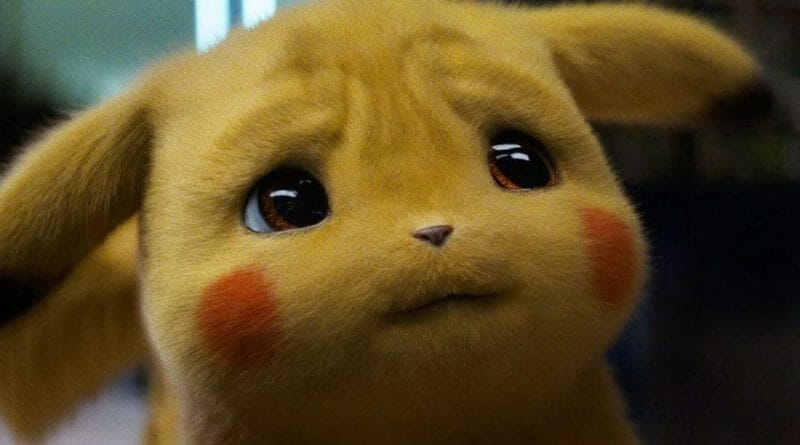 
If you keep up with me on any of my social media accounts, whether it’s our Instagram, our weekly podcast or even our Twitter account. You’d know I’ve been very vocal about how I felt about Pokemon: Detective Pikachu. If you haven’t…I will say it now and I will say it again. Before we got Detective Pikachu we should’ve gotten a live-action adaption of the main Pokemon universe rather than the spin-off.

While I understand why they went this route it probably wasn’t the best option in my honest opinion. We all love Pikachu and we love how cute and cuddly he is BUT to give him what is essentially his own solo film, just didn’t do for me.

So let’s get to the meat and potatoes of this first ever live-action Pokemon film which stars Justice Smith as Tim Goodman, Kathryn Newton as Lucy Stevens and Ryan Reynolds as Detective Pikachu/Harry Goodman. As they set on a personal quest to find Tim’s missing father Harry who is presumed dead, but has been alongside Tim this entire time as “Detective Pikachu” made a deal with Mewtwo and traded his life for Harry’s, thus losing all his memories pre-dating that specific moment.

Since when did this become a quest for the Soul Stone? Thanos really messed things up on a universal scale huh?

Justice Smith coming off his hilarious nerd role in Jurassic World: Fallen Kingdom leads the way and brings all the heart and relatability to this film. While I personally was skeptical of him in this lead role. I found him quite enjoyable, despite his awkwardness whenever he shared the screen with co-lead Kathryn Newton.

This movie also suffers from trying to borrow too many elements from the core Pokemon universe (sounds ridiculous, I KNOW!) and it really felt forced at some point. Especially when Pikachu is singing the main Pokemon theme…..doesn’t he have amnesia? Isn’t this some sort of fourth wall breaking? Once again…..Deadpool!

Enough of the bad….for now. Let’s look at the good. I can wholeheartedly say that when you do watch Detective Pikachu, you are immediately immersed into the world of Pokemon and how the world of Pokemon would look and feel like if it were real. I absolutely loved that. The CGI on SOME of the Pokemon were cool. Others looked AMAZING and others….not so much….I’m looking at you Audino and those gigantic creepy blue eyes of yours…..YIKES!!

And while we don’t get any big battles outside of Blastoise vs Gengar (Charizard vs Pikachu was barely a Pokemon battle) which was pretty awesome but once again it lacks what really makes Pokemon, Pokemon….no battle theme music and no Pokemon Trainers….I might also be nitpicking but I don’t understand why only certain Pokemon said their names when they talked. Pokemon like Pidgeotto and Bulbasaur were just chattering and whimpering animals in this universe and its just a disservice to the source material. To take it even further than that, there’s an Eeevee who evolves into a Flareon WITHOUT a Fire Stone! Did the filmmakers forget the rules that apply to evolving Eevee?

Mewtwo’s role in this film while to some degree adhered to the source gaming material this movie is based off of. They tried to squeeze in a little “Mewtwo Strikes Back” in there and it really didn’t work out as much as they thought it would. If they really wanted to go that route, once again…live-action adaptation of either the MAIN Pokemon universe or CGI/Live-Action remakes of the original animated films we all grew up watching. Plus we didn’t get Mew…..how do you have Mewtwo being created in a lab but do not have Mew in the film?! What?!

Overall this movie had its shining moments but those shining moments are heavily overshadowed by the film cramming in TOO MUCH fan service when it wasn’t necessarily needed. And it failing to really add anything special to the film, thus suffering the same fate as every single live-action video game film.