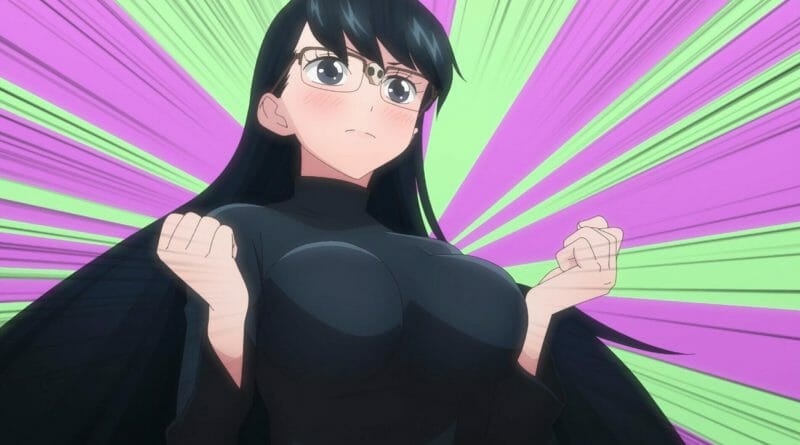 Now that Fudo and Desumi’s secret love affair is partially in the open, Love After World Domination shifts its focus away from the new couple to focus on one of Gekko’s villainous princesses, the Steel Princess. We open up the episode with Gekko having a team meeting, essentially naming a Princess of the Month, an award that goes to Desumi solely because of the beating she handed Fudo in the previous episode due to her jealousy-fueled outburst.

We start to notice that Beast Princess isn’t too fond of Desumi’s high achievements so there’s a bit of competition within Gekko’s inner circle. Spending some more time within Gekko’s secret hideout, we see Beast Princess and Steel Princess having lunch in the cafeteria. Desumi overhears a conversation being had between Beast and Steel regarding Steel’s self-worth and affections towards an unnamed person.

Seeing how Desumi has conquered love she forces herself into the situation and provides her unsolicited advice. Through this conversation, we learn that Steel Princess doesn’t see herself as someone who is worthy of being loved. She has low self-esteem, she’s self-conscious, and thinks everyone else around her is much better looking than her.

After discussing the situation with Fudo, Desumi comes to realize that she’s been projecting herself onto Steel Princess throughout this whole ordeal and has forgotten the most important thing about dating, relationships, and being a person…the importance of being yourself.

After this realization, Desumi and Beast Princess attempt to bring Steel Princess out of seclusion. After having to get through Steel Princess’s safeguards, Desumi manages to get to Steel Princess and convince her to not give up on love. The most important thing about love is being able to be yourself inside and out. And encourages her to profess her love for this mystery person.

Steel Princess breaks out of her metaphorical shell and reveals her true self, which I think we can all agree was not the look we were expecting to get with Steel Princess. That aside, she goes on to reveal that her love interest is Culverin Bear, despite all signs pointing to her possibly being in love with either Desumi or Beast Princess. While Culverin Bear is out here winning for us big boys, Culverin Bear being Steel Princess’s love interest feels like it came out of nowhere. Even if Culverin Bear reciprocated her feelings. They then go on to show their love for each other on the battlefield as they face off against the Gelato 5.

Meanwhile, Fudo and Desumi have once again snuck away to spend some time together, nearly being caught by Blue Gelato, however, Pink Gelato stops him from discovering the couple. Looking to further embrace their love for each other, Fudo and Desumi look to share a bento lunch box together and feed each other in order to consummate their relationship. However, this tender moment is disrupted by Fudo’s sudden appendix pain.

Being rushed to the hospital, Fudo undergoes emergency appendicitis surgery and had to be on bed rest. Now that Fudo is capable of eating, Hikaru attempts to feed him some apples. Deadset on Desumi being the first and only female able to feed him, Fudo refuses to eat; he does so again when his mother visits him and tries to feed him as well. Once Desumi arrives and is able to feed him, Fudo’s mother interrupts their moment and takes Desumi with her to her volleyball game, which Desumi crushes by the way.

Once the game is over Desumi and Fudo’s mother enjoy a nice walk and talk about Fudo and their relationship, which his mother is aware of, despite Fudo not saying anything about it. As any mother would, she asks Desumi to take her of Fudo and shows her a picture of him as a child. The biggest takeaway from this particular moment is that Fudo is wearing a Gelato 5 bracelet. While the series has solely focused on Desumi and Fudo’s relationship and is now branching out to others; we have yet to really get any backstory on the Gelato 5, their current members, and previous members.

As we learned in last week’s episode, Haru has only been the Pink Gelato for the last six months, since the previous Pink Gelato quit. We do not know the process behind becoming a member of the Gelato 5 or why the previous Pink Gelato left the group or if any other members have left as well. It’s probably one of the biggest questions that need to be answered in the series now that we are branching out past Fudo and Desumi’s relationship.

All in all, Love After World Domination continues to be wholesome, action-packed, and enjoyable. I continue to recommend this anime to everyone who is still on the fence about the series. The characters are becoming even more enjoyable, we’re learning more about our villains, and seeing that they aren’t as evil as they make themselves out to be. Bosslar’s letter to Fudo with a vase of flowers is the series’ best moment thus far.

Love After World Domination is streaming now on Crunchyroll.