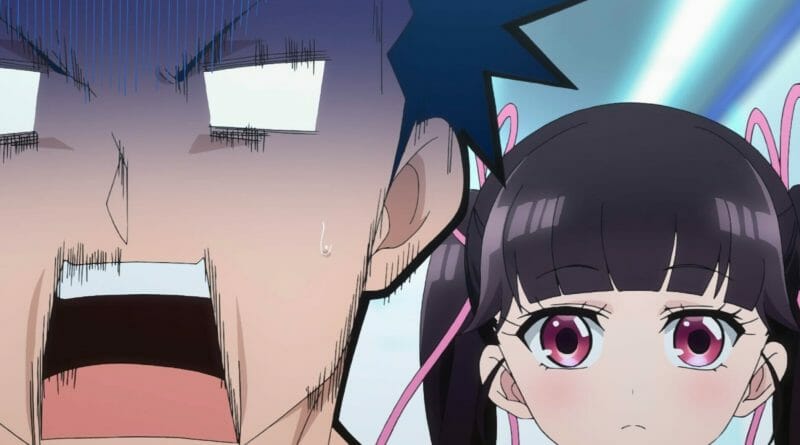 ‘Love After World Domination’ Episode 4 – Could You Please Tell Me Why? (Spoiler Recap/Review)


Fudo and Desumi’s big secret is no more, how do the couple fare now that the cat’s out of the bag? — Spoilers for Love After World Domination ahead!

After coming across a photo of Fudo and Desumi riding together on a roller coaster ride, Haru’s suspicion surrounding Fudo and Desumi’s possible relationship grows. But what happens when Desumi catches Fudo and Haru on what she assumes is a lunch date and a jealously fueled rage overtakes her senses as she assumes the worst in Fudo and their relationship.

We start this week’s episode of ‘Love After World Domination’ with Desumi leaving school with her friends. On their way home from school, they come across Fudo aka Red Gelato and Haru aka Pink Gelato having lunch together. With the entirety of the world unaware of Fudo and Desumi’s relationship, her friends assume that Fudo and Haru are dating, and how cute a couple they would make.

This sends Desumi into a fit of jealousy-fueled rage without knowing the real reason why Fudo and Haru are on this “lunch date”. We learn that Haru invites Fudo to this afternoon’s outing to find out whether or not he has a girlfriend and if the girl in the photo she saw at the amusement park is said girlfriend. After not building up enough courage to ask Fudo about this possible relationship, Fudo mistakes her intent as an inquiry to better her training.

We learn that Haru has only been a member of the Gelato 5 for six months, replacing their former Pink Gelato member. The real question here is, who is this former Gelato 5 member, and why are they no longer part of the Gelato 5? However, Fudo’s training rant convinces Haru that he can’t possibly have a girlfriend. They’re then interrupted by Gekko who commences a random attack, leading the charge is Culverin Bear and none other than the Reaper Princess herself, Desumi.

Joining the battle is the rest of the Gelato 5, as they battle Gekko, Red Gelato, and Reaper Princess are once again engaging in a 1:1 battle, however, Reaper Princess is not holding back. Trying his best to coordinate with the Princess and failing, Red Gelato notices that something is wrong. Hitting him with all she’s got, Reaper Princess also showcases a new ability.

Once they find themselves alone in an abandoned warehouse, Desumi continues her attack on Fudo. Fudo tries his best to fend her off but she is driven by jealous rage, ultimately, landing a hit on him. Before she can land a hurtful blow, she stops herself from doing so and reveals to Fudo what is going on with her.

We get to see a side of Desumi we have yet to see and this is her hurtful and vulnerable side, but also how she valued herself as someone who is not worthy of love. We have yet to get much context as to why she views herself this way despite her boiling it down to her being an outcast. She knows Fudo wouldn’t do anything to hurt her or their relationship but she reveals that she still felt jealousy seeing Fudo hanging out with Haru, despite the harmlessness behind it.

She reveals that her love for Fudo has made her jealous and weak and this isn’t who she is but Fudo being the good champ that he is reassures Desumi that he has no intention of hurting her and how he would never cheat on her. That despite being an awkward guy, he sticks to words and follows through on everything he sets his mind to. In this matter, specifically, that is being in love with Desumi and further building their relationship.

While they come to terms with the matter at hand and make amends, we get the shocking relationship that Haru was sitting in on the conversation the entire time. Confirming that Fudo is in fact in a relationship, but that his girlfriend is the enemy. Despite this revelation, Haru doesn’t bad an eye and continues being normal, even back at Gelato HQ.

Fearing the worse, Fudo spends the next week torturing himself with the possible ramifications of this revelation that Haru has just learned about. Despite those fears, Haru doesn’t let out his secret. Now that the cat is out of the bag, Fudo and Desumi continue to meet although not too secretly. Suspecting that they are being watched at the central park, Desumi sends Fudo to fetch her a drink.

After Fudo leaves the park, Desumi is approached by Haru who challenges her to a fight for Fudo’s love. After a brief confrontation that ends up with Desumi defeating Haru, we get confirmation of the question we have all been asking ourselves since last week’s episode. Does Haru have feelings for Fudo… a big shocker, she does!

However, what began as a fight for Fudo’s love turns into a moment of compassion and empathy between Haru and Desumi. Haru reveals how Desumi once saved her life while she was being attacked by some thugs and how she never suspected that Fudo’s girlfriend would turn out to be that person, the person who inspired her to fight for justice and join the Gelato 5; while also being a commanding officer in the Gekko Secret Society.

Once Fudo returns, he finds Haru quietly sleeping on Desumi’s lap. Fudo comically believes that Desumi has actually killed her. Fudo learns about Haru’s feelings for him and when Haru wakes up they head home all finding a common ground and partial acceptance that Fudo is in a happy and committed relationship with Desumi. Haru, however, despite accepting her loss warns Desumi that if she doesn’t treat him right, she will steal him from her.

Overall, this week’s episode of ‘Love After World Domination’ was a solid one. If you read my review from last week and listened to our most recent podcast episode, I do make it a point to highlight that sooner or later this secret would get out but not this soon; and granted, only one person knows. I admire the series for keeping the relationship a secret still as it will only add to the intrigue of Fudo and Desumi’s journey.

It will also now add an extra layer to the rivalry between Gekko and the Gelato 5. More specifically Haru and Desumi are two women who are in love with Fudo. I can also admire the series’ sense of girl code and not wanting to interfere with someone’s happiness. ‘Love After World Domination’ continues to deliver and the journey so far has been great. If you aren’t watching this series yet, please do yourself a favor and watch it.

‘Love After World Domination’ is streaming now on Crunchyroll.