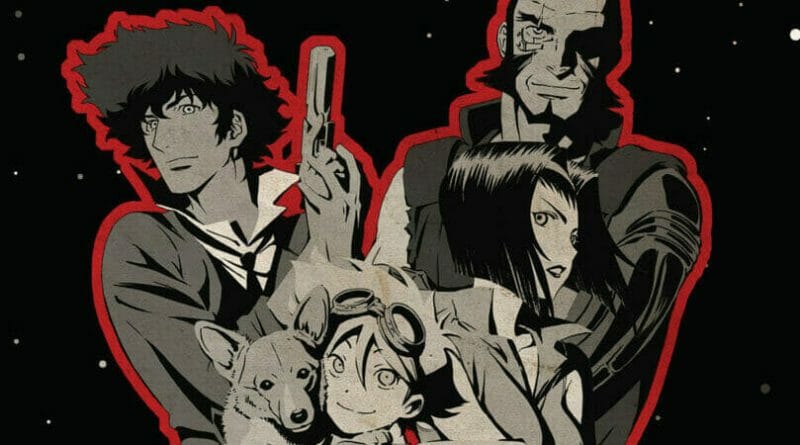 
In addition to Cowboy Bebop, Crunchyroll’s April 2023 Home Video Highlights Include Aoashi, One Piece, and Legend of the Galactic Heroes: Die Neue These!

This April, Crunchyroll will celebrate the 25th anniversary of Cowboy Bebop with a special home video release! The neo-noir space western will receive a limited edition Blu-ray box set on April 4, 2023, just in time for the 25th anniversary of the beloved anime series, which originally aired on April 3, 1998! Each set will exclusively include a special metallic collector’s box, exclusive art cards, and a never-before-seen 25th-anniversary retrospective video that will be new to the set’s special features.

The Bebop crew is just trying to make a buck. This motley lot of intergalactic loners teams up to track down fugitives and turn them in for cold hard cash. Spike is a hero whose cool façade hides a dark and deadly past. The pilot Jet is a bruiser of a brute who can’t wait to collect the next bounty. Faye Valentine is a femme fatale prone to breaking hearts and separating fools from their money. Along for the ride are the brilliant, but weird, hacker Ed and a super-genius Welsh Corgi named Ein.

In a quiet rural town, the spotlight of a local junior high school football team rests on one player: Ashito Aoi. Known for his unpredictable moves and self-centered playing style, Ashito is the sole powerhouse pushing his team through an important high school preliminary tournament. However, their win streak is short-lived—an opponent causes Ashito to lose his temper and act violently, resulting in his removal from the rest of the game.

Without their star player, the team is quickly eliminated from the tournament. Just as he believes all hope is lost, Ashito is approached by a youth team coach named Tatsuya Fukuda who senses potential in him, and Fukuda invites him for tryouts in Tokyo. In an unfamiliar setting surrounded by talent, Ashito must bring out the best of his ability to prove himself and secure what could be a life-changing career.

Legend of the Galactic Heroes and One Piece Arrive April 11, 2023

Based on the novel series by Yoshiki Tanaka, Die Neue These follows a long-running war between the Galactic Empire and the Free Planets Alliance. Reinhard von Lohengramm and Yang Wen-li, tactical geniuses and respected rivals battle each other to decide the fate of the galaxy.

Monkey. D. Luffy refuses to let anyone or anything stand in the way of his quest to become the king of all pirates. With a course charted for the treacherous waters of the Grand Line and beyond, this is one captain who’ll never give up until he’s claimed the greatest treasure on Earth: the Legendary One Piece!

All titles mentioned above are now available for pre-order and also can be streamed on Crunchyroll. Visit the Crunchyroll Store for more home video offerings.