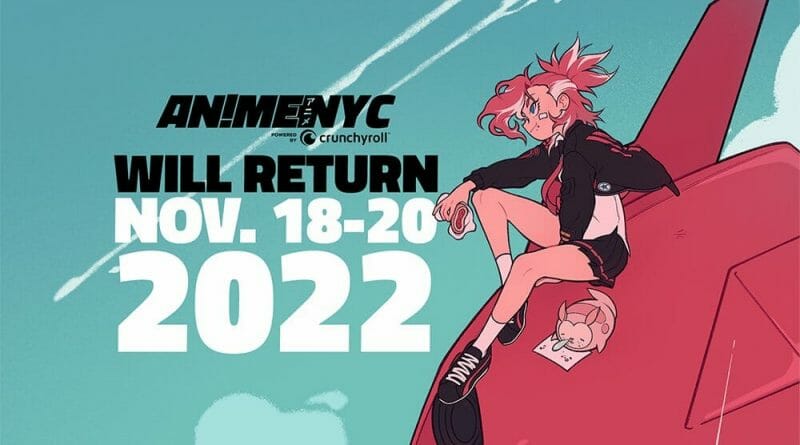 
Anime NYC powered by Crunchyroll is one of North America’s largest conventions dedicated to anime, manga, and Japanese pop culture will be celebrating its 5th Anniversary at New York’s Javits Center (655 W 34th St. at 11th Ave) from November 18-20. The convention features three days of over 400 exhibits, exclusive screenings, extensive panels, performances, and appearances by some of the biggest creators in Japan, all under one roof. The fan-favorite convention will have over 200 hours of programming planned for that weekend.

Over 50,000 fans are expected to gather at Anime NYC from all 50 states and 27 different countries; including Canada, Mexico, England, France, Germany, Australia, China, Brazil, and Japan. Anime NYC will also welcome guests and panelists from across the U.S. and Japan. With confirmed appearances from Shuko Murase, Akihiro Nishino, Studio TRIGGER, Yoko Shimomura, and Johnny Yong Bosch.

The schedule for Anime NYC 2022 weekend is as follows:

10 AM to 4 PM – Panels, Screenings, and Special Events

Under the direction of Eric Roth, the concert features the New World Players chamber ensemble performing exclusive arrangements from throughout the FINAL FANTASY series in the thrillingly personal style of this outstanding musical production. And as a very special treat for fans at Anime NYC, FINAL FANTASY XV, and Kingdom Hearts composer Yoko Shimomura will make a rare in-person appearance at the concert. A concert ticket and a 3-Day or Friday Badge are required to attend.

On Saturday night, November 19 at Anime NYC, Cosplay takes over the Main Stage with the Anime NYC Masquerade. Guests will compete for the chance to win prizes for craftsmanship, showmanship, and of course, bragging rights. Costumes spanning the worlds of anime, manga, video games, musicals, books, and even comics and movies are all eligible for entry. Also, throughout the weekend, Anime NYC will present Cosplay Meetups, where fans of a particular series or character can gather in costume, mingle, and get to meet others who share their passion. Feel free to click here for a full schedule.

“We’re very, very excited for Studio TRIGGER to come to Anime NYC,” said Anime NYC show director Peter Tatara. “They have an attitude and a style like no one else, and this has won them a fervent fanbase across the US and all around the world. We’re thrilled to celebrate TRIGGER, Promare, and their passionate community. ”

TRIGGER’s biggest hit in the US may be Promare, a feature-length adventure following the epic battle between a race of flame-wielding mutants and the team of heroes defending humanity. Promare’s told at a blistering pace and is filled with the visual bombast which has become TRIGGER’s trademark. Its kinetic energy and the audience response to it has evolved into it becoming the “Rocky Horror Picture Show of anime”. Promare was released in the US by GKIDS.

The voice behind Mob Psycho 100’s “Mob” is coming to Anime NYC and is officially the convention’s Guest of Honor. Mob Psycho 100’s cast is led by voice actor Setsuo Ito, who won the Best New Actor Award at the 2017 Seiyuu Awards for his role of Shigeo “Mob” Kageyama. He will appear on an official Mob Psycho 100 panel presented by Crunchyroll and WB Japan and sign autographs for fans.

“We’re honored to welcome Setsuo Ito to Anime NYC,” said Anime NYC Show Director Peter Tatara. “We’re thrilled to welcome the voice of Mob himself in celebration of the Anime’s third season, and we know fans across New York and around the US will be equally excited by this rare opportunity to meet him.”

TurtleMe, the creator of the #1 hit webnovel and webcomic series The Beginning After The End on Tapas, will debut his face for the first time to fans and press at the Tapas panel The Beginning After the End (Tapas): Creator TurtleMe Reveal! at Anime NYC Friday, November 18th at 2 PM ET. TurtleMe will also participate in several events throughout the weekend including a Q&A at the Yen Press Industry Panel on November 19th at 12PM ET, and several signing sessions.

“I am honestly so excited to meet my fans face to face for the first time. I started publishing The Beginning After The End on Tapas in 2016 and the constant fan support around it is the reason why today it has been made into both a webcomic and a printed graphic novel, I owe it all to them. I’m in awe, these fans inspire me every day to become a better storyteller, and to be an official guest of the con feels like a big step for me as a creator.” said TurtleMe about his appearance at Anime NYC.

The Beginning After the End publishing partners Tapas (webcomic and webnovel) and Yen Press (graphic novel) will collaborate at Anime NYC to connect this beloved creator and story with fans around the world traveling to the convention. Both publishing partners will have a booth on the convention floor – Tapas (Booth #554) featuring free TBATE poster giveaways and Yen Press (Booth #1516) selling the TBATE graphic novel along with other fun giveaways. Tapas is also hosting a sweepstake in partnership with Anime NYC on social media giving away Anime NYC weekend passes to one lucky fan!

“Tapas in its DNA is a creator-first platform and TurtleMe is one of our original creators, we have really grown together. To be able to support him at Anime NYC and connect TurtleMe to fans that have supported The Beginning After The End and our platform for years in a big way is really exciting and incredibly rewarding.” said Tapas CEO Chang Kim.

“We are elated that TurtleMe will reveal his face for the first time at Anime NYC,” said Anime NYC show director Peter Tatara. “TurtleMe pushes boundaries, and as a story that’s inspired by both western and eastern fantasies, The Beginning After the End has really captured reader’s imaginations. Those who will attend the TurtleMe Tapas panel are in for a treat.”

TMS will be presenting a world premiere screening and panel discussion of HIGH CARD, as well as a panel and trivia contest for LUPIN THE 3rd fans. The HIGH CARD world premiere screening and panel will take place on 11/19 at 7 PM in Panel Room 1. HIGH CARD is TMS Entertainment’s original multi-media project, with an anime to be released in 2023. The story is written in collaboration with Homura Kawamoto and Hikaru Muno, the renowned writer-creator brother duo behind the hit series “Kakegurui.”

Authors Homura Kawamoto, Hikaru Muno, and producer Hiroki Okamoto will be in attendance for the screening, panel, and giveaway, and Kawamoto and Muno will also be participating in signings on Saturday, 11/19 from 5 PM and Sunday, 11/20 from 11 AM.

All attendees will also receive an exclusive limited edition set of X-Playing cards, used by the members of HIGH CARD in the anime.

TMS’s LUPIN THE 3rd panel and trivia contest will take place on Sunday, 11/20 at 11 AM in Panel Room 4 and will celebrate the franchise with announcements, news, and games. Giveaway prizes will include limited edition LUPIN THE 3rd bomber jackets, Magnetic Press’s “50 Years of Animated LUPIN THE 3rd” 50th-anniversary art books, and more!

The panel will feature a pre-recorded discussion with exclusive commentary from the English dub cast’s Richard Epcar (voice of Daisuke Jigen and English Dub director of the series) and Tony Oliver (voice of Lupin III), announcements and news of up-and-coming titles and merchandise releases, and a trivia quiz with giveaway prizes.

Japanese manga creator mega star Hajime Isayama will meet fans and media for the first time in North America this November at the upcoming Anime NYC festival. Isayama’s Attack on Titan is one of the most popular manga series of all time and has created a $500 million media empire spanning manga, anime, live-action movies, stage plays, video games, and merchandise.

“This is it – Hajime Isayama in his first U.S. appearance, and it’s going to be at Anime NYC,” said Alvin Lu, President & CEO of Kodansha USA Publishing. “After more than ten years of publishing Attack on Titan, we are very, very excited to help host Isayama-sensei and to see him meet the fans that have loved and supported this amazing pop-culture phenomenon throughout the years. This will be an Anime NYC to remember.”

“Attack on Titan changed the world,” said Anime NYC Event Director Peter Tatara. “It told a startling story unlike anything else in Japanese or American entertainment and led to a new generation falling in love with Japanese comics and dedicating their hearts to Isayama’s incredible characters. We’re now absolutely honored to play host to Hajime Isayama and give his American fans their very first opportunity to meet the legendary creator.”

Hajime Isayama will conduct a rare signing for fans on Friday, November 18 at Anime NYC, and he will then appear on Anime NYC’s Main Stage on Saturday, November 19 for a talk about his masterpiece. Details on tickets for his signing and the Main Stage session will be announced in early November. Kodansha will host a booth all three days of Anime NYC featuring a special Attack on Titan activation. Find them at Anime NYC at Booth #1530.

Hajime Isayama launched his Attack on Titan in 2009, and it concluded after 34 volumes in 2021. A dark and gripping tale of humanity in a war with grotesque giants known as Titans, Attack on Titan has been praised by fans and critics alike for its combination of intense action and horror together with political intrigue and intricate world-building.

The New York Times best-selling saga has sold over 100 million copies in print, and the series has won numerous awards across Japan and the US including the Kodansha Manga Award, Tezuka Osamu Cultural Prize, and Harvey Award. The anime based on this smash manga success will continue its final season in 2023.