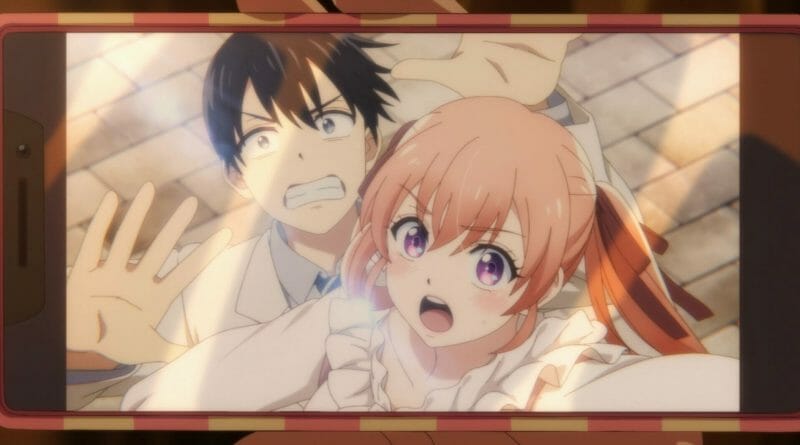 Erika Amano and Nagi Umino were swapped at birth. A fact that is seemingly unbeknownst to them up until now at age 16. Both second-year students in high school, Nagi is ready to finally meet his biological parents, but before doing so he decides to get some fresh air and go for a walk in a local park. This is where Nagi meets Erika Amano, who is in search of a fake boyfriend to convince her parents in dismissing the arranged marriage they have for her.

Due to weird circumstances, Nagi ends up getting caught in 4K and Erika blackmails him into submission to be her pretend boyfriend and help her get out of her arranged marriage. They spend enough time in the park getting to know each other and realizing how vastly different their lives are. She’s the popular pretty girl in school who has all the boys chasing after her, while Nagi is the intelligent scholar attending one of the most prestigious schools in Japan.

Though their time is cut short, and they each go their separate ways to meet their respective biological parents, Erika informs Nagi that she had a great time with him at the park even if they were just pretending to be boyfriend and girlfriend. Nagi arrives at the restaurant to meet his biological parents while things are seemingly going well, things take a drastic, unpredictable turn for both Erika and Nagi as they both learn that they were the babies who were switched at birth and that Nagi is the boy her parents arranged her in a marriage with.

It’s something I saw something coming a mile away, granted I didn’t see any actual trailers for A Couple of Cuckoos nor have I read the source material but it was kind of obvious from the start that Erika and Nagi were the ones switched at birth. Granted they are both shown as babies when the episode begins, again it was a given.

I’m interested in seeing how A Couple of Cuckoos plays out now that Nagi and Erika are engaged and are now joining their respective families together, it’s going to be very interesting to see how this all plays out now with how this huge, new family dynamic has been created. What’s even more interesting is the revelation that Nagi’s rival who he wants to beat academically, is a girl he also has feelings for. What kind of hijinks will ensue now that a potential love triangle will possibly form.

What kind of tension will this cause between Nagi and Erika, but also between their respective families who are simply joining together so their respective children arent faced with the ultimate decision of leaving one family and joining the other?

A Couple of Cuckoos is streaming now on Crunchyroll.

Want to discuss things further? Hit us up on Twitter, Facebook, or Instagram. And for more film, gaming, anime, and TV news, trailers, and updates make sure to keep it locked at The Nerdy Basement. While you’re here, please consider supporting us on Patreon! It’s an easy way of supporting us so we can keep providing you with your Nerdy News!