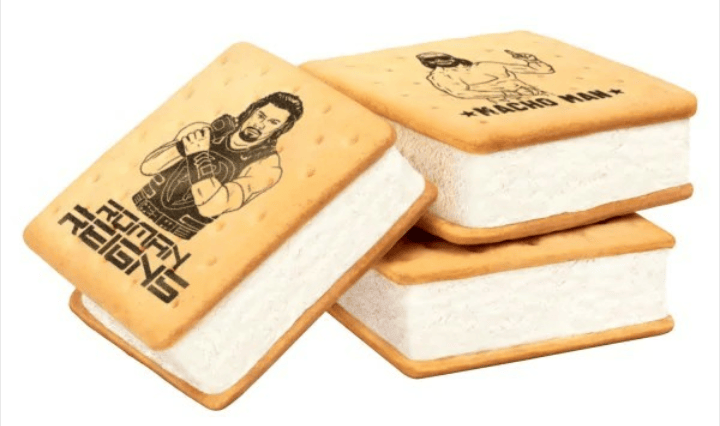 
World Wrestling Entertainment (WWE) and Good Humor are teaming up to bring back what fans have been waiting for nearly a decade: WWE ice cream bars!!!

The new WWE ice cream bars have officially been added to Good Humor’s website. Good Humor has been a household name for over 100 years as makers of classic ice cream bars and cookie sandwiches such as Candy Crunch, Chocolate Eclair, Strawberry Shortcake and Toasted Almond. However, compared to past ice cream bars, these do not have a stick or chocolate filling of sorts. This technically makes them ice cream sandwiches!

As you can see in the packaging and its description, WWE Superstars and Legends will adorn the bars. The packaging features Roman Reigns and “Macho Man” Randy Savage bars, while Savage, Becky Lynch and John Cena are showcased on the box.

For the uninitiated, the ice cream bars were first introduced way back in 1987. They even came packaged with a then-WWF trading card in the box. The bars were an instant hit among wrestling fans as they came decorated with images of superstars from the time. They became a popular snack bar until 2008, when the last line of the bars came out before being finally phased out and discontinued.

Fan interest in the WWE ice cream bars dates back to the Summer of 2011, when then-WWE Champion, CM Punk, threatened to walk away from the company with the championship belt unless Chairman Vince McMahon agreed to his demands for a new hefty contract. As one of his demands, Punk was asking for the return of the WWE ice cream bars, which he claimed was a fan of and enjoyed during his childhood. The saga was later added as part of The Summer Of Punk storyline that same year. Within that time, fans in attendance at live shows and tapings would show up with signs demanding the return of the bars!

No word yet on when the WWE Ice Cream Bars will be hitting local stores and supermarkets. However, they are expected to be available Spring 2020 ▪