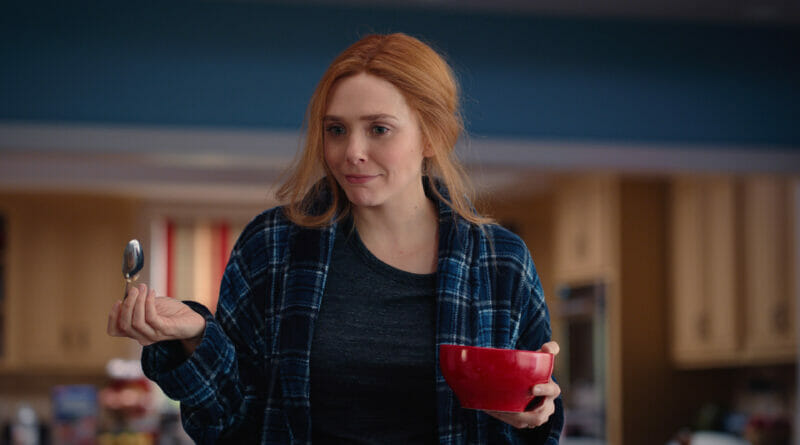 
*DISCLAIMER: THIS ARTICLE WILL CONTAIN HEAVY SPOILERS FOR THIS WEEK’S EPISODE OF WANDAVISION*

WandaVision is back again for another episode that will surely leave everyone watching with more questions than answers. While we got a handful of answers this week, this week’s episode of WandaVision served as both closing points and new starting points in order to further setup what’s to come in the next weeks and of course, Doctor Strange in the Multiverse of Madness.

After Vision’s near-death experience last week and “Pietro” unintentionally revealing that he really isn’t Wanda’s twin brother albeit through subtle verbiage. We are left to wonder even more about who is really putting the strings and pushing Wanda to create and maintain this Hex she has created. Well, we finally got some answers!

Agnes The Nosey Neighbor Is Finally Revealed To Be The Villainous Agatha Harkness!

What? You didn’t see that coming? … No, really, did you not see that coming? While we can all pretend to be shocked about Agnes now being confirmed to be Agatha Harkness. We can safely keep pointing the finger at the yet-to-be-seen Mephisto. All throughout this season of WandaVision, Agnes has been at the center of all of Wanda’s most important moments. We won’t list them all here, but if you’ve been watching WandaVision and reading our spoiler-filled recaps. You know that Agnes has been there when Wanda has needed her the most. Especially this week.

This week’s episode saw WandaVision’s take on the hit tv sitcom series The Modern Family. Based on the title of this episode alone, we were expecting our fair share of fourth-wall-breaking but not to the degree we got this week. Amidst her self-loathing and needing a moment to herself to really cope and digest what has been happening to her throughout this show. Wanda takes Agnes up on her offer to watch the kids so she can have the day to herself. More on this later…

Ever since her introduction, we’ve all known that Monica Rambeau would be a heavy hitter and overall a very important character in the MCU. Not just due to her comic book counterpart and MCU ties to Carol Danvers aka Captain Marvel. We knew that being introduced in WandaVision, Monica Rambeau would start her journey in gaining her Photon/Spectrum powers as she does in the comic books, while also being an important figurehead in SWORD.

This week we see Monica meet her aerospace engineer, or so we think since the title of said person was not mentioned and the person she met with was a woman and not a man. We’ll just assume that’s a much bigger surprise that’s being saved for later but if this indeed was the aerospace engineer Monica was referring to, well, what a letdown.

Either way, we see Monica attempting to get back into Westview and needing to break through Wanda’s hex in order to do so. But as we learned a few episodes ago, she needed a vehicle of some sort so she’s not further exposed to the hex’s CMBR, to avoid further damaging her cells, which have been affected at a molecular level.

After failing to get through the bubble with the vehicle, Monica takes matters into her own hands and pushes herself through the hex. It here that Monica’s powers awaken and protect her from changing to fit Westview’s reality that was created by Wanda. After a brief exchange of power with Wanda, Monica tries to use her trauma to empathize with Wanda and convince her that she [Monica] is on her side.

Enter Agatha Harkness and the Missing Twins, Billy and Tommy

As I mentioned above, in order to give Wanda a break and from further messing up reality, Auntie Agnes comes to the rescue. And once again comes to Wanda’s rescue when she’s having her exchange with Monica. As Agatha pulls Wanda away from the scuffle she brings her to her home. Wanda notices that the twins Billy and Tommy are nowhere to be seen in Agatha’s home. Agatha tells Wanda that the twins are probably playing in the basement and she heads down to the basement in search of them. Here is where the episode goes on full reveal mode.

It’s All Agatha, Not Wanda!

After successfully getting Wanda into the basement, alone at that. Agnes reveals herself to Wanda as Agatha Harkness and reveals to Wanda that she isn’t the only person in Westview with powers and she puts Wanda under a new spell. Through a series of highlights, we see that all of the events that have transpired so far in WandaVision have all been Agatha’s doing and not Wanda’s as Monica led us to believe after she was thrown out of Westview.

We get a nice look at Agatha using her powers on not only Wanda but also Herb; while also seeing her manipulating Wanda during the talent show. Most importantly, that it was her doing in bringing this fake Pietro to Wanda’s doorstep. The goal here was to get Wanda to create this reality, but why?

A Lot of questions have been answered this episode but we are still left with many more. Like who is Ralph? Is Ralph Mephisto? Is this fake Pietro played by Evan Peters the Grim Reaper or is he really Mephisto or even Ralph? We did not see “Pietro” throughout the entirety of this episode until the mid-credits scene.

Before we get to that, we have to backtrack to Vision and Darcy a bit. As she’s been brought out of Wanda’s mind control or in this case Agathat’s control and is now bringing Vision up to speed about his life before Wanda brought him back to life. His expression is rather…hilarious.

Pietro is not Pietro…So Who Is He?

For the first time ever, Marvel Studios has given us the first mid-credits stinger in an MCU television show. WandaVision has now been blessed with having that as a first, at least in the Feige MCU canon. After searching for Wanda, Monica makes her way to Agatha’s home in her search for Wanda. Stumbling at Agatha’s basement entrance, she is confronted by “Pietro”. “Snoopers will snoop,” he says as the final credits being to roll.

We don’t yet know who “Pietro” really is nor do we know what’s now happened to Billy and Tommy (probably chilling with Mephisto), Wanda, and now Monica. Hell, we don’t even know what’s the status of Darcy and Vision or what will happen when Vision comes home and doesn’t see his children or his wife there.

One thing’s for sure is that WandaVision has really up the ante and is now setting up the final pieces that will lay the groundwork for the Multiverse of Madness that is now being created by Agatha through Wanda.

WandaVision is streaming now on Disney+