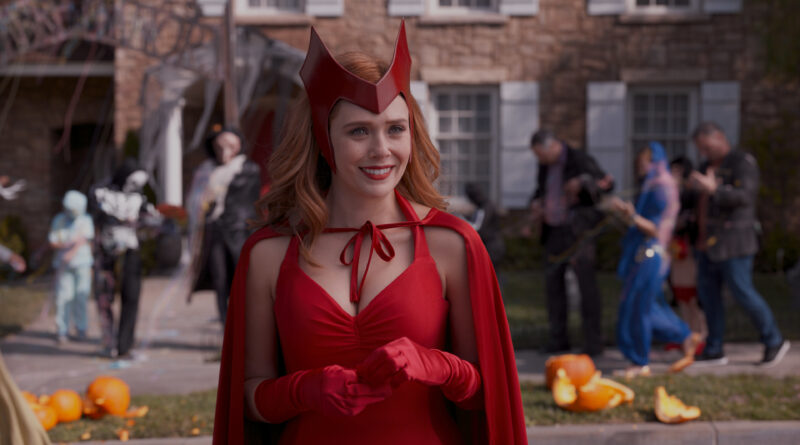 This week’s episode of WandaVision HEXPANDS to greater heights and more imminent threats! There’s no denying that WandaVision gets better and better each and every week. And as we near the series’ climax, more truths are starting to come to light as we start to narrow down who the big bad of this series really is?

Last week we saw the return of Pietro Maximoff, Wanda’s twin brother who is now being played by Evan Peters. Now we do not know if this is an actual recast or if Marvel is pulling a fast one and using Evan Peters for the sake of fan service to get the fans of his version of Quicksilver on board or if he’s being brought in for a much bigger role, like the common online theory, that Evan Peters is actually Mephisto and not Pietro.

Personal feelings aside, many many fans welcomed Peters’ return to the role of Pietro/Quicksilver with open arms. I, not so much. While this week he was a tad bit more enjoyable, he’s still obnoxiously annoying as he was in Fox’s X-Men Universe. I won’t get too deep with that, like I said, personal feelings will be set aside.

While there’s a lot to discuss when it comes to this episode, let’s focus on the major things and some of the subtle lines that hint at the series’s much bigger picture. This episode focuses on Halloween and set it in the 90s. This week’s opening song was full-on Malcolm in the Middle vibes, especially with the young twins wreaking havoc inside the Maximoff household. Billy was the true start of the opening moments of this episode as he breaks the fourth wall and starts speaking to the viewers directly about what’s going on between his parents, Wanda and Vision, and how Wanda has not been herself since their uncle Pietro came around.

We see that there’s still a bit of tension between Wanda and Vision as he informs her last-minute about his plans to not spend Halloween with his family; while also telling Wanda to behave since he won’t be around. Pietro tries to ease the tension between them trying to serve as comedic relief but it doesn’t really go that well. And to be honest, not all of the quips that come out of Pietro’s mouth are really that funny.

One of the big notable things about this episode is those 1:1 moments between Wanda and Pietro (mostly Wanda). As they both start to recall their childhood memories, each of them starts remembering them in different ways. One of them being their childhood memories when they went trick-or-treating, another being when Wanda asks Pietro about their time in the orphanage and one kid was always trying to steal Pietro’s boots. Instead of saying that he and she remember that moment differently, he immediately tells Wanda that she is trying to test him; and rightfully so.

He even mentions how he understands if she’s trying to test him because he appears out of nowhere after all this time of being dead and now he looks different etc, which are all questions we have been asking ourselves as we watch these events unfold each and every week. It seems like Wanda is playing along just to keep up the charade, but is subtly trying to figure things out as they along and one way of doing that is by asking these kinds of questions.

The big takeaway here that directly points to Evan Peters not being Pietro entirely is when he sends Billy and Tommy trick-or-treating, he yells “unleash hell, demon spawn”. This is a direct reference to Mephisto and could potentially be the direct confirmation that Peters is indeed Mephisto and not Pietro.

In the comics, Billy and Tommy are created from Mephisto’s life essence. All in part of a deal that Wanda made with the devil, the devil himself being Mephisto. Mephisto eventually comes back for what’s his and commotion ensues. This could also be why “Pietro” is so keen on spending time with the kids and being the “cool uncle” so the twins can grow fond of him. Something Wanda notices but as I mentioned above, she just seems to be playing along all while trying to put the pieces of this puzzle together.

Before Pietro speeds off with the twins to ramp up their count on candy while also wreaking havoc through the cul-de-sac, we get a cool Kick-Ass reference. This a nod to both Evan Peters and Aaron Taylor-Johnson’s roles in the comic book film Kick-Ass. Another questionable moment regarding Pietro is when Wanda tells him that she can’t believe how much of a bad influence he really is. Speaking from a characteristic standpoint she is right. This version of Pietro is not like the MCU’s version of Pietro, who’s more serious and more about keeping things in line with his twin sister.

Here Wanda asks Pietro about his Sokivian accent, he throws her off by asking her the same question. More deflection from Pietro rather than giving answers. Logical answers at least. Despite that, he tells her that he’s just playing his part, now that can be easily be taken out of context if he stopped talking right there but he makes a callback to the MCU’s version of Pietro being “shot up on some street” and tells Wanda that while the details are fuzzy (quite literally) he heard her call out to him so he came to be there for her cause he knew she needed him.

But that’s where things get a little muddy because in last week’s episode she didn’t call out to him. Not even mentally. Prior to his appearance at their doorstep, Wanda tells Vision she didn’t call anyone over. Statistically throughout the season so far, Wanda has had the habit of calling Agnes over at the most inconvenient moments in order to distract anyone who’s questioning this reality she has created. Vision being fully aware of that, and with Pietro showing up while they’re having a disagreement, she had to reassure Vision that it wasn’t her doing at that point in time. So who called him?

To spend a little more time on the Wanda/Pietro interactions, I want to jump ahead to their last interaction and one of, if not, the most important one this entire episode. Pietro starts asking the real questions while in a sarcastic, but praiseful kind of way. One of the biggest questions this season was the line “for the children” which has been a plot point for the series since episode two. We all assumed that it meant for the twins Billy and Tommy and that could very still be the case, but as Vision mentioned last week, why are there no other children in Westview?

While Wanda stumbles to answer the question, Pietro is amused by the fact that Wanda was able to pull this off without really screwing things up (even though she has) and also praised the fact that she’s leveled up from giving people “nightmares” a reference to Avengers: Age of Ultron. But we finally get some sort of answer from her as to how she created this bubble around Westview casting this hex and essentially hosting everyone in Westview hostage against their will.

Wanda tells Pietro that all she remembers is feeling alone and empty. Falling into a sort of depression due to her not fully coping with Vision dying twice but also dying herself due to Thanos’ snap to then come back and realize that she is all alone still. But how she ended up creating this reality while simultaneously affecting the real world has yet to revealed and that’s all due to Wanda seeing a dead version of this Pietro to halt the conversation.

I have to fully mention or dive into Vision’s arc in this specific episode and how throughout his investigation of Westview he learns more about what Wanda has done to the people of Westview, while also learning about The Avengers and ultimately, being informed by Agnes no less, that he isn’t really alive. Vision proceeds to breach the bubble and is immediately surrounded by SWORD. We see Vision in pain and start dematerializing as Wanda’s hex bubble tries its best to prevent him from fully getting out.

As Vision continues dematerializing, Darcy steps in to help but is apprehended by SWORD and in the midst of his callout for help, Billy’s powers awaken and he hears Vision’s call and informs his mother about what’s happening. Here is when “Pietro” gives us the most suspicious line of them all, “hey, don’t sweat it sis. It’s not like your dead husband can die twice”.

This obviously triggers Wanda for obvious reasons. But the most important detail here is, how did this version of Pietro know that Vision is dead and has already died? The REAL Pietro wouldn’t know this information even if he was brought back from the dead. A clear indication that Evan Peters’ Pietro isn’t who he claims he is.

Throughout this episode, we learn more and more about Director Hayward and how he is keeping strict tabs on Vision. While what he wants with Vision has not been made clear, it is clear based on his actions that his only reason for wanting to take out Wanda is because she’s the only one who is willing to defend and protect Vision. This also makes us question the other Avengers and their whereabouts and priorities for not protecting a fellow Avenger post-mortem.

As for Wanda, she has to give Billy otherwise known as Wiccan, who just like Tommy, has now unlocked his powers, a quick course on how to pinpoint Vision telepathically. Once Wanda learns about Vision being surrounded by soldiers the stops everything and expands her hex. And in the process captures and alters reality as the hex bubble expands, and also absorbing Darcy in the process.

We don’t know what kind of after effects this course of action will have on the SWORD agents who were absorbed inside, Darcy included. But what we do know, is that the time Monica has spent inside the bubble has changed her drastically and going back inside can affect her even more. Monica also mentions her aerospace engineer which was set to arrive within the hour and she also confirms it is a male aerospace engineer so could it actually be Blue Marvel?