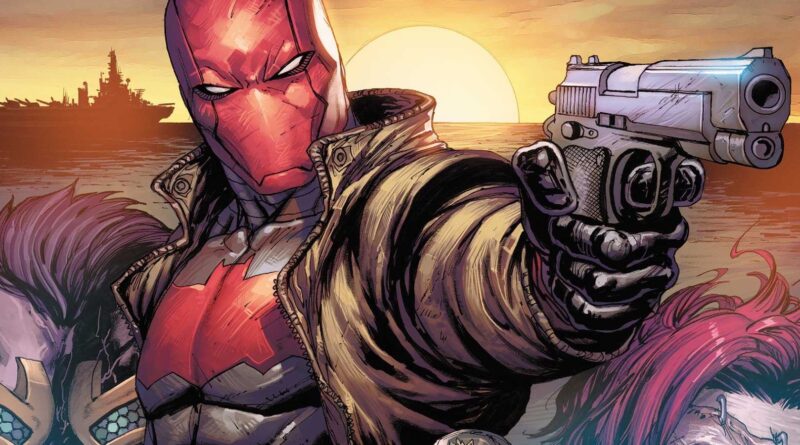 Titans Season 3 has recently gone into production and official behind the scenes images were being released to get fans excited for the upcoming season. This past Summer during DC FanDome, we got the news that Jason Todd will officially take on his Red Hood anti-hero moniker after his fallout with the Titans in Titans Season 2.

Over the past weekend, Titans released a short teaser video to get fans hyped for a new announcement that was set to be made today. Many fans like us, speculated that we would get our very first teaser trailer for the series (we were wrong!) but instead we got our first official look at Curran Walter’s Jason Todd as the Red Hood.

Alongside the official costume reveal, we got an official piece of concept art to coincide with the reveal. Both are simply amazing. Titans Season 1 and Season 2 both set up Jason Todd to become Red Hood at some point down the line of the series’ lifeline. That turn has come sooner rather than later but it is evident that Jason Todd will be a central focus of this new season.

Unfortunately, the origins in which he becomes Red Hood have been altered from how Jason Todd becomes Red Hood in the comics. Alas there is no Joker in this Titans universe to kill off Jason Todd thus paving the way for him to take up on the Red Hood moniker once held by Joker himself. But there’s also no Batman (technically) to really go up against for not avenging his “death”. Things will be heavily different from his comic book counterpart but for the most part, Walter’s has been able to thoroughly capture the essence of what is Jason Todd and his bad boy side in Red Hood.

As for the costume itself, its fairly accurate to his original comic book costume, while implementing aspects from the Jason Todd/Red Hood seen in Rocksteady’s Batman: Arkham Knight. Hence the reasoning he is wearing an actual red hood. Needless to say, that fans are and will be thoroughly excited for Red Hood’s first-ever live-action debut.

One foreboding question that lingers is whether or not the upcoming season will deliver a thoroughly entertaining season. Both initial seasons of Titans have garnished rather mixed, but mostly negative reviews from fans and critics alike. How the showrunners present Jason Todd and the rest of the Titans in Gotham City, alongside Barbara Gordon and Scarecrow remains to be seen.