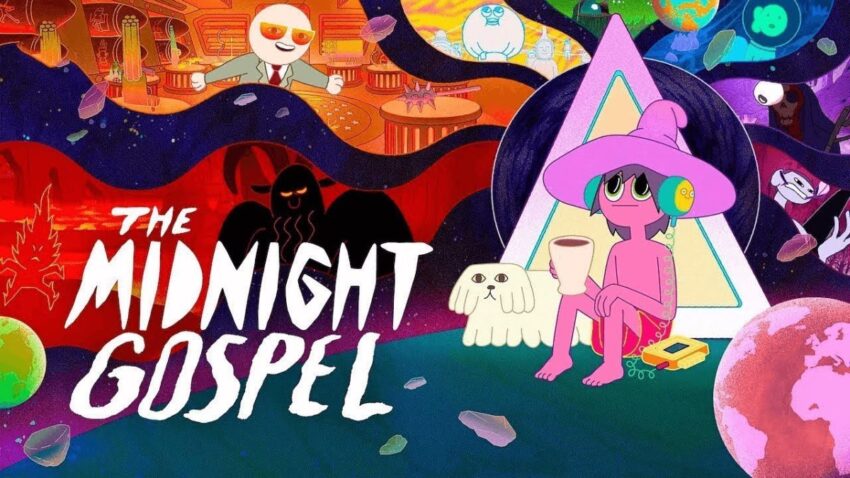 THE MIDNIGHT GOSPEL S1: Preaching Out of World Messages

One of the great things about streaming services is that creators can experiment with their content, creating shows that you rarely see on TV. “The Midnight Gospel” is a prime example of this.

The Midnight Gospel was released on April 20, 2020, and created by Pendleton Ward (creator of “Adventure Time”) and comedian Duncan Trussell, the show is definitely a one-of-a-kind product. Based on Trussell’s podcast, “The Duncan Trussell Family Hour,” the show may be overwhelming to the average viewer at first, due to its kaleidoscopic aesthetic and zany narratives. However, once one sets that aside, the show has a lot to say, discussing different topics in profound ways to create conversations that are powerful, even if they are not for the faint-of-heart.

The show focuses on the misadventures of Clancy, a “spacecaster” who has the technology to travel to various dimensions. With every episode, Clancy travels to a different planet with absurd circumstances on each planet, whether it be a zombie apocalypse, an aptly named “Clown World,” or something else entirely. On each planet, he interviews one of the inhabitants on subjects of different importance, while experiencing the worlds he is on. No matter where Clancy goes, he is determined to get enough material for his space cast, making every episode one to remember.

The show itself has a very experimental art style, with vibrant colors and absurdist proportions and creatures taking up most of the screentime. Although the show’s designs can be very off-putting at first, they set the show apart from other modern adult-oriented cartoons and make it memorable for anyone who tries the show out.

Every episode sets itself apart from the others in regards to the worlds Clancy visits, but they also set themselves apart with the dialogue of each creature Clancy interviews. A new guest voice actor joins Clancy in every episode, and in turn, different topics are discussed. The subject matters brought in can be very mature, such as drugs and their legality, accepting death, religion, and self-growth being some of the subjects brought up.

The insane circumstances Clancy finds himself in each episode often relate to the topics at hand, allowing for moments of hilarity when circumstances allow for comedic moments. This leads to the show being profound with the podcast-like format of how the dialogue is delivered, while also being funny thanks to the activities happening around the interviews.

However, this absurdist take on a “visual podcast” can lead to the two main aspects of the show clashing. The conversations can feel very serious at times, making the viewer want to sit down and think over what they have just heard. When such moments are followed up by a new moment of adult humor, it can occasionally cause tonal dissonance. This often happens when the dialogue changes from the interview itself to the events happening in the show, which can vary in terms of obscenity. Although these moments may exist to try and provide levity, they instead feel jarring and break one’s immersion from what the show has to say.

Despite its imperfections, “The Midnight Gospel” is a show that is definitely worth checking out. It is as absurd as one can expect from the creator of “Adventure Time,” but it has a feeling of profoundness in what its characters have to say. Although it can be jarring to follow sometimes thanks to its absurdities, there is a lot of potential for this show to explore a lot of powerful topics in its future. The show is one-of-a-kind, and if anything else, it must be watched just for that. Profound and absurd, “The Midnight Gospel” delivers its messages with as much heart as it can.

For more news, reviews, and updates on the latest films, make sure to keep it locked right here at The Nerdy Basement.

"The Midnight Gospel" may be too absurd for its own good at times, but it otherwise does a good job maintaining an eccentric environment with its profound messages.

Aaron AcevedoApril 27, 2020"The Midnight Gospel" may be too absurd for its own good at times, but it otherwise does a good job maintaining an eccentric environment with its profound messages.7.0110
Your RatingUser Rating: 0 ( 0 Votes )
Share