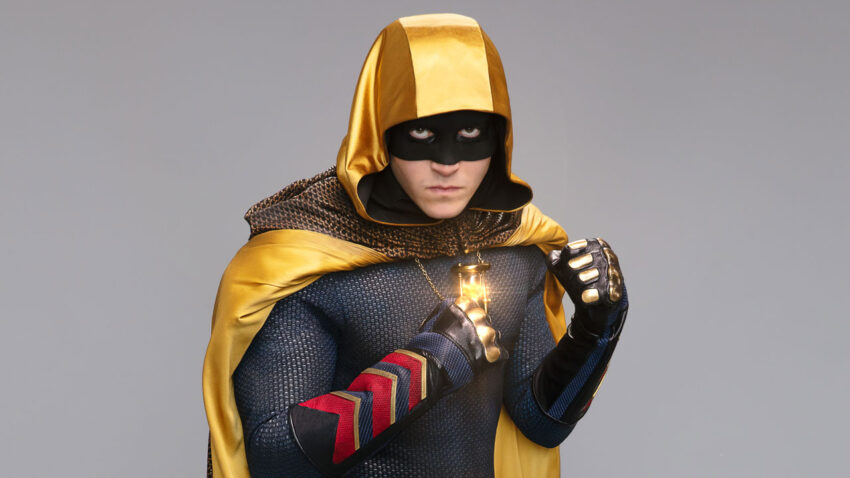 Last week Stargirl introduced us to Wildcat, this week Stargirl picks up the pace with a stellar introduction to our new Hourman and Dr. Mid-Nite.

Last week Stargirl recruited her first Justice Society of America member Yolanda Montez aka Wildcat. While that episode was mostly hit or miss, this week’s episode introduced us to our new Hourman and Dr. Mid-Nite. Faired out solidly and is already one of the best episodes this season.

The episodes starts out with a quick origin for Rick Tyler and a deadly final moment for Rick Tyler’s parents and the original Hourman who meet their demise at the hands of Solomon Grundy. But in order to keep Rick safe and out of the harm of the Injustice Society. A new identity, along with falsified documentation is forged and Rick is forced to be kept under the guard and care of his uncle.

As the episode progresses we see how much the death of Rick’s parents has hurt him as well as being under the care of his uncle. All of that has lead him astray with no real way to properly cope and deal with his grievances. Especially with an uncle who has become resentful of him after all these years. On his way to school, Rick comes across Courtney and Pat who are stranded because Pat’s car has stalled and at that moment no longer functioning.

Pat and Rick exchange a few words and after describing to Pat the car he has been working on. Pat becomes a bit curious as to who this kid really is. As we all know, Pat has worked alongside the Justice Society and he knows that yellow ’66 Mustang all too well. To make matters even more interesting, Hourman’s hourglass starts reacting to Rick’s presence but after being chased down by Courtney and her explaining to Rick who he is and what her interest with him and Hourman’s hourglass, she is dismissed and left alone.

Back at home, Beth Chapel is waiting for Courtney to return home. As we saw at the end of last week’s episode, Beth saw Stargirl and Wildcat in action outside of the hospital, as she was there visiting her mother who is a doctor working in the very same hospital IJS member Brainwave is currently at. While at Courtney’s house, Beth comes across the family dog who is chewing on Dr. Mid-Nite’s goggles. And as she makes her way to Courtney’s room, Beth uses the goggles to learn more about Dr. Mid-Nite, Courtney’s secret identity, and the Justice Society of America.

There’s also a name drop of the DC superhero the Red Bee a former member of the JSA who was killed due to a rookie superhero mistake in which the hero’s real name was called out during a mission and thus eventually getting him killed. This goes back to last week’s episode and how Beth was able to learn about Stargirl and Wildcat’s identity due to Stargirl calling Wildcat by her real name as opposed to her new moniker.

We also get another reference to The Fiddler, another member of the Injustice Society. While The Fiddler in the comics has always been a male, we are not yet sure if the school’s principal, in this Stargirl universe is the original Fiddler and/or when her son might become The Fiddler himself. Just like Cindy Burman’s villainous alter-ego is still up in the air.

At Cindy’s Halloween party, the newly formed JSA attempt to recruit Rick Tyler once again. After finally convincing him that his dad was actually the superhero known as Hourman, he accepts the hourglass. After learning how to use it, he immediately goes on a quest for revenge and goes after his uncle. Unfortunately, we haven’t really seen much of their relationship and why they despise each other so much but it is safe to assume that Rick’s childhood has been hell due to being raised by uncle after his parents’ death.

While all of this is going down, the Injustice Society is brewing in the background and the lives of three men have been taken. Stargirl, Wildcat, and later on Beth Chapel once again cross paths with Rick Tyler to once again convince him to become Hourman and live up to his father’s legacy. Stargirl empathizes with his pain by revealing that her father was Starman and he was also killed by the Injustice Society. Still in disbelief of himself and reveling in that pain and anger he’s felt for the entirety of his life up until this point.

Beth Chapel appears and with the use of Dr. Mid-Nite’s goggles displays a holographic replay of the night Hourman (Rex Tyler) and his wife died. While the authorities falsified reports claiming that their death was due to a faulty tire which caused them to crash into a tree and die. The goggles reveal that Rick’s parents were killed by the Injustice Society, more specifically, killed by Solomon Grundy. This finally prompts Rick to take on the mantle of Hourman to maintain his father’s legacy.

Back at Pat’s car shop, he is presented with a damaged truck presumed to be in an accident. He realizes that something like King Kong has damaged this truck. Back at home, he goes up to Courtney’s room where he discovers the Green Lantern battery due to its surging power. He then realizes that Courtney is still going against his will and is out recruiting new JSA members to combat the Injustice Society.

The big set up here is that at some point we will eventually see a Green Lantern in this show. Who will be this new Lantern remains to be seen but the Green Lantern Power Battery she is in possession of belongs to Alan Scott. While no ring has been seen, it also begs to question, has the Green Lantern ring has already chosen its new wielder now that the battery has started to surge.

Overall this episode was a solid one, and in my personal opinion, as solid as episode three of the series. Giving us solid origins and introductions to two new members of the Justice Society of America while also setting up the much bigger threat and a much bigger introduction to a new potential Emerald Knight down the line.

For more on Stargirl and television news, reviews and updates make sure to keep it locked right here at The Nerdy Basement. Also, feel free to support us on Patreon and listen to our podcast below!

Solid origin and introduction to two new iterations of longtime members of the Justice Society of America.