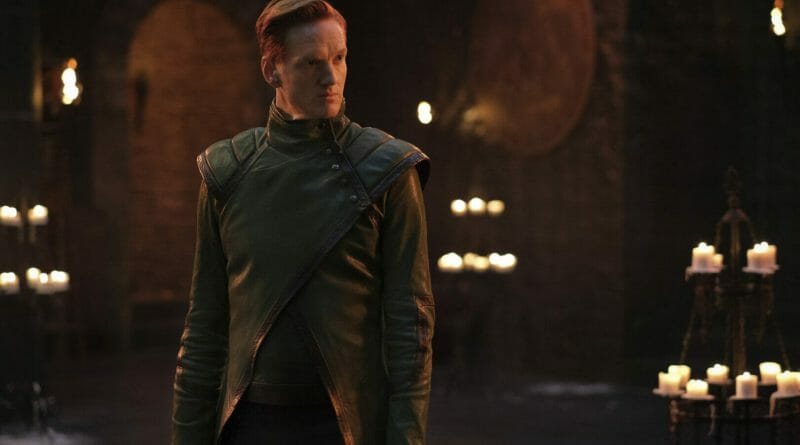 
Stargirl’s penultimate episode has arrived and has set the stage for the ultimate showdown between the Justice Society of America and the Injustice Society.

As Dr. Ito (The Dragon King), Brainwave and Icicle ready their plans to take over the minds of at least half the nation, Sportsmaster and Tigress are back on the hunt for Stargirl and Pat Dugan. After a brief, but annoying exchange between Pat and his son Mikey, Pat is attacked by Sportsmaster; while Court and Barbara are attacked by Tigress.

As with previous episodes the action sequences are thoroughly choreographed. Especially with Court and her use of the Cosmic Staff, something I have some to overly enjoy as the season progressed. There’s two touching and in my opinion very important moments between Barbara and Court, and Pat and his son Mikey. As they both assist their respective child in defeating the villain. In Pat’s situation, Mikey is the one who does the saving which ultimately leads to Pat getting the upper hand on Sportsmaster as he tries to attack Mikey.

For Court and her mother, backtracking to last week’s episode where Barbara discovers that Courtney is Stargirl and has been running around Blue Valley as a vigilante with her high school class mates. She was very dismissive of the fact and wanted Court to stop being Stargirl.

During this encounter with Tigress, seeing Court in action and doing all in her power to stop Tigress, you see Barbara’s perspective change even more than it did by the end of last week’s episode after seeing Court doing all she can to save her. It was a subtle but strong reaction from Barbara and that will go a long way for the family entirely which we see towards the end of this episode.

As the ISA finalizes their plans and commences their massive brainwave surge dubbed the New Constitution, the JSA and company gather together in an attempt to get ahead of the curve and stop the ISA from fully launching Brainwave’s attack. Unfortunately, for them, they are intercepted by the Gambler who has hacked into Dr. Midnite’s goggles and foiled their plans. In the process, both Barbara and Pat have been mentally taken over by Brainwave.

One thing I did enjoy is that Beth was very very useful in this episode. If you’ve kept up with my reviews and more so my thoughts on Beth on our podcast, then you’ll know that I’ve been displeased with how Beth has been utilized this season so far.

I understand they’re all rookie superheroes and they call be a little clumsy at times which is totally fine, but I know for sure that Beth can be more than just the clumsy, panicky, ‘I don’t know what to do on the field” kind of superhero. So to see her in this episode infiltrate the ISA, find out their plans and lead the JSA to the tunnels was very pleasing to me. So I’m still holding out hope that she eventually becomes more than just the woman in the chair, I also wanna see her on the field kicking ass.

We do meet the demise of the female version of The Fiddler at the hands of Tigress. We also meet her son, who I can only presume will become the new Fiddler. Whether or not that exchange of mantles happens in the season finale or the second season remains to be seen. We are also waiting for the debut of Jakeem Thunder. The series has built up expectations of his debut but has yet to pay that off, as well as the appearance of Green Lantern Alan Scott.

Next week is the season finale of Stargirl and I can only hope we get the two cameos we have been waiting all season for. Overall, the series itself has been great and this episode gets us all more than ready for the season finale and the inevitable showdown between the JSA and the ISA. Who will come out victorious? Let us know!