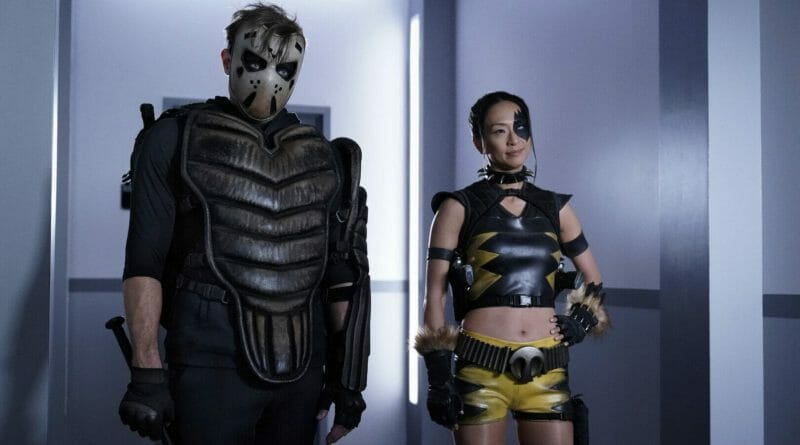 Right off the bat, I wanna go ahead and say that this is hands down the best episode of the series so far, now that we have reached the halfway point of this first season. To quickly backtrack, last week’s episode saw the Rick Tyler take up the mantle of Hourman, in order to maintain his father’s legacy; he was the former Hourman. We also saw Beth Chapel partially take up the mantle of Dr. Mid-Nite in which she fully takes up in this episode.

As with the majority of the season so far, we resume wit Pat trying to convince Courtney to get out of the superhero gig especially after he discovers that she has been secretly recruiting her fellow school mates to become new JSA members. Moreso after Pat discovers the Green Lantern battery surging and pulsating with energy. Something he mentions to Courtney, while also explaining to her that the battery its extremely dangerous without its ring and the ring’s wielder.

Now the first half of the episode is mostly forgettable despite the tension that’s being built between the team as Courtney tries to get everyone on the JSA to give back their costumes. This causes further tension between Rick and Pat during their small exchange.

I’m still waiting for Beth Chapel to grow on me a bit. I’m being patient cause I don’t want to entirely dismiss the character as of yet. While she did partially help during this episode’s massive fight, more specifically during the Wildcat vs Tigress fight, she was more of a tag-along than a helpful member of the JSA.

Insert Tigress and Sportsmaster and what has been so far at least the most epic fight in this season so far. While I personally feel Sportsmaster got more of the limelight as opposed to Tigress, both of them brought it and their respective battles with the members of the JSA were great and masterfully choreographed. The great thing about these fights especially when Sportsmaster was involved where the high impact of the fight scenes. Very comic book-y, very awesome, absolute perfection IMO!

Even more so when we got Tigress and Sportsmaster vs Stargirl in an epic 2-on-1 battle. Despite her “losing” the battle, seeing the new JSA assemble alongside S.T.R.I.P.E., it was a scene to behold and the buildup to this very moment was well worth the wait.

As the Injustice Society starts to unravel and further achieve their goals. They are now plotting a way to stop and potentially destroy/kill the new Justice Society of America, despite killing the original team back in the pilot. One of the biggest questions I still have is whether or not we will get a younger version of the ISA this season or next season if we even get one.

I say this because we have Icicle’s son who’s potentially capable of the same powers his father has as well as Brainwave’s son. Not to mention The Fiddler’s son and additionally, Artemis Crock, the daughter of Sportsmaster and Tigress. For those who don’t know, Artemis Crock is mostly known as the archer Artemis, sidekick to the Green Arrow. Prior to becoming a superhero she was a villain and went by the codename Tigress as well.

So it seems like the seeds are being planted for the children of these villains to eventually become their comic book counterpart. If so, then we are in for some massive epicness this season or in the future of this series if this first season fairs out well.

For more on Stargirl, film and tv news, trailers and updates, make sure to keep it locked right here at The Nerdy Basement. And while you’re here, please consider supporting us on Patreon. It’s an easy way of supporting us so we can keep proving you with your Nerdy News!