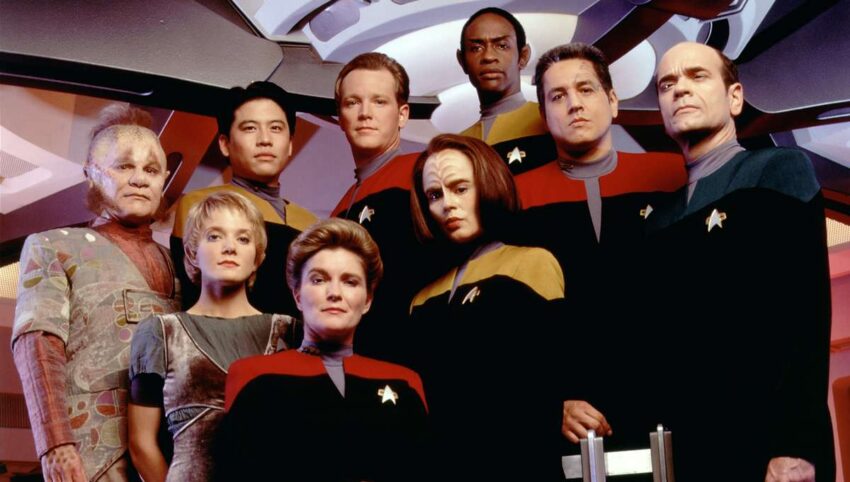 STAR TREK: VOYAGER” WILL CELEBRATE 25TH ANNIVERSARY WITH CAST REUNION ON “STARS IN THE HOUSE” Seth Rudetsky and James Wesley to Co-Host May 26th At 8 PM ET in Support of The Actors Fund

Yesterday, we reported that the cast of The CW’s The Flash would be gathering with Stars in the House hosts Seth Rudetsky and James Wesley. Today, we have learned that Seth Rudetsky and James Wesley will be hosting the 25th anniversary of Star Trek: Voyager with its entire cast. The event will go down virtually of course on May 26th at 8 pm ET. For full details, check out the official press release below.

Seth Rudetsky and James Wesley announced today that the cast of “Star Trek: Voyager” will reunite LIVE on “Stars In The House” on Tuesday, May 26th at 8 PM ET on the Stars In The House YouTube channel and on starsinthehouse.com. Kate Mulgrew (Kathryn Janeway), Jeri Ryan (Seven of Nine), Roxann Dawson (B’Elanna Torres), Robert Beltran (Chakotay), Robert Duncan McNeill (Tim Paris), Robert Picardo (The Doctor), Ethan Phillips (Neelix), and Garrett Wang (Harry Kim) are coming together to celebrate the show’s 25th anniversary and to support The Actors Fund.

Fans tuning in will be able to interact with the Voyager crew in real-time as they recall favorite memories of their journey from the Delta Quadrant, and can donate to The Actors Fund for the chance to have their names read on air. And of course, like all episodes of “Stars in the House” – there will be LIVE music!

“This reunion will be both gratifying and novel: we are all alive, we are all congenial, and we are all still actors!” said Kate Mulgrew.

“I am delighted that the entire cast of ‘Star Trek: Voyager’ will beam in for a 25th Anniversary Reunion panel on Stars in the House to benefit The Actors Fund,” said Robert Picardo. “Hope you’ll join us Tuesday, May 26th at 8 PM ET and support this important cause with a donation at the moment in time it will mean the most.”

“Star Trek: Voyager” joins the incredible lineup of casts that Seth and James have brought together to sing, share stories, and raise funds to help entertainment professionals in need during the COVID-19 pandemic; including current TV favorites “One Day At A Time,” “The Flash,” “Barry,” “Young Sheldon,” and “This Is Us;” along with reunions featuring the casts of “Melrose Place,” “White Collar,” “SMASH,”  “Frasier,” “Glee,” “Desperate Housewives,” “SCTV,” “Difficult People,” “Taxi,” and more. Celebrity guests like Jason Alexander, Sean Hayes, Chita Rivera, Kristin Chenoweth, Tina Fey and Jeff Richmond, Jeremy Jordan, Randy Rainbow, Judith Light, Audra McDonald and Will Swenson, Peyton List, Patrick Wilson, Billy Porter and Annette Bening are just some of the stars who have joined since the first show on March 16th.

And often Seth and James remind their guests how important it is to keep in touch with loved ones during this social distancing and suddenly a surprise guest will pop up like Jon Hamm, Erik McCormack, John Lithgow, Bernadette Peters, Patti LuPone, Jessie Mueller, Iain Armitage, Rosie O’Donnell, and Andrew Lloyd Webber!

As the creators and executive producers of “Stars In The House,” Seth and James bring a masterful combination of music, storytelling and community to each episode, ensuring that the show goes on in viewers’ homes even while performance venues across the world are closed.

“Stars In The House” airs new episodes daily at 2 PM and 8 PM on its YouTube channel and starsinthehouse.com. For more information and to see upcoming guests, please visit starsinthehouse.com and follow @StarsInTheHouse, Seth (@SethRudetsky), and James (@JamesWesleyNYC) on Twitter and Instagram.

For more news, updates, trailers, and more make sure to keep it locked right here at The Nerdy Basement.