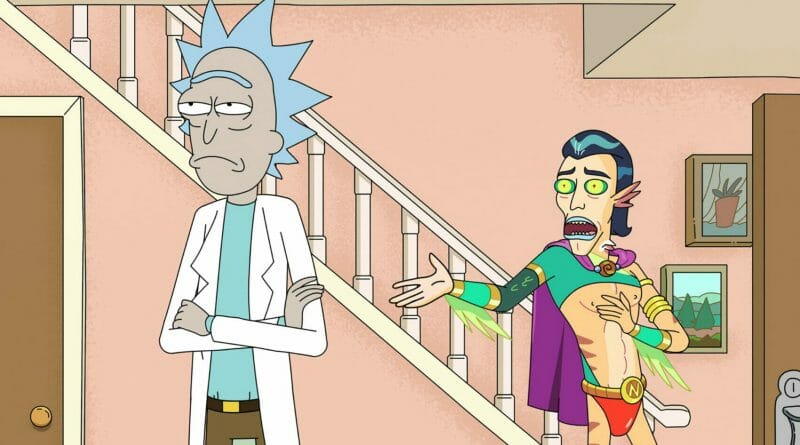 
**Spoilers Ahead For Rick and Morty Season 5, Episode 1**

Rick and Morty Season 5 gives fans a refreshing feeling from early seasons and adds something new for them to enjoy. The episode starts off with Morty saving himself and Rick by jumping into their spaceship last second and flying away. Upon return to Earth, it is clear that the ship is barely holding together and will certainly crash. With Rick unconscious, Morty feels he will die in the coming moments so he decides to call his longtime crush Jessica. He tells her how he feels and the two finally arrange a date while the ship is crashing.

Morty realizes he cannot accept dying now that his future is looking bright. Morty was able to bring the ship up just before it crashes headfirst into the ocean saving him and Rick. Rick wakes up and realizes Morty has crashed into the worst place possible for him…the ocean. The ocean is the one part of Earth Rick is not allowed to go because of an agreement between him and his nemesis, Mr.Nimbus. Mr. Nimbus can be described as a sexual Aquaman. He is able to control the ocean and also the police just from a pelvic thrust. Because Rick touched the Earth’s ocean, Mr. Nimbus is now allowed to wage war on the surface world.

Rick instead invites him over to the house in hopes to renegotiate another contract. The viewer then gets to see what Jerry and Beth have been up to since Season 4 and they let everyone know that they are sexually positive and have been very romantic recently. Summer has been tasked by Rick to go to Atlantis, the home of Mr.Nimbus, and get rid of the shell that gives Nimbus his powers. Morty was tasked with the most interesting task of all and that was getting the wine.

Rick wanted the wine to be nice and aged so he put the wine in another dimension where time moves much faster. While all this was being explained to Morty he was too busy mentally preparing for his date with Jessica who is also going to be coming over to the house. Once Jessica and Mr. Nimbus arrive they both want some wine so Morty fetches it for them in the other dimension. When Morty grabs some of the wine from the other dimension a married man asks if he wants some help, Morty happily agrees.

Once the man sets down the wine in the Smiths house he returns home only to realize he missed the birth of his son and the death of his wife. His teenage son is angry with the father for leaving them for so long and kills the father. The son dedicates the rest of his life to killing the boy who took the father from them. Every time Morty returns to grab wine he is greeted by a new generation of people sworn to kill him who he must fight off just to grab some wine.

Morty’s storyline was by far the best story of the show and the main one as well. Although Rick and Morty have a diehard fan base, it seemed as though season four as a whole was not as creative as previous. This story with Morty was very exciting as viewers watched a whole civilization develop hell-bent on killing Morty who was seen as a mythical creature. This all happened just because a man helped Morty carry some wine through a portal just for a few seconds.

This story was very impressive and gave fans the familiar Rick and Morty creativeness. Something that was also interesting was the best and funniest story was one of just Morty. The show has a running joke that Morty’s adventures are nothing without a Rick but this episode showed that Morty can be just as interesting and funny alone. This was something fans have not seen much of at all in the past but maybe will see more of in the future.

The episode ends with Jessica being trapped in the other dimension after a soldier from the civilization is sent through a portal to kill Morty and ends up teleporting Jessica. Morty goes back to the dimension to save her only to realize she has been frozen in time. He ends up needing the help of Grandpa Rick. Because this civilization has advanced to such a state, Rick’s weapons are ineffective. Cornered by soldiers Rick, Morty and Jessica are hopeless. Until Rick’s nemesis, Mr. Nimbus saves them with a giant wave from the ocean claiming that he is the only one that is allowed to defeat Rick.

Once they return to the house Mr.Nimbus and Rick agree that they were once friends and they can be again. After they agree Summer returns from her mission with the shell that controls Nimbus’s powers. Once he sees this he proceeds to beat the crap out of Rick. Summer could have not had worse timing. Morty then asks Jessica if they could just try their date again in the near future. Jessica says no. While she was frozen physically in the other dimension she was not mentally. She watched days go by for who knows how long. She said she perceives time differently. It was clear that the time in the other dimension messed with her head severely.

Overall this episode was a great start to the new season. It gave fans a familiar feeling and they got to see the best of their favorite characters. Although we could have had more Summer, she will definitely have her moments in the future. Fans also got shown that Morty doesn’t need Rick for a compelling story. Rick and Morty is back and as strong as ever.