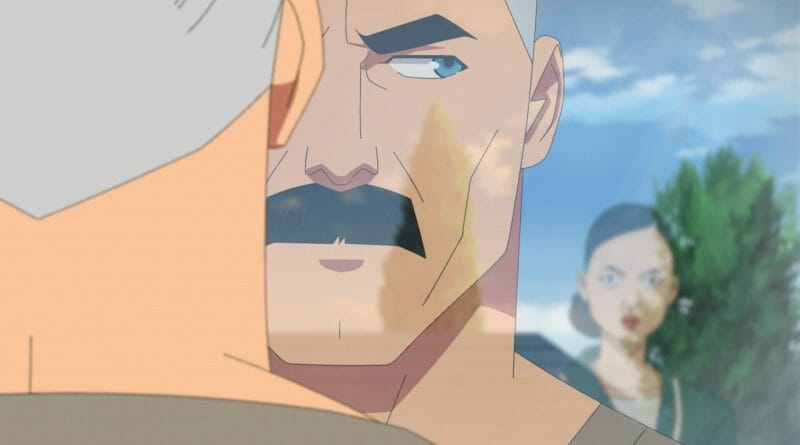 
Invincible’s penultimate episode is jam-packed with tension, and the dramatic irony, employed since the beginning of the series when Omni-man killed the Guardians of the Globe, is finally coming to a head.

Invincible has had a few ups and downs for a generally quite strong show; it occasionally can feel overlong and it’s nice to see the show amp back up again for its seventh episode, playing on its strengths of high tension and high stakes action. We have come to the point that comic fans have been yearning for and that newcomers have been expecting, the ultimate confrontation between Invincible and Omni-man.

There is always a lot going on in episodes of Invincible, and this one is no different. Robot’s story has been one of the more interesting subplots, essentially transforming what is known of him three different times. Knowing him like an automaton, a disfigured fetus-like pupa, and then a clone of Rex Splode. What is most annoying about this change is the loss of Zachary Quinto as Robot; however, as Rudy, Ross Marquand disappears into another role, as one of the most diverse actors on the show, proving that he deserves much more adulation.

Rudy obtains his body through methods that are morally grey and does so much to the dismay of many of his team members. This makes Robot/Rudy one of the most complex characters in the show, willing to bend the rules for his own purposes and never truly compromising his morals, which is interesting in a show that has many people questioning their roles.

The one thing that I am tired of already, is the ongoing drama with Amber. As a reader of the comic, I hated Amber, and I hate her here as well. Granted, Mark isn’t a great boyfriend, but to actively know that he is a superhero, not say anything about it, and still be mad at him for lying seems hypocritical. I am about ready for the show to move on to greener pastures, as any scene with Amber has boiled down to the same repetitive shtick over and over. We get it, it’s an homage to Spider-Man and Mary Jane, but it definitely drags each episode down with each occurrence, and frankly, I’ve lost all interest in their relationship.

The reintroduction of the Immortal is a welcome distraction, if only fleeting. Again voiced by Marquand, the Immortal serves to show the world the true Omin-man, in a brilliant scene of death and destruction. What I love about this episode is that we truly see Nolan’s conflicting emotions, we know he feels that he needed to commit these acts, but it is also apparent that he is devastated at the toll it has taken on his family. That being said, there is nothing more entertaining than an Omni-man rampage, especially when he outmatches his opponents and completely decimates them.

My favorite part of the episode is in the final moments when Omni-Man stands defeated. He has not been physically bested, but he has been exposed, not only to the world but to his son as well, something that he was not ready to come to terms with. There comes a time in our lives when we realize that our own fathers are fallible, no longer the larger-than-life figures of our childhood.

Interestingly, this idea can exist in a world where your father is the most powerful god-like entity on Earth. Mark must now face, not only the fact that his father is flawed, but is potentially the complete opposite of what he embodied.

Invincible is streaming now exclusively on Amazon Prime Video. Make sure to catch the epic season finale this Friday!