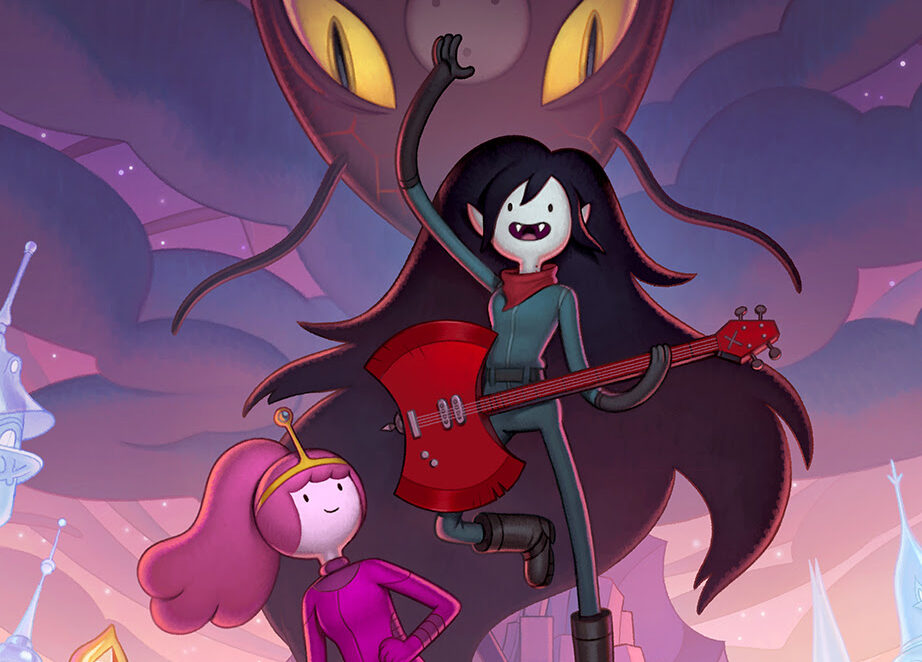 Here’s a peek of the series featured and a glimpse of what assets were shown:

Adventure Time: Distant Lands – Obsidian
Marceline and Princess Bubblegum journey to the imposing, beautiful Glass Kingdom – and deep into their tumultuous past – to prevent an earthshaking catastrophe.

Infinity Train: Book 3
Grace and Simon are the leaders of the Apex, an anarchic group of kids on a mysterious train. During one of their destructive missions, Grace and Simon get separated from the rest of the Apex and must find their way back. As the duo navigate through the myriad worlds of the train, they meet Hazel, an optimistic young girl, and Tuba, her gentle gorilla companion. Will Grace and Simon find new inspiration in Hazel’s innocence, or will the ways of the Apex recruit yet another aboard the train?

Tig n’ Seek
From Myke Chilian and Cartoon Network Studios, Tig n’ Seek follows an upbeat and eccentric 8-year-old boy named Tiggy and his cat, Gweeseek. Tiggy not only works at the Department of Lost and Found, finding lost items all throughout Wee-Gee City, he lives there too! Though he tries to help his friends whenever he can, his over-eagerness and neurotic quirks often lead to chaos in the Department.

Tiggy’s partner and best friend is his cat, Gweeseek. She’s a graceful, friendly kitty who appears to be a normal cat, but is also capable of inventing extraordinary gadgets to help her friends in times of need. Join Tig n’ Seek as they navigate the wacky day-to-day dilemmas of working at the Department of Lost and Found.

The Fungies! from Stephen Neary and Cartoon Network Studios, is a prehistoric comedy that explores Fungietown through the whimsical quests of Seth, a young student at Fungietown Elementary. Seth loves science and sharing his exciting discoveries with all his Fungie friends. But in his search for the ultimate scientific adventure, Seth often stirs up trouble for Fungietown’s colorful inhabitants leading to hilarious and heartwarming surprises.

Summer Camp Island
Welcome to Summer Camp Island, an animated series created by Julia Pott. Based on the critically acclaimed short screened at Sundance Film Festival, Tribeca Film Festival and SXSW, the series follows best friends Oscar and Hedgehog as they learn that their camp is on a magical island, and that instead of making potholders–they’ll be making friends with monsters and yetis.

The counselors? Well, they’re witches. And the cabins? Those were built by aliens. The moon? OK, it is the same ‘ole moon, but here, he talks. As Oscar and Hedgehog spend their summer days having strange encounters with mystical creatures, they begin to discover their own magical potentials.