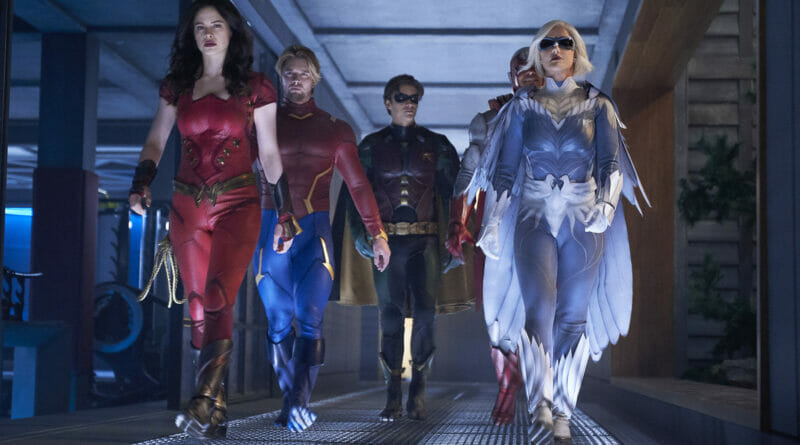 We recently had the opportunity to sit down and talk to Titans stars Conor Leslie and Alan Ritchson during a press interview session for their upcoming film Dark Web: Cicada 3301. While we cannot yet release the full interview, we did have a chance to ask the actors about Titans Season 3. During the interview, I immediately jumped at the opportunity to ask Conor Leslie about her role as Donna Troy and her return in Titans Season 3 as Troia. Let’s be real the cat’s out the bag.

Conor Leslie has been spotted on the set of Titans Season 3 not once, but twice. Giving fans a good notion that Donna would be returning again to some degree. While I caught her somewhat off guard about her return as Troia, and while she did not fully confirm to me that she would indeed be returning as Troia, although she was extremely coy about it. She did, however, confirm her return as Donna Troy in “some scenes” along with Alan Ritchson. Her reaction to my question said more than enough about her possibly portraying the live-action version of Troia as well as Donna Troy once again, her coyness about Troia specifically however spoke volumes!

Can I have you both confirm that you are still currently filming the new season of Titans, correct? “mmm-hmm” says Leslie as Ritchson gives a subtle “that’s right…”. Both Conor and Alan laugh as they know that I’m trying to dig for more gold out of this interview.

I know you guys can’t say much about it, but we kind of do know a little bit about Donna Troy. We hear she’s coming back to some degree. “I do play Donna Troy,” says Leslie while laughing. You do play Donna Troy, last season Donna was sent off to Themyscira, are we getting you back as Troia?

“I am filming scenes, where I play Donna Troy,” says Leslie, in which I reply “scenes in which you play a version of Donna Troy”. “I play Donna Troy and I’m very happy (laughs) to be playing (laughs again)…Alan is in some of those scenes with Donna Troy”

While we do not know what actually happens with Donna Troy once she arrives at Themyscira and how she is resurrected. Given Raven’s determination to head to Themyscira to see how she can help in trying to bring Donna back, all signs are pointing at Conor Leslie donning the moniker of Troia even if it’s temporary.

After not fully getting a verbal answer from Conor Leslie about Troia, we switched gears to Alan Ritchson who plays Hank Hall/Hawk, as we try to get a little more insight into his character and his arch in the upcoming season. “I don’t know man, I don’t know. All I know is that I love playing this character man. You know he’s such hot head, a man of action, a man of few words.” “He’s funny too” adds Conor Leslie.

“It’s fun, he’s volatile in a way you know, and it’s been a blast playing him. And Titans Season 3 is the best, the most well-constructed season that we’ve had. We sort of focus on all of the best characters and storylines and the payoff for everything is pretty great. I think that I can say without a doubt that this is the best season we’ve ever had and I think people are going to enjoy it”. says Ritchson.

Both seasons of Titans have been met with rather mixed reviews and fans have longed for the writing and storytelling of the series to have a turn for the better and if we take Alan’s word for it, it seems that their new home, HBO Max has put together a much better team in order to deliver a much better season.

Titans Season 3 will see the Titans make their way over to Gotham City where we will see the introduction of Barbara Gordon and Scarecrow. Something both Conor Leslie and Alan Ritchson were able to confirm to me immediately since this information has been reported by multiple outlets and Hollywood trades.

“Yup. Yup. We can definitely confirm those reportings,” says Conor Leslie. “There’s a lot of things happening and all the people we have added to our cast are just wonderful, more brilliant people added to the pot.”

Titans Season 3 will also see the full introduction of Blackfire and Jason Todd’s full transition into his alter ego the Red Hood. Titans Season 1 & 2 are streaming now on HBO Max.