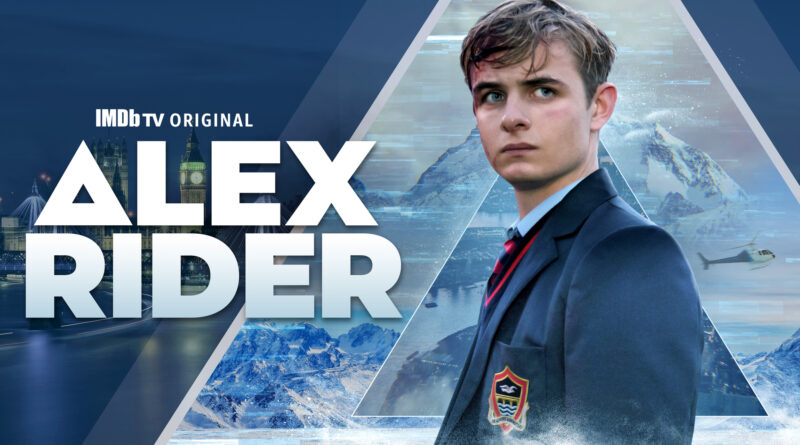 
Alex Rider balances action and tech in a way that feels tangible. Despite being slow to start the viewer is given cliffhangers and plot twists to keep them engaged. Once it picks up the pace you’ll be hard-pressed to turn away.

For fans of the espionage genre, Guy Burt and Amazon Prime present Alex Rider, an adaptation of a series of teen spy novels by British author Anthony Horowitz. The show follows Alex Rider, a reserved high school student living with his Uncle Ian and caretaker, Jack Starbright as they descend into the dangerous world of MI6. Contrary to the box-office bust of 2006’s Stormbreaker, this new series matures the protagonist Alex Rider and the atmosphere he engages with. The series skips the first book and jumps right into the plot of Point Blanc, which takes us to a boarding school in the French Alps where some classic world-domination at the hands of a mustachioed villain is underway.

The series is cast well, with Otto Farrant delivering an understated and sincere portrayal of the young Rider, who seems to gracefully bounce between his raw emotion and surprisingly adept handling of the obstacles he faces. Brenock O’Connor (who you may recognize from GOT) plays Alex’s best friend and serves to lighten up the more serious notes within the show.

The cast of MI6 Agents was played well but didn’t shine the way I’d prefer, especially Mrs. Jones’ character who is assigned as a caretaker for Alex when there can be so much more to her character, which I’m hoping will unfold in further seasons. The muted color palette and stylish aesthetic help bring a mood of tension to a show that would otherwise be scoffed at.

Alex Rider’s uncle Ian has been under the guise of a “boring banker” who has taken Alex under his wing and had him subtly trained to be a capable agent. Not buying into the “car accident” cover story, Alex is desperate to find the truth of who the real killer is and why Ian had to die. Alex has been unknowingly preparing to be a secret agent his whole life, somehow possessing the ability to scale walls, pick locks, and even expert level Krav Maga of all things.

Once Alan Blunt, the ambiguous head of MI6, sees Alex’s handling of the death of his uncle Ian, he sees an opportunity to manipulate him into participating in a secret mission to find out what’s really going on at this school for troubled teen heirs, Point Blanc. Being granted this mission wasn’t easy, for young Alex was put through the wringer and kidnapped by agents as a test to see his endurance in times of duress. Needless to say, he passed with flying colors.

Alex agrees to take on the identity of Alex Friend, son of billionaire David Friend and leaves his regular life on pause to go investigate this mysterious school. After facing the insufferable sister Fiona Friend and her sadistic boyfriend Rafe, Alex meets Eva Stellanbosch, the school dean for a pre-screening and escort to the campus.

Once he convinces Stelanbosch (or who the students call, Stellanbitch) with her cold, villainous exterior that he’s this billionaire teen with a bad attitude they head up to Point Blanc in the icy French Alps. Once there, he meets Sasha, Laura, James, Arrash, and Kyra, the other troubled teens sent to this very unique boot camp. It already appears suspicious that there are only 6 students alongside him, but Alex carries on in his role as he digs into the world of Point Blanc.

He eventually discovers the sinister plot behind the Gemini project, run by the Dean of students, the dark and furrowed Dr. Greif, who low key gave me Nazi vibes. The action begins to pick up as Alex is discovered to be a double agent and is put in danger, he escapes the compound on an ironing board down the snowy mountain. Things eventually clear up and once Alex is back home, it is foreshadowed that the can of worms has just only opened.

At first, I was reluctant to give a show geared toward teens a chance but it elevates beyond that and bares its teeth just enough to fill the gap between young and old audiences. The series takes its time to set the pieces in place so don’t expect any James Bond energy until episode 4. There’s less emphasis on cheesy gadgets and more on straight up action, so I’m grateful for that. Honorable mention goes to a digital elevator shaft where one step and you’ll fall to your death and an MP3 player that makes calls. Long gone are the days of toothpaste that can melt through walls (I’m looking at you, Stormbreaker).

Alex Rider balances action and tech in a way that feels tangible. Despite being slow to start the viewer is given cliffhangers and plot twists to keep them engaged. Once it picks up the pace you’ll be hard-pressed to turn away. Keeping in mind the bleak reality we’ve endured this year as 2020 comes to a close, we all could use some escapism in the form of teens blessed with next-level secret squirrel skills. Whether you’re familiar with the Alex Rider series or not give this palate-cleansing thriller a shot because you’ll be as pleasantly surprised as I was.