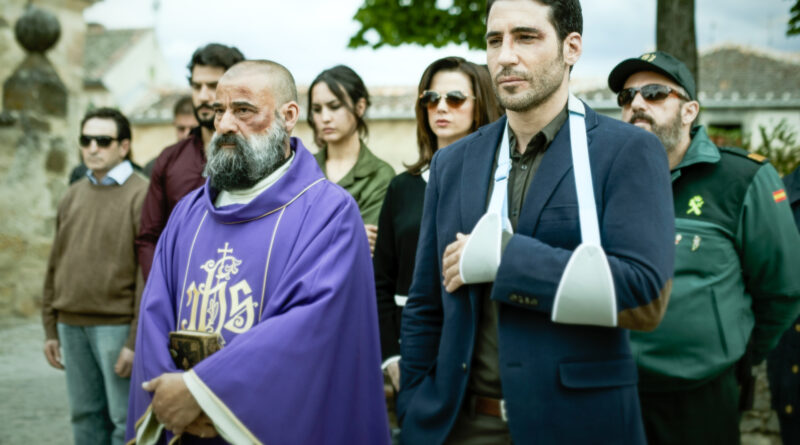 
After the startling events from its premiere episode, 30 Coins dials it down a bit but solidly delivers the thrills to keep this series captivating

Episode 2 of 30 Coins titled ‘Ouija’ toned things down a bit after its startling and guns blazing entry point back in episode one but its steady pacing and growing thrills deliver another solid entry for the new series. This episode starts with a group of teenagers who meet up in a cemetery to start a seance and to commune with the dead using an ouija board. Unfortunately for the groups of teens, things go awry, and a member of their group suddenly vanishes after accidentally communing with the spirit of Giacomo.

When the local police are informed of the incident, the coffee shop owner’s son is immediately blamed for the teen’s disappearance. The local police including Father Vergara and the town’s Mayor, alongside Elena begin to further investigate the disappearance of this girl. As the investigation deepens, we learn more about Elena’s past and her days of trying to commune with the dead using an ouija board during a conversation with one of Sole’s friends.

As she’s given the final details of information off-screen, Elena meets with Father Vergara and assumes he has something to do with Sole’s disappearance. Though things have been insanely off ever since Vergara arrived at this town, he manages to veer everyone off his back when it comes to them blaming him for all that’s been happening. After the events of episode one, how does anyone expect Elena not to blame Vergara for what’s been happening?

And just for added context, Elena’s disdain for Vergara starts and further grows after the unraveling events of episode one and how Antonio reveals that everything that is happening is because of Vergara’s sins. Ultimately revealing that the coin that Elena comes into possession of is what’s essentially brought these occult events to her town and that Vergara and the coin itself have a deep connection dating back to the past during an exorcism he was performing.

Later on we see another one of Sole’s friends having a chat with her friends via text message when suddenly a message from Sole appears in the group chat, and the friend receives a call from Sole saying that in order to bring her back, they’ll have to perform a seance once again. Elena is then informed about the phone call and joins the group of friends in order to perform the seance and bring Sole back.

Giacomo (Sole) once again asks Elena for the coin through the ouija board. Elena successfully communes and brings Sole back from what’s to be considered the spiritual world. Although Sole is back, she is no longer herself as she is now fully possessed by Giacomo as Carmen was back in episode one.

Things get even crazier as an old guy dies shortly after Sole tells him she will die later in the night thus further sending the town into disarray. Sole later explains to her friend that she is able to see the aura of life surrounding humans and she can tell when are people close to meeting their end.

Children are often covered in a white aura to what I interpreted as showing the child’s innocence since teens and adults (younger or older) have a blue aura signifying that they are full of life. When someone is surrounded by a red aura or an aura that is red but almost black, that means that that person will soon die. It is not clear whether or not Giacomo speeds that up or if that’s the spirit’s way of picking and choosing who can and cannot die at his command.

Unfortunately for the town and its Mayor Paco, he seems to keep getting pulled into what his wife believes to be Elena’s shenanigans or lack of a better word, insanity. To me it seems like Paco, despite all the crazy stuff that is going on is developing some sort of feelings for Elena and his wife has picked up on that, so she tries to persuade him into leaving her alone, and it’s not his problem to deal with all that’s going on in this town when it comes to the occult. She emphasizes that he has other responsibilities, businesses to run and a reputation to maintain and that should be his only focus.

Sole in an attempt to free herself from the grips of Giacomo tries to kill herself but is ultimately saved by Father Vergara. Despite those efforts, she reveals to him that this is all happening because he is not complying with Giacomo and the Roman church’s demands to return the coin that belongs to them. Seeing how he isn’t complying, Sole reveals that she sees a red aura around him and that he will die later that night.

Later that night, Sole, now fully controlled by Giacomo arrives at Vergara’s house and inflicts damage upon herself, threatening Vergara that she will continue to do so until he returns the coin. After cutting open her cheek, Vergara takes Sole to Elena’s house and breaks in in order to find the coin.

After Elena arrives at her home, things get out of control as Sole (Giacomo) is in full-on attack mode in order to get this coin. In the process, Sole stabs and severely injures Elena’s friend Rique and slightly hurts both Elena and Father Vergara. Father Vergara manages to bring Sole back and give her a momentary sense of control to suppress the attack, thus saving the day.

It is abundantly clear that this town has gone to sh*** ever since the arrival of Father Vergara and that the townsfolk are now paying for all of his sins which he theoretically hasn’t atoned for. Though he wants no quarrel with Giacomo, he fails to realize or at least fails to take any accountability for what’s going on when all signs point to him; thinking he’s already paid for his “crimes”.

As Paco tries to get Elena’s side of the stories, she learns that Father Vergara didn’t provide him with the same version of the story Elena is providing him with, which is a recurring theme since episode one and I’m only expecting it to continue as the series goes along.

We also see Antonio communing with the spirits from the Roman church who want the coin and see that he is still being used for their agenda and pursuit to reclaim the coin.

30 Coins episodes 1 and 2 are streaming now on HBO with new episodes releasing every Monday at 9pm ET.